Turning Points in the Expansion of Christianity

From Pentecost to the Present 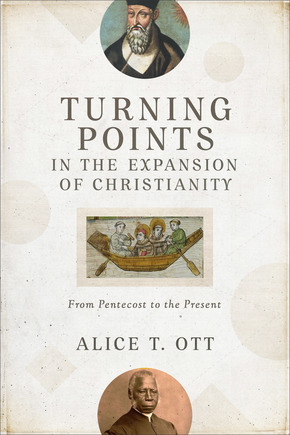 How did Christianity develop and grow into a religious movement, casting its shadows and light into almost every corner of the world?

This readable survey on the history of missions tells the story of pivotal turning points in the expansion of Christianity, enabling readers to grasp the big picture of missional trends and critical developments. Alice Ott examines twelve key points in the growth of Christianity across the globe from the Jerusalem Council to Lausanne '74, an approach that draws on her many years of classroom teaching. Each chapter begins with a close-up view of a particularly compelling and paradigmatic episode in Christian history before panning out for a broader historical outlook. The book draws deeply on primary sources and covers some topics not addressed in similar volumes, such as the role of British abolitionism on mission to Africa and the relationship between imperialism and mission. It demonstrates that the expansion of Christianity was not just a Western-driven phenomenon; rather, the gospel spread worldwide through the efforts of both Western and non-Western missionaries and through the crucial ministry of indigenous lay Christians, evangelists, and preachers.

This fascinating account of worldwide Christianity is suitable not only for the classroom but also for churches, workshops, and other seminars.

"Because Alice Ott's new history takes seriously the essentially missionary character of Christianity (in the past as well as the present), it makes possible a truer, fuller, and more comprehensive understanding of the faith itself. Creative discussion of mission history in this well-researched and clearly written book make it an ideal resource for school, church, and personal instruction."

"The time is past when historians of global Christian missions focused narrowly on what Western missionaries did when they traveled overseas. Today scholars such as Ott feature the roles of local converts and evangelists in the growth of Christianity as well. This is a fantastic book. Using the turning points method of historian Mark Noll, Ott tells the story of the spread of the gospel since the apostolic age by zooming in on kairos moments in the history of Christian witness across cultural, linguistic, and ethnic frontiers. I recommend her work wholeheartedly as a textbook in what used to be called history of missions classes in colleges and seminaries."

"How and why did Christianity spread across the globe? Alice Ott answers this question with scholarly insight and a storyteller's knack for illuminating crucial events. Taking the whole of Christian history, she identifies important new movements in God's mission to the world. She challenges mission histories that have focused on pioneering white men, and she shows a cosmopolitan endeavor to explain the gospel afresh in new contexts. Understanding our past allows us to act well in the present. This book introduces a fascinating history that thoughtful Christians will want to ponder as they engage in the world today."

"Using Mark Noll's famous turning points framework, Alice Ott provides a much-needed big-picture perspective on the historic expansion of the global Christian church. With particular attention given to non-Western mission movements and pre-Protestant Reformation activity, she shows that Christianity has truly been a global faith."