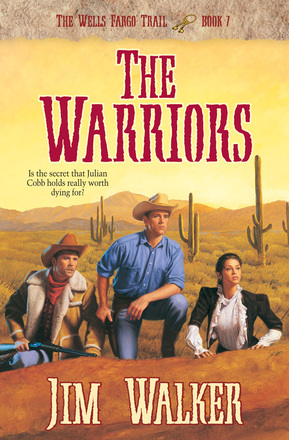 In the Tradition of the Great American Western

Crafting another action-filled story in THE WELLS FARGO TRAIL series, Jim Walker brings to his growing circle of readers all the suspense and mystery they expect in this unique American writing category called Westerns. Writing from a setting in the 1870s, Walker has brought to life the men and women of the West who survived the Civil War and are seeking a new life on the frontier.

In The Warriors, Zac Cobb and his brothers Joe and James are asked by the Secret Service to go into Mexico and rescue their bandit brother Julian, who is being held there as a prisoner, yet is also wanted by the federal government. Zac is suspicious of the government's motives in the matter, and having become engaged to Jenny Hays, he has no desire to risk his life or his murderer brother.

But when Joe and James decide to go, on the way escorting an aristocratic Mexican woman and her daughter to near where Julian is being held, Zac shadows them across the desert and discovers they are not alone. In army patrol, scalphunters, a band of Apaches, and the Mexican army are all involved. Is the secret what Julian Cobb hold really worth dying for?