More Than a Theory

Revealing a Testable Model for Creation 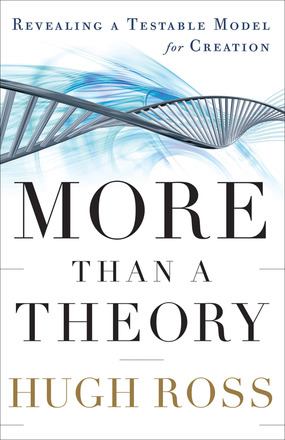 The year 2009 marks the 150th anniversary of the publication of Charles Darwin's On the Origin of Species. Alongside that event, there are many Darwin Day celebrations planned to acknowledge his 200th birthday. Add to these the virulent attacks of the New Atheists, led by Richard Dawkins. Bible-believing Christians will be left increasingly challenged with the theory of evolution as the only model to explain the origins and age of the universe.

In More Than a Theory, Hugh Ross, founder and president of Reasons To Believe, offers discerning readers a comprehensive, testable creation model to consider as an alternative. This fascinating resource will educate readers with a direct response to the recent and well-publicized challenges from aggressive atheists. In doing so, it also reminds the scientific community of what constitutes good science. Furthermore, it will supply Christians with the scientific information they need to defend their convictions that the God of the Bible is the Creator.

Complete with several appendices that put common documents and stories to the same test, More Than a Theory is a bold, brave, and unapologetic work of apologetics that will stir much discussion in both the scientific and religious realms.

"The more we discover about the universe the more I appreciate our Creator. And that's why I'm grateful for Hugh Ross. This book will not only expand your appreciation of God. It will stretch your faith."--Mark Batterson, lead pastor, National Community Church; author, Wild Goose Chase

"Today, the benefits of the scientific community are sometimes mixed, especially when faith in the Creator is mocked as a concept. In this milieu, I know of no leader standing as a voice with clarity, dignity, and respectability like Hugh Ross. He provides believable and balancing insights that strengthen reasons to believe for any honest, thoughtful hearers. Scholarly insights join to an irenic tone--the truth and the temperament he brings unite to gain a climate that is at once enlightening and engaging. For my part, I must add that Hugh's proven character and fidelity to God's Word compounds my gratitude for his work. More Than a Theory is another drink from the well of wisdom that has been hammered out on the anvil of reason, verifying that tough minds can be found among Christian scholars without having the flavor of bigotry or condescension toward not-yet-believers."--Jack W. Hayford, president, International Foursquare Churches; chancellor, The King's College and Seminary; founding pastor, The Church On The Way

"More Than a Theory provides a valuable overview of the many explanations of nature and human origins that compete for acceptance in modern culture. Rather than limiting this comparison to a single field such as biology, Hugh Ross compares these explanations with respect to their ability to adequately account for over 100 distinct findings from natural and social sciences. Ross effectively argues that by imposing artificial and unnecessary restraints on scientific inquiry, science loses its claim as a search for truth and simultaneously makes science less attractive to inquiring young minds. Removing those constraints unleashes the power of unbiased exploration in the quest for truth."--Carl A. Koval, professor of chemistry, University of Colorado

"In the physical sciences, we are continually concerned with the question 'Can a theory stand up to the latest experimental results?' Occasionally, theories that have been useful for many years are abruptly assigned to the trash can. In this book Ross suggests a great many tests for his understanding of issues related to origins. I think Ross's perspective helps to put the whole discussion in a rational context. It also calls into question the sometimes-heard hypothesis that standard evolutionary models are not falsifiable. When all sides play by the same rules, the conversation is elevated, and I hope this will be the case in future discussions of origins."--Henry F. Schaefer III, Graham Perdue Professor of Chemistry; director, Center for Computational Quantum Chemistry, University of Georgia

"To all who think that belief in a Creator requires a blind leap of faith, this book serves strong notice otherwise! The Creation Model is not only testable--it passes multiple scientific tests with flying colors. But don't take my word for it; read More Than a Theory yourself to see how Hugh Ross wields data, logic, and evidence to make a powerful and convincing case."--Mark Mittelberg, author, Choosing Your Faith, and coauthor, The Unexpected Adventure

"Ever since I built a telescope in the seventh grade, I have been fascinated by astronomy and the physical laws that govern our universe. Dr. Hugh Ross reinvigorates that interest with a compelling presentation of the order and magnitude of creation from the smallest subatomic particle to huge galaxies billions of light years distant from Earth. His latest book is a must-read for anyone interested in our origin."--Loren Leman, P.E., former lieutenant governor, Alaska

"This is a bold presentation that integrates many scientific disciplines into a fascinating, comprehensive view of the universe. Given the Big Bang's well-accepted implication of a metaphysical cause for our universe, and string-theory awareness that reality exists in more than four dimensions, it's worth the effort to reconcile artificial disciplines of pervasive physics with life science. The Bible's challenge to test all things was bundled with a model procedure known today as the scientific method. The book contains concise but specific, scientifically testable proposals representing a spectrum of philosophical positions from materialistic evolution to theism to intentional design on an ancient earth to the very distinct position of young-Earth creationism. The well-considered history of court decisions and thought-provoking discussion of the Gambler's fallacy should not be missed. I invite anyone interested in this unnecessarily contentious and timely subject to take some reading time for a stimulating challenge to clarify issues and even be amazed at this big picture."--Lynn Carta, research biologist, Silver Spring, MD

"Ross' contribution is a valuable one for Christians searching for solid proof of divine origins."--Charisma