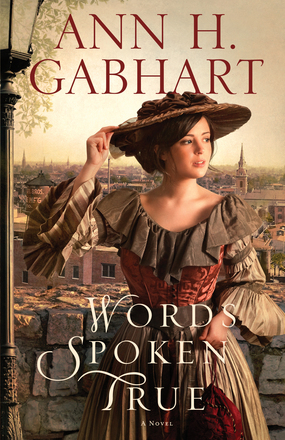 One woman stands ready to defend her newspaper . . . even if it means losing out on love

Adriane Darcy was practically raised in her father's newspaper offices. With ink in her veins, she can't imagine life without the clatter of the press and the push to be first to write the news that matters. Their Tribune is the leading paper in Louisville in 1855.

When Blake Garrett, a brash young editor from the North with a controversial new style of reporting, takes over a competing newspaper, the battle for readers gets fierce. After Adriane and Blake meet at a benefit, their surprising mutual attraction is hard to ignore. Still, Blake is the enemy, and Adriane is engaged to the son of a powerful businessman who holds the keys to the Tribune's future. Blake will stop at almost nothing to get the story--and the girl.

Set against the volatile backdrop of political and civil unrest in 1850s Louisville, this exciting story of love and loyalty will hold you in its grip until the very last page.

"I've come to expect wonderful books from Ann Gabhart, and her latest historical romance, Words Spoken True, doesn't disappoint. In this novel, Gabhart gives readers a peek into the lives of two news reporters--one a man and one a woman--both intent upon creating the best newspaper in Louisville, Kentucky. Amid unsolved murders, riots, and adversity, the ability to trust each other and trust God is put to the test. Gabhart weaves a story that is a page turner from beginning to end. This is one you'll highly recommend to friends."--Judith Miller, author, Daughters of Amana series