Word Gets Around, Repackaged Edition 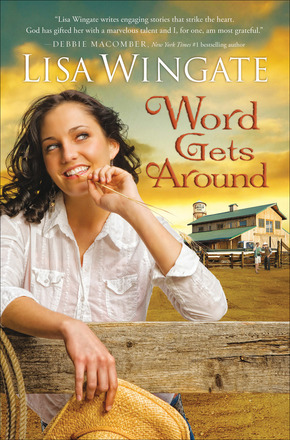 Lauren Eldridge had avoided returning home to Daily, Texas, until her father confesses to being in over his head. Paying back an old favor, he's invested in a horse that's supposed to be the star of a new Hollywood movie. Only the horse won't behave. And Lauren is the best trainer in the state. Convinced to return, she soon finds more than she bargained for when the movie's screenwriter turns out to be leading-man handsome.

This movie may be Nate Heath's last shot at turning his career around. He didn't have high hopes at first, but the town of Daily may be just what everyone needs to find hope and healing. And maybe even a little romance.

"Hollywood comes knocking in Wingate's second book about the delightful small town of Daily, Texas (Talk of the Town, 2008). Justin Shay, a self-indulgent screen idol, decides to make a movie of 'The Horseman,' even though the script has been rejected time after time. He packs up his entourage--including his best friend, writer Nathaniel Heath--and heads to Daily, hometown of Amber Anderson, Justin's current girlfriend. Lauren Eldridge left Daily behind and is now a teaching assistant at Kansas State University. She has mixed feelings when her father, who raises horses for Hollywood movies, calls and begs her to help with the horses on the set. Each chapter is narrated by a different character, and each character is lovingly crafted. Lauren has frequent and hilarious flights of fancy; Nathaniel remains deeply loyal to Justin, his friend since their days in foster care; and Amber remains unexpectedly innocent. Wingate's idyllic small-town atmosphere in this sweet romance makes for a charming read."

"Wingate's sweet writing style incorporates the best of romance, friendship and small-town life. The characters resound with down-home charm and light up the pages with touching spiritual insight.

"Lauren Eldridge moved away from Daily, Texas, and ranch living as soon as she could. Now her father is in a bind and asks her to come home to help train a horse for a movie.

"Nate Heath has long been the support system for his friend, superstar movie actor Justin Shay. When Justin asks Nate to write a screenplay for a movie filming in a small Texas town, Nate's not sure it's a good idea. Sparks fly when Nate and Lauren meet, but the two are in for much more than they originally imagined when they agreed to help."
4 stars