series: Only In Gooding 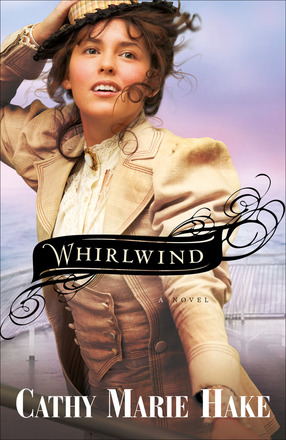 When Millicent Fairweather boards the Opportunity to journey to America, she's confident a better life awaits. Before she knows it, she's taken out of steerage to be a nanny to a delightful little boy who quickly wins her heart. Widower Daniel Clark isn't sure about the pretty bundle of energy who takes the nanny position, but he figures the voyage is only one week.

When disaster strikes, Daniel seizes the chance to rescue Millicent and her sister. A most convenient marriage ensues...only Daniel realizes his heart has been lost to Millicent, while she views it all as a business arrangement. Will this whirlwind marriage have a chance as Daniel sets out to woo his oblivious wife?

"In the spring of 1892, sisters Millicent and Isabelle travel from London to America in hopes of making a better life. On the ship is Daniel Clark who hires Millicent to nanny his young son. Tragedy ensues after landing at Ellis Island, followed by a marriage proposal which at first appears to be simply a practical solution. The story follows them to Texas where they settle and open a store. Readers are drawn to the antics of these characters as they come to life, ultimately finding resolution, leaning on a strong faith throughout."
--RE, Libraries Alive

"In 1892, the Opportunity sails out of London to America with two families on board, one a former nanny, her sister and brother-in-law, the other a widower wit his infant son. Need and circumstance weave their lives together, from Ellis Island to Texas, creating relationships that teach 'to overcome sorrow you need time and tenderness and tears.' A sweet Christian romance touched by humor and suspense by an Anaheim author with 20 novels to her credit."
--Orange Coast, March 2009

"Cathy Marie Hake's Whirlwind is well named; it's a traditional historical romance that moves from England to Texas without a hitch. After Millicent Fairweather loses the two little girls she's been nanny to for years when their father unaccountably decides to send them to boarding school, she sets off for America with her sister and brother-in-law. When widower Daniel Clark discovers his young son's nursemaid has fled the ship, Millicent finds herself employed. Millicent is something of a super nanny who soon winds over her young charge and, unbeknownst to her, his father. Although they end up marrying for the sake of appearances, each is hiding romantic feelings for the other. this is classic Christian fiction; the characters are devout, and it is common for them to talk with and about God. It is tempting to complain about the too-neat ending, or to find Daniel too perfect. But this frothy tale will entertain fans of inspirational fiction and romance."
--Joanne Collings, Bookpage, September 2008

"Hake knows what readers want: romance, laughter and big-hearted characters who know that God never closes one door without first opening another. This story will stay with readers long after the cover is closed.

"In 1902 London, Millicent Fairweather is heartbroken when her employer informs her that he will no longer need her as a nanny. She decides to go with her sister, Isabelle, and Isabelle's husband to America.

"Daniel Clark needs to find a nanny for his son and hires Millicent for the task. When a tragedy occurs on the ship, he marries her so that she and her sister aren't sent back to London. While it's only a marriage of convenience for her, Daniel loses his heart and has his work cut out to prove to his wife that their whirlwind marriage is the real deal."
4 stars
--Patsy Glans, Romantic Times Book Reviews, September 2008

"Whirlwind is a charming historical novel that makes an exceptional read! Its author, Cathy Marie Hake, is an outstanding historical novelist but one that many readers have not yet been introduced to. She is currently new to my 'Favorite Authors' list and I eagerly wait for her next novel. Whirlwind, her latest novel, captured my interest from the first page. Her characters seemed as real as your next-door neighbors! This historical novel has everything--loveable characters, laugh-out-loud passages, suspense, and lots of fascinating historical details.

"As a nanny, Millicent Fairweather has poured out all of her energy talents and love into her care of two lovely, little girls, Audrey and Fiona, only to suddenly see them sent off to a boarding school without any explanation. Disheartened and out of a job, 'Millie' agrees to travel to America with her sister Isabelle and Isabelle's husband Frank to begin a new life there. They all board the ship Opportunity.

"Also on board the same ship are widower Daniel Clark and his young son, Arthur, who plan to travel to Gooding, Texas to operate a mercantile there. Daniel's troubles begin when his nanny leaves him stranded on the ship and he is in dire need of a nanny. Millicent enters his cabin and his life with boundless energy to take over the care of his son, and it is mutually agreed that the position is hers only until the voyage is over.

"The ship stalls and the voyage is extended. Daniel finds himself becoming more intrigued by Millie as the days go by. Then an unspeakable tragedy occurs and a 'whirlwind' decision is made that will deeply affect each of their lives irrevocably. Will Millie and Daniel's blossoming love survive all the obstacles that come their way?

"Whirlwind deals with the difficulties of nineteenth century women faced when immigrating to the United States. All immigrants not initially approved upon arriving in America were held on Ellis Island, outside of New York City, for either later approval or deportation back to their native country. Each woman needed a male family relative or male sponsor to sign papers that he would be responsible for her welfare financially. Sometimes illnesses contracted while aboard the ship also resulted in immigrants being sent back to their native land.

"Whirlwind will keep readers on the edge of their seats as this tender love story unfolds. They will greatly enjoy the witty dialogue and the other touches of humor throughout this novel. The author, Cathy, also freely uses Scripture passages throughout the book as Daniel's faith is tested and he searches for wisdom to deal with several unexpected tragedies and his intriguing but lovable nanny.

"Daniel and Millie are the heart of this novel. These endearing but imperfect characters will capture the readers' hearts from the beginning. Both their 'whirlwind' romance and their critical decisions provide enough suspense to keep readers turning the pages until they reach the end.

"Cathy Marie Hake is a licensed nurse who worked for many years in an oncology unit before shifting her focus to perinatal care. The author of over twenty novels, she lives with her husband and two children in Anaheim, California. I especially enjoyed one of her earlier novels, Letter Perfect."
--Marijane Troyer, The Budget