Where the Last Rose Blooms 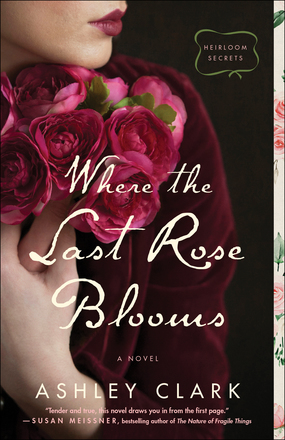 "Tender and true, this novel draws you in from the first page."--SUSAN MEISSNER, bestselling author of The Nature of Fragile Things

Alice runs a New Orleans flower shop alongside her aunt, but thoughts of her mother, who went missing during Hurricane Katrina, are never far from her mind. After getting off on the wrong foot with a handsome yet irritating man who comes to her shop, Alice soon realizes their worlds overlap--and the answers they both seek can be found in the same place.

In 1861 Charleston, Clara is known to be a rule follower--but the war has changed her. Unbeknownst to her father, who is heavily involved with the Confederacy, she is an abolitionist and is prepared to sacrifice everything for the cause. With assistance from a dashing Union spy, she attempts to help an enslaved woman reunite with her daughter. But things go very wrong when Clara agrees to aid the Northern cause by ferrying secret information about her father's associates.

Faced with the unknown, both women will have to dig deep to let their courage bloom.

"Readers will be enchanted by Ashley's authentic portrayal of Charleston and its rich history and beautiful charm."--AMANDA DYKES, author of the 2020 Christy Book of the Year, Whose Waves These Are

"This book moves seamlessly between timelines, stitching together a story of love, hope, and courage amidst prejudice and loss."--HISTORICAL NOVELS REVIEW

"With warmth and insight, Ashley Clark skillfully weaves a dovetailed then-and-now story highlighting what it means to face heartache and hardship with character and courage. Tender and true, this novel draws you in from the first page."

Susan Meissner, bestselling author of The Nature of Fragile Things

"In this satisfying conclusion to the "Heirloom Secrets" series, Clark deals deftly with sensitive issues including slavery, persistent racism, and mental illness. . . . Every character is written as a multifaceted human being without cliché . . . Libraries will want to buy the whole trilogy to satisfy dual timeline fans of authors such as Rachel Hauck, Heidi Chiavaroli, and Kristy Cambron"

"Clark completes the Heirloom Secrets series with a suspenseful dual-narrative in which love blossoms across time. . . . Clark offers well-developed female characters who discover they have deep inner strength. This one will keep readers eagerly turning pages."

"Once again readers are treated to original storylines, memorable characters, and a compulsively entertaining read from cover to cover."

"This story, highlighting the bond between mothers and daughters, includes scenes depicting the horrors of slavery but also reminds us that through fires and floods, God is always with us."