Wrestling with Jesus’s Call to Nonviolence in an Evil World 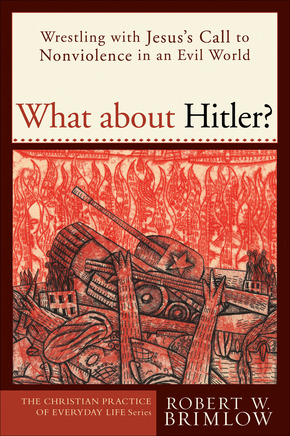 "The clarity and simplicity of Brimlow's writing combine to make this book an excellent addition to the required readings of a political ethics course. The author's honesty and passion to follow Christ will engage students at both an intellectual and emotional level; a combination that should encourage lively and thoughtful class discussion on this important and controversial topic."--Stephen Vantassel, Evangelical Review of Society and Politics

Jesus's admonition to love our enemies and pray for those who persecute us is a difficult injunction to put into practice. Is it ever permissible for Christians to respond to or retaliate against unmitigated evil? Robert Brimlow grapples with this thorny question in What about Hitler? Throughout the book, he elegantly weaves together scriptural meditations, personal vignettes, and lucid philosophical thinking on various Christian stances toward war and violence. In addition, Brimlow delves into the mind of German pastor and theologian Dietrich Bonhoeffer, author of The Cost of Discipleship, who eventually conspired to assassinate Adolf Hitler.

Ultimately, Brimlow emerges as a staunch defender of Christian pacifism, yet both advocates of just war doctrine and peacekeepers will find their views strengthened by Brimlow's incisive and fair-minded approach. This work can be incorporated into undergraduate, graduate, and seminary courses dealing with Christian ethics and discipleship. It can also be used in adult study groups.

"This book is an honest examination of the most important challenge to pacifism: Would it not be right to use violence to stop great evil, such as that unleashed on the world by Hitler? Brimlow's honesty in dealing with the commands of Jesus is refreshing, and he does not shrink from confronting the dilemma of being a pacifist in a 'supreme emergency' of demonic evil unleashed on society. His answers are profound in their simplicity and honesty because he does not shy away from admitting that although God triumphs in the end, sometimes in this world evil triumphs over good in the here and now. He knows that nothing closes that gap but faith."--Craig A. Carter, author of The Politics of the Cross

"With clarity and respect for the best arguments justifying violence, from Augustine and Bonhoeffer to Michael Walzer and Jean Bethke Elshtain, Robert Brimlow responds to the challenges of radical evil (symbolized by Hitler). Brimlow provocatively engages the reader on three levels: a philosophical analysis and critique of just war reasoning; meditations on the gospel and Jesus that support willingness to die rather than participating in violence as the 'answer' to Hitler; and the spiritual practices of prayer and daily acts of mercy that habituate persons to being the people of God."--Duane K. Friesen, coeditor of At Peace and Unafraid: Public Order, Security, and the Wisdom of the Cross

"This is not an easy book to read, which is why Brimlow's book is so important. Brimlow does not have a sentimental bone in his body. His relentless analysis of just war and pacifism, therefore, will be painful for advocates of those positions. The hard clarity of his prose witnesses his refusal to report any easy answer to the question posed in the title. As a result, however, he has answered that question in the only honest way it can be answered."--Stanley Hauerwas, Duke Divinity School

"A searching examination of just war and pacifist approaches to war and violence that leads to advice on discipleship. It is a book I would make required reading for a course on the morality of war, even though I don't always agree."--Arthur F. Holmes, editor of War and Christian Ethics: Classic and Contemporary Readings on the Morality of War

"I expected, in this book, to see challenges issued to the just war theory. I was also not surprised to see probing questions--drawn creatively from Bonhoeffer and Orwell--posed to pacifists. However, I was not prepared to be so powerfully challenged by the gospel of Jesus Christ: to be reminded that the question takes on a very different resonance in the context of lives given to the spiritual and corporate works of mercy. What a wonderfully challenging book!"--Mark Thiessen Nation, author of John Howard Yoder: Mennonite Patience, Evangelical Witness, Catholic Convictions

"Those who critique pacifism usually ask one simple question: what about Hitler? Brimlow . . . grapples with that question as he reviews the philosophy and implementation of just war theories. . . . Brimlow's treatise is carefully argued in academic fashion, even as he admits to personal difficulties living out the gospel as he understands it. The result is a lucid and thoughtful analysis that doesn't gloss over or minimize the outrageous demands of the Gospels."--Publishers Weekly

"In each chapter [Brimlow] begins with a searching meditation on a scripture passage, in lectio divino fashion, and recounts a personal story before turning to theological arguments with the laser clarity of his philosophical training. The result is an unusual mix of devotional piety, self-revelation and rigorous logic."--John D. Roth, Christian Century

"In this deeply personal and searching book, Brimlow . . . confronts some of the standard moral arguments for using force. . . . This well-written book is recommended for those addressing violence in personal life."--Mark R. Amstutz, Religious Studies Review

"Brimlow boldly responds to the most difficult objection to pacifist philosophy, i.e., that the presence of an objectified evil, such as that embodied by Hitler in the Holocaust and the Second World War, necessitates violent response. . . . Each chapter is accompanied by a meditation, written as a prayer centered around a passage of scripture, and a prologue which conveys an anecdote or reflection, typically from Brimlow's personal experience with violence. . . . The reader may . . . appreciate the result, namely, a parallel view of Brimlow's rational, emotional, and personal struggle to understand Christ's teaching. These alternate perspectives bring an aspect of humanity and humility into the text. . . . Brimlow has challenged the reader, even in his choice of title, to wrestle with the call of Christ to be peacemakers."--Clinton Campbell, TheOtherJournal.com

"What makes this text interesting . . . [is] Brimlow's discussion of the emotional side of following a non-violent lifestyle. Rather than defending non-violence with abstract concepts, Brimlow explores the difficult ethical choices confronting pacifists by relating his own struggles and ultimately by addressing the ultimate challenge to pacifism in the 20th century, namely Hitler himself. Brimlow reveals his own struggles through a series of self-revelations. He is so transparent about his thoughts that readers will think they are reading his devotional diary. . . . Whether readers agree or not with the author's conclusions, they will be as touched by his forthrightness and call to discipleship as I was. . . . The clarity and simplicity of Brimlow's writing combine to make this book an excellent addition to the required readings of a political ethics course. The author's honesty and passion to follow Christ will engage students at both an intellectual and emotional level; a combination that should encourage lively and thoughtful class discussion on this important and controversial topic."--Stephen Vantassel, Evangelical Review of Society and Politics

"[Readers] will not be able to dismiss [Brimlow's] penetrating logic, insightful analysis, and moral seriousness. . . . This book provides a compelling, if controversial, answer to the question of what Christians should do in the face of overwhelming and even genocidal evil. Along the way, it provides critiques of both just war theory and pacifism, and represents an important contribution to ongoing conversations about appropriate religious responses to violence and nonviolence. . . . The author wrestles intensely with scriptural passages and their meanings. . . . This is a thought-provoking and well-written book with a compelling, if challenging and soul-searching, argument. It will provide an enjoyable and illuminating read for anyone, from undergraduates to seasoned scholars, seeking to explore Christian approaches to violence and nonviolence."--Patrick Q. Mason, Peace & Change