Ecclesiastes through the Lens of Contemporary Film 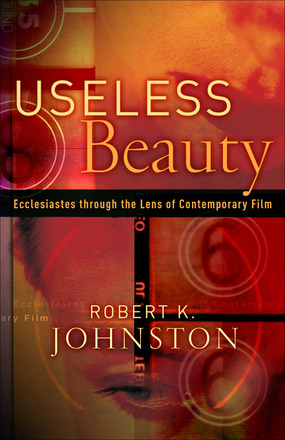 How should Christians relate to the difficult and contradictory messages of modern movies? In Useless Beauty, Robert K. Johnston presents the bold position that films can be our "eyeglasses and hearing aids" in understanding the Book of Ecclesiastes. Taking up movies such as American Beauty, Magnolia, and About Schmidt, he addresses such biblical issues as life and death, chance and choice, loneliness and connection, and God's presence and absence to deepen our understanding of life's beauty amid its confusion and pain.

Christian filmgoers, pastors, and youth leaders will find Johnston's book a valuable source of insight into the relationship between Christianity and popular culture.

"A wise old adage of faith states, 'Read the newspaper in one hand and the Bible in the other.' The slogan is an invitation to notice the complex engagement of faith and culture. In Useless Beauty, Johnston takes up the interface of faith and culture with specificity and immediacy. His discussion permits an instructive dialogue, whereby we read Ecclesiastes differently, and we read contemporary film with fresh eyes of faith. Neither the text nor the films can be easily dismissed as 'absurd.' Both are thickened, and we are driven deeper in our self-discernment by the process. Johnston's alertness and urbaneness constitute a model for faith that is not simplistic and a model for culture that is not thin or transparent."--Walter Brueggemann, Columbia Theological Seminary

"Some of the most helpful contemporary interpretation of Scripture comes from those who look at the text with eyes other than those of the biblical scholar. Johnston's interpretation of Ecclesiastes through the lens of film is an excellent example. The text comes to life in the interaction he creates with the narratives of major contemporary movies. They in turn are better understood by the careful theological interpretation Johnston gives them through the lens of Ecclesiastes. The possibilities for preaching and teaching are obvious."--Patrick D. Miller, Princeton Theological Seminary

"In Useless Beauty, Johnston weaves the wisdom of Ecclesiastes into contemporary narrative films and vice versa, merging theology and film into a smart and insightful dialogue to enhance understanding of both."--William D. Romanowski, professor of communication arts and sciences, Calvin College; author of Eyes Wide Open

"Johnston reads Ecclesiastes with a rich, postmodern hermeneutic--not the more common simplistic, linear, moralistic, or formulaic approach that threatens to drown Bible readers in the shallows. His reading has great value for people seeking new ways to find meaning in Scripture. Personally, it helped me weave my life experience with my viewing of film and my reading of the Bible, and it left me feeling alive and energized."--Brian McLaren, pastor (crcc.org) and author (anewkindofchristian.com)

"This book is a well-informed and sensitive example of how, in our uncertain and contradictory times, to engage film and Scripture without denying the integrity of either. It is highly recommended."--Rikk E. Watts, associate professor of New Testament, Regent College

"Invites us to consider connections between biblical wisdom, literature, and film. In particular, [Johnston] compares Ecclesiastes with films such as American Beauty, Magnolia, About Schmidt, and Signs. 'Useless beauty' refers to the paradox described in Ecclesiastes (and in many of the selected films) of beauty in the midst of a life filled with vanity, futility, and absurdity. Although the title promotes Ecclesiastes through the lens of film, it is really a treatment of film through the lens of Ecclesiastes, as Johnston intersperses key biblical passages in italics next to his rendition of film plots and characters showing us the dynamic analogies. Johnston's hope is that this will create a 'two-way dialogue' that starts with the film but moves back and forth between film and scripture. Narrowing in on Ecclesiastes--a book embraced by many different religious traditions--exposes Johnston to a wide audience, one that includes Christians, Jews, Muslims, and even New Age hybrids. That's good for everyone, because Johnston's forte is helping us think more deeply about how God is revealed in popular culture, so that our notion of God is expanded even beyond our traditional understandings."--Publishers Weekly (starred review)

"Notable and well worth reading. . . . Johnston's sensitive and insightful discussion of films is the chief strength of this book. One need not have seen all the movies he treats in order to benefit from the volume, although the book does provide a compelling incentive to rent and re-view films such as American Beauty, Monster's Ball, About Schmidt, Signs, and many more. In each instance, Johnston's descriptions reveal important aspects of the filmmaker's art and message before bringing them into alignment with the insights of Ecclesiastes. A genuine side-benefit of the book is that it helps the reader to become a more sensitive and informed viewer of the film genre even as Johnston prompts the reader to consider, in new ways, the interface of culture and faith. . . . This volume will be a useful tool in the library of pastors and youth workers. . . . Johnston's sensitive interpretation of movies serves to equip pastors and others who seek to find ways that movies might converse with the biblical witness. . . . Preachers seeking some pertinent connection with the lives of their parishioners in the Sunday sermon are likely to find an inspirational model in Johnston's approach. And that is no small accomplishment!"--Walter C. Bouzard, Word and World

"Each chapter begins with a careful exposition of a film, then returns to the biblical book to consider how the film contributes to the proposed reading. . . . Johnston often enriches his discussion by examining the filmmakers' other works, as well as material from interviews and essays. . . . This is a creative, accessible work. The author is to be commended for his close viewing of these contemporary films, his careful reading of the biblical text, and the fruitful conversation he facilitates between the two. . . . Perhaps this is something of a harbinger of future works, from Johnston and others, which will continue and expand this practice of interdisciplinary conversation."--Jason A. Fout, Reviews in Religion and Theology

"Ecclesiastes is a peculiarly postmodern piece in the OT and the dialogue Johnston engenders between this book and a number of films which tackle themes of particular interest in our postmodern society provides some fruitful avenues for a fresh engagement with the words of the ancient Preacher [Qohelet]."--Doug Ingram, Themelios

"Informative and perceptive. . . . Johnston appends a brief history of the interpretation of Qoheleth, a fascinating critique of Christian film criticism, and a defense of his own mode of doing research. If by such a study Johnston can reach modern readers and lure them into a close reading of Qoheleth, his attention to cinema will have paid dividends."--James L. Crenshaw, Religious Studies Review

"Thank you, Robert K. Johnston, for if we ignore the visible absence of God, will we recognize the invisible presence of God-in-the-ordinary, Christ in the common? . . . I challenge you to read these two books, Useless Beauty and Ecclesiastes from the wisdom tradition of our Scripture and ponder what they say to you."--Church Educator

"Ecclesiastes is a peculiarly postmodern piece in the Old Testament and the dialogue Johnston engenders between this book and a number of films which tackle themes of particular interest in our postmodern society provides some fruitful avenues for a fresh engagement with the words of the ancient Preacher. . . . If the reader wishes to engage with the Preacher's words in new ways which resonate with life as we know it in a postmodern age, then Johnston's book will open up some exciting and refreshing possibilities. In particular the reader will be encouraged to grasp as God's gift the fragile beauty which accompanies life in this enigmatic, fraught and perhaps at times even absurd world in which we find ourselves."--Doug Ingram, Evangelical Quarterly

"Johnston recalls the major issues of [contemporary] movies and then confronts them with telling passages from Qoheleth. This kind of 'intertextuality' generates new insight into both the movies and the biblical text. Hence Johnston's study shows what a reader/viewer-oriented criticism might contribute to an understanding of Ecclesiastes."--Old Testament Abstracts

"One of the most important such books of our generation. . . . It stands as a creative and vital illumination of the biblical text. And yet, it is essentially a collection of exceptionally thoughtful film reviews, focusing on the darker (prophetic?) stories which offer critique to the American Dream and the weightlessness of late modern culture. From films such as Magnolia, America Beauty, and About Schmidt to important directors like Akira Kurosawa, Woody Allen, or M. Night Shyamalan, the wide-eyed Dr. Johnston knows contemporary film and filmmakers and brings his interesting insights into dialogue with Ecclesiastes."--Byron Borger, heartsandmindsbooks.com