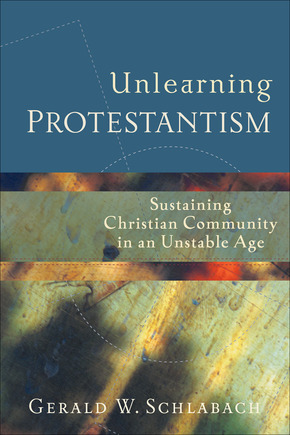 This insightful book addresses the "Protestant dilemma" in ecclesiology: how to build lasting Christian community in a world of individualism and transience. Gerald Schlabach, a former Mennonite who is now Catholic, seeks not to encourage readers to abandon Protestant churches but to unlearn lessons that are no longer productive. He explains that what may have been virtues in the early years of the Protestant Reformation have now become vices that corrode community life. For example, Luther's courage to stand on conscience has become, in our individualistic age, an excuse to avoid the hard work of living together in community.

Unlearning Protestantism encourages readers to relearn certain virtues that all Christian communities need to sustain their communal lives. Schlabach offers a vision for the right and faithful roles of authority, stability, and loyal dissent in Christian communal life. He tries to make sense of the yearning for a new kind of catholicity that Christians of multiple denominations are demonstrating through liturgical renewal, the recovery of ancient Christian spiritual practices, and other alliances and crossovers.

This book will be useful in theology and ecclesiology courses. It deals with issues that transcend denominations and will appeal to all readers, both Catholic and Protestant, who are interested in sustaining Christian tradition and community over time.

"In this fascinating, scintillating book, Gerald Schlabach shows how absolutely crucial the practice of stability and the virtue of fidelity are for sustaining Christian communities today. If the inevitable tensions, conflicts, and disagreements that strain communal life are not to destroy it, Christians must learn how to stay together as they build communities that more faithfully witness Christ. Perhaps most important is Schlabach's claim that loyal dissent, far from being a threat to a community and its traditions, is rooted in a community's traditions and aims to enrich them. Loyal dissent, as an expression of stability and faithfulness, is precisely what a pilgrim people needs as it journeys together to God. Thoughtful, insightful, and refreshingly challenging, Schlabach's Unlearning Protestantism is a gift for Christians whose impatience with imperfect communities tempts them to forget that God is present in the very ordinary--and often trying--circumstances of our lives."--Paul J. Wadell, professor of religious studies, St. Norbert College

"The question before Christians today is not whether the Reformation is over but, as Gerald Schlabach frames it so well, whether Protestants will be able to sustain faithful Christian communities over time apart from a serious engagement with the Catholic tradition. Written in an accessible and winsome style, this book needs to be read by every scholar and layperson interested in the unity and witness of the church in a world that for the most part no longer even pays lip service to the God Christians worship. In particular, Schlabach's treatment of the relationship between stability and dissent is nothing short of masterful."--Barry Harvey, professor of theology, Honors College, Baylor University

"Many of us Protestants are not Catholic enough to know what we are protesting. This book is a unique celebration of the stability of Catholicism while also recognizing that the church needs a revolution every few hundred years. A monumental step toward the unity Jesus dreamed of as he prayed that the church would be one as God is one."--Shane Claiborne, author and activist, www.thesimpleway.org

"Well written and perspicaciously framed, Unlearning Protestantism represents a stimulating contribution to ecumenical dialogue. Gerald Schlabach lifts up the practice of stability and the virtue of fidelity for Christian ecclesial communities with characteristic hospitality and humility. His own story of becoming a Mennonite Catholic, woven gracefully within his thoughtful analysis of the broader Christian narrative, provides a hopeful model for the sort of virtuous empathy he recommends to Christians as they plumb the depths of their own traditions while engaging in dialogue across ecclesial traditions."--Margaret Pfeil, assistant professor of theology, University of Notre Dame

"There is no shortage of books these days about the future of the church, and most of them are unfortunately shallow if not unintelligent. By contrast, Unlearning Protestantism is uncommonly rich and wonderfully wise. Not many scholars have the ecumenical range and historical depth that Gerald Schlabach brings to ecclesiological questions. And even those who do would be tempted to bypass the issues that he has engaged in this book. But then, not many scholars have invested the time to build bridges between ecclesial traditions like Schlabach has for the past two decades. This book displays practical wisdom about why and how 'staying put' is an important virtue for Christians to practice in order to sustain Christian communities. Schlabach invites readers to unlearn habits of thought that we have long associated with Protestant conceptions of the church. We are also invited to embrace a vision of Christian renewal that is driven by the power of the Holy Spirit at work in human communities across time and space. I highly recommend to anyone who cares about the project of Christian renewal in a globalized world."--Michael G. Cartwright, Dean for Ecumenical & Interfaith Programs, University of Indianapolis

"A Catholic and former Mennonite, Schlabach makes clear from the outset that his book is not about persuading Protestants to convert to Catholicism. But [he] proposes that Protestants have something important to learn from Catholics: the practice of stability that keeps them together despite their differences. . . . He calls on all Christians to nurture virtues and practices that make it possible for them to pursue reform while sustaining their communal lives. This thoughtful and groundbreaking work will speak to Protestants and Catholics alike."--Publishers Weekly (starred review)

"This is a very calm and balanced book. . . . Schlabach has done a great deal of homework on this whole subject, which makes his book a treasure trove of interesting and insightful studies of many authors. . . . Schlabach has written an excellent, thought-provoking book. It is by far the most profound study of stability that I have ever seen. By all means buy this book, read it, and then put it in your library."--Terrence G. Kardong, OSB, American Benedictine Review

"Unlearning Protestantism is a sustained argument that the 'Protestant principle' itself needs tradition. Protest and dissent are meaningless apart from communion, and stability is what holds loyalty and protest together. . . . I work every day with Protestant students and colleagues who are 'yearning for some new kind of catholicity,' and Schlabach's inspiring stories of 'loyal dissent' rang true to me. . . . Schlabach's Mennonite Catholic perspective highlights a distinguishing characteristic of the Catholic Church that many Catholics are too close to notice."--William L. Portier, Commonweal

"[A] provocative work. . . . By combining autobiography (now known as memoir) with the fruit of academic endeavors, the author crafts a nuanced book that is both personal and scholarly. . . . He interweaves experience and study with a readable result. Appropriate chapter titles with subheads that clarify thought progression contribute to reader comprehension. Accessible notes, thorough bibliography, and adequate index further enhance the book's usefulness for continuing reference in a personal or institutional library."--Willard E. Roth, Missiology

"Once in a while a book appears that raises new questions and hazards new answers for a new time. Gerald Schlabach's book is of that kind. . . . All who are concerned about today's church may take hope for the future from this arresting personal reflection."--Walter Klaassen, Mennonite Quarterly Review

"[The book] explores a perennial challenge to unity faced by all Christians, a shared opportunity for Catholics and Protestants to learn from one another about the virtue of fidelity, and a hope for unity grounded in mutual growth in closeness to Christ. At every turn, the gritty and messy--yet by the grace of God hopeful--possibility of practicing stability during hard times causes Schlabach to steer clear of all-or-nothing solutions to the scandal of Christian disunity. He prods readers toward the kind of stability that prepares Christians, when conscience demands, to practice 'loyal dissent' borne out of love for Christ and His Church. . . . Much of the book's merit lies in the gripping narratives of difficult ecclesial episodes and personal sacrifices. Thereby, Schlabach's call to sustain Christian community becomes compelling rather than abstract and ideal. . . . The book offers a first step toward the 'somewhere' at which we must start for the sake of Christian community."--Douglas V. Henry, Journal of Interdisciplinary Studies