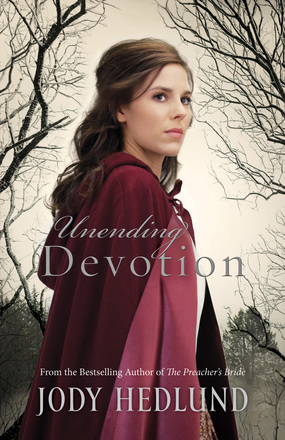 Michigan, 1883
In Her Darkest Hours, Is He the Man She Needs?


Lily Young longs to find her lost sister or will die trying. Heedless of any danger, she searches logging camps and towns, posing as a photographer's assistant. And then she arrives in Harrison, Michigan--and the sights of Connell McCormick.


Connell is determined to increase the fortune of his lumber-baron father and figures as long as he's living an upright life, that's what matters. But when Lily arrives in town she upends his world, forcing him to confront the truth that dangerous men have gained too much power while good men turn a blind eye.

Vexing but persuasive, Lily soon secures Connell's help, drawing them ever closer to each other. Will standing for what's right cost them both everything?

"Unending Devotion is a lovely and real representation of sisterly love and how even that can't compare to the love God has for us."

"Hedlund's (The Preacher's Bride) latest historical romance is a meaty tale of life amid the debauchery of the lumber camps of 1880s Michigan... Hedlund intricately balances romance and drama, asking where the line between good and evil lies and exploring the dangers that erupt when that line becomes blurred. Hedlund's tale is exciting and unpredictable to the very end."