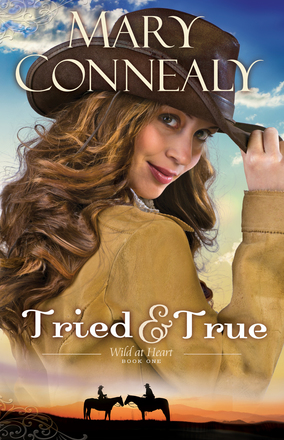 Saddle up for a wildly fun ride with the Wilde sisters!

Kylie Wilde is the youngest sister--and the most civilized. Her older sisters might be happy dressing in trousers and posing as men, but Kylie has grown her hair long and wears skirts every chance she gets. It's a risk--they are homesteading using the special exemptions they earned serving in the Civil War as "boys"--but Kylie plans to make the most of the years before she can sell her property and return to the luxuries of life back East.

Local land agent Aaron Masterson is fascinated with Kylie from the moment her long hair falls from her cap. But now that he knows her secret, can he in good conscience defraud the U.S. government? And when someone tries to force Kylie off her land, does he have any hope of convincing her that marrying him and settling on the frontier is the better option for her future?

Another great laugh-out-loud historical romance with memorable characters who have charm, style, grace, and a bit of mischief.

RT Book Reviews on In Too Deep

Connealy's style is fast-paced and spritely and sure to keep drawing fans.

With her trademark humor, Connealy weaves a delightful tale that is sure to please her fans and win new readers.

Library Journal on Over the Edge

Connealy spins a Civil War-era romance with book one of the Wild at Heart series. Her feisty female characters win our hearts.

Connealy's view of the Idaho Territory in 1866 is a surprising delight in this inaugural novel of her Wild at Heart romance series . . . The light tale is spiced with both humor and a glimpse into the darker side of the great land rush.