One Woman, a Supernatural God and a Mission to the Toughest Part of India 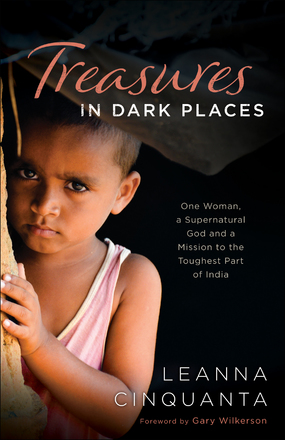 Skinny-armed toddlers with wide, hungry eyes and bloated bellies watched us beneath thatched eaves, a black string around their waists and heavy mascara smeared around their eyes to fend off the demons. Their rescue and freedom were why I had come. But now that I was here, what was I, one small woman, to do in the face of overwhelming poverty and evil?

From the beautiful Himalayas to the mighty Ganges River of northern India, a soul-stealing spiritual darkness ravages the land. More than 35 million children are orphaned and destitute. Over 25,000 girls are abducted annually for sex trafficking. Dictators and loan sharks force millions into physical slavery while witch doctors and centuries old idol worship imprison even more in spiritual bondage.

God's heart breaks for them. And in His great mercy, He called one unlikely young woman to shine His light in this dark place.

With warmth and disarming honesty, Leanna Cinquanta shares the rigors, heartaches and miraculous experiences of living hand-in-hand with God, invading the blackness and liberating His treasures. You will be amazed and encouraged at how the supernatural love of Jesus can transform not just one heart, but the hearts of a nation.

"I remember Leanna as a wide-eyed 23-year-old who came to YWAM Denver eager to find her place in God's Kingdom. From the very start she displayed a wholehearted passion to help others. I never imagined, however, that she would end up doing a fraction of the amazing things she has. Her life is a testament to this fact: God will use anyone whose life is completely surrendered to Him. Treasures in Dark Places is the powerful account of a young woman willing to leave the comfort and security of a promising career to serve God wherever He would lead--and He led her to one of the most difficult places on earth. You won't be able to put this book down until you've read the very last page. It is engaging and inspiring, but what is most astounding is that the stories you're about to read are all true."

"Rarely does a literary work juxtapose poignant narrative and powerful mission in such a balanced manner. This book is a must-read for anyone with God's heart for the most vulnerable in the most difficult places. Leanna weaves her tome masterfully in a manner that will leave the reader changed forever."

"Do you ever get tired of mundane, lifeless 'Churchianity' and long for the God of the Bible to burst out of man-made boxes and into action? If so, wait no longer. Leanna Cinquanta has experienced the compassion and power of God at work today and has captured some of those stunning stories in her book. Your heart will burn and your faith will be activated as she takes you on her journey of mystery and revelation, trial and triumph."

"Dr. Leanna Cinquanta is a spiritual daughter of mine, and I could not be more excited about what God is doing through her to spread the Gospel and rescue the broken in the nation of India. There are few more qualified than Leanna to write a book about treading fearlessly into the forgotten and dark places of the earth to reveal the light and hope of Jesus and pull out the gold in those trapped in a hopeless existence.
"Treasures in Dark Places is compelling, heart-wrenching and beautifully written. Leanna reminds us that the need in the earth may be great, but our God is so much greater. By reading Leanna's call into ministry, her commissioning into the harvest field and ultimately her inspiring impact and transformative work in the nation of India, your faith will be awakened that you, too, are able to pierce darkness in the face of human tragedy--as 1 John 5:4 assures us, 'Everyone born of God overcomes the world.'"

"A remarkably crafted tool for the laborer seeking to plant churches among the unreached. This is an unforgettable hands-on account of a highly motivated pioneer opening new territory. Leanna learned to hear the voice of God, understood His heart for a desperate people group and assembled a team of local workers to get the job done. They became an 'emergency response team' that released victims trapped by the enemy's earthquake, healed their wounds and set them on the pathway to the clearing in which God's love is the total source of light. A gripping story!"

"In this masterfully painted account of sacrifice and triumph, your fears will be dispelled and your faith rocketed to new heights. Called to one of the darkest parts of the world--known as the 'graveyard of Christianity'--Leanna Cinquanta went to northern India alone, not knowing if she would ever return. Not only did she thrive, but Leanna raised up key indigenous leaders, catalyzing a massive movement that leads tens of thousands of people to Christ every year. Today Leanna's team oversees 23,000 home-based churches, 160 children's education centers, several schools and an aggressive ministry to eradicate human trafficking in the most dangerous part of the world. Treasures in Dark Places delivers a jolt of Holy Spirit power, vision and purpose. Leanna will take you into her world where 'impossible' does not exist and where a God of miracles enables even the least likely person to change the world."

Wesley Campbell, director, Be a Hero

"For a decade I have known and worked with Leanna and many of the dear believers we both count as treasures. This is book-of-Acts territory and proof that the Gospel is the greatest force on earth. I commend to you her adventure and pray you will share in it."

"Leanna is a practitioner, not just a theorist. When I met her in India, she went by the title Sis, but she was raising up indigenous leaders to empower the people and rescue children. The Lord has given her eyes to see what others don't see yet--treasures in everyone!"

"Brilliant. Simply brilliant! This extraordinary, true story of how God has used the life of a woman totally surrendered to Him to help change a nation inspires and challenges us all to make our lives count for the Kingdom."

"I met Leanna and heard her story for the first time in 1999. The anointing of the Holy Spirit was so strong when she was talking that all I could do was weep. Leanna is walking in the calling of God, and Treasures in Dark Places will release a newness and a higher purpose into your life. May all who read this pray for and support her world-changing initiatives."

"Kudos for your writing and for your amazing ministry in India. It's a privilege to work with you and help get your message out. You have a fabulous gift for storytelling. This book is absolutely riveting!"