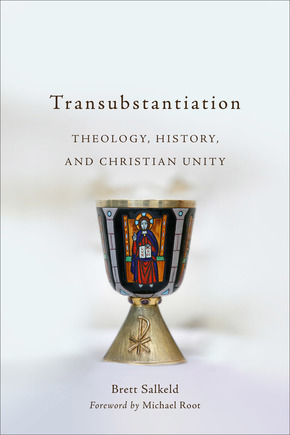 This thoroughgoing study examines the doctrine of transubstantiation from historical, theological, and ecumenical vantage points. Brett Salkeld explores eucharistic presence in the theologies of Aquinas, Luther, and Calvin, showing that Christians might have more in common on this topic than they have typically been led to believe. As Salkeld corrects false understandings of the theology of transubstantiation, he shows that Luther and Calvin were much closer to the medieval Catholic tradition than is often acknowledged.

"This is an important book on a sensitive topic. It offers a fresh approach to a seemingly intractable problem in ecumenical relations and is well researched and judicious in its judgments. It will be a significant new resource for ecumenical dialogue."

John Cavadini, professor of theology and director of the McGrath Institute for Church Life, University of Notre Dame

"It is a great scandal that the Eucharist, the sacrament of Christian unity, has been the occasion for fracture and division in the body of Christ. At the heart of many of the controversies has been the Catholic doctrine of transubstantiation. Brett Salkeld's book is the best ecumenical study of this topic to appear in years. He asks Catholics to consider what the Church actually teaches on the subject, and invites Protestants to wonder if their own eucharistic doctrines aren't in fact closer to transubstantiation than they've been led to believe. Agree with Salkeld or not, his book is a model of charitable and intelligent ecumenical theology."

"I learned so much from this book. Salkeld boldly touches the third rail of ecumenism: the doctrine of transubstantiation, the very mention of which is bound to raise the hackles of both Protestants and (increasingly since Vatican II) Catholics. He defends the startling suggestion that Lutherans, Reformed, and Catholics can find in a proper understanding of 'transubstantiation' the position on real presence that each yearns to uphold. As he shows, the meaning of the term had become obscured by the sixteenth century, just as it largely has today. Salkeld writes with love and admiration for his fellow Christians. May this wonderful book enrich Christian unity as we approach the mysteries of the Lord's table."

"In December chill the laborer hastens home at dusk to the hearth. So Brett Salkeld's work in this time of 'ecumenical winter' warms the reader with the glow of ecumenically intentional dogmatics. If Protestants still wish to douse the fire with a bucket of cold water to the effect that Rome has never heard the witness of the Reformation, Salkeld's careful and sympathetic reading of sixteenth-century eucharistic theology, like Elijah's fire on Mount Carmel, vaporizes the objection."

"Salkeld has produced an extraordinary book. . . . Salkeld argues, successfully to my mind, that transubstantiation, when properly understood, secures everything that Luther and Calvin wanted to secure in their own respective theologies of the eucharist. He goes on to suggest that transubstantiation might fruitfully mediate between Luther's and Calvin's positions. . . . Salkeld sees in transubstantiation not just a stubborn point of contention, but a possible point of ecumenical convergence. His book is an appeal for an ecumenical Thomism that is sensitive, well-researched, and compellingly presented. It will reward careful reading by advanced undergraduates, graduate students, and ecumenists, while being accessible enough for the pastors and priests who celebrate and teach the holy mysteries. . . . It serves as an excellent overview and bibliographic resource, all while modelling careful, charitable ecumenical engagement."

"[This book] is remarkable for its ambitious and intriguing ecumenical proposals. Salkeld argues that, when understood according to Thomas's articulation of it, the Catholic doctrine of transubstantiation should prove largely acceptable to traditional Lutheran and Reformed Christians. Not only that--Salkeld even suggests ways in which transubstantiation might mediate differences between the two Protestant traditions!"

"In this lucid study, the Roman Catholic lay theologian Brett Salkeld presents three major theologies of eucharistic conversion: those of Thomas Aquinas, Martin Luther, and John Calvin. Through admirably close attention to primary texts and exacting critical analysis, he distils complex ideas and traces shifting terminology, boldly building a case that the positions of these theologians, to which the Roman Catholic, Lutheran, and Reformed Churches respectively make frequent reference, are reconcilable. . . . Salkeld shows that if Christian churches were to spend more time relearning their theologies of conversion by returning to their sources, the Eucharist could become a new locus of ecumenical convergence."

"This book is most valuable for its careful, ecumenically sensitive treatment of Thomas's theory of transubstantiation and a thoughtful appraisal of the core issues important to Luther and Calvin. It is suitable for undergraduates or lay Christians, and it would be especially helpful for Catholics, Lutherans, and Calvinists searching for a clearer understanding of the traditional Catholic understanding of eucharistic presence."

"Despite ecumenical efforts in recent decades to seek agreement on eucharistic theology, [transubstantiation] is often consciously avoided in dialogues and documents. Brett Salkeld . . . argues persuasively that this lacuna is a serious problem, which in fact has kept such ecumenical work from progressing. . . . Salkeld writes as an experienced ecumenist concerned with getting to the root issues of historic disagreements between Catholics and Protestants. . . . Transubstantiation is an excellent contribution to ecumenical discussions between Catholics and Protestants on the Eucharist. It is well researched and clearly written, and thus a worthwhile read for anyone interested in the topic."

"The search to remove obstacles to Christian unity is one of the primary objectives Salkeld had in mind in writing this book. For many, if not most Protestants, this word has been 'an identity-marker' of their inherited opposition to Roman Catholicism; and therefore, a fundamental obstacle in the search for Christian unity. . . . . Salkeld therefore sets out to examine the history of the idea, what it was originally intended to mean, and the implications of the fact that not only Protestants, but also Catholics, have often misunderstood the meaning of transubstantiation. . . . One of the best single-volume studies available."

"Salkeld's stated purpose is to answer the following question posed by Walter Cardinal Kasper, president emeritus of the Pontifical Council for Promoting Christian Unity: 'Can consensus be found about the meaning of the term transubstantiation repudiated by all the reformers, or does the rejection of this term demonstrate that a deeper difference still remains in the understanding of the real presence of the Lord?' Salkeld argues that consensus can be found and sets out to achieve that goal. Transubstantiation, properly understood, can serve as a stepping-stone rather than a stumbling block not only to closer Catholic-Protestant understanding, but also closer intra-Protestant understanding of eucharistic real presence. . . . Salkeld's book deserves a place on one's bookshelf."