This Is My Body

The Presence of Christ in Reformation Thought 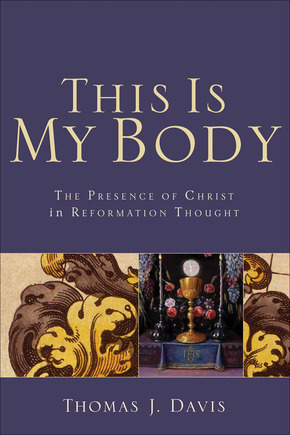 "Davis continues to demonstrate why he is one of the leading interpreters of Calvin's theology of the Eucharist working today. This is a clear and accessible collection of essays that should be of interest to a wide audience."--Randall C. Zachman, University of Notre Dame

Surveys of the Reformation era typically provide readers with a broadly framed discussion of the Lord's Supper and the respective positions taken by the major figures involved--Martin Luther, John Calvin, and Ulrich Zwingli--with regard to Christ's presence in the bread and wine. These more narrowly focused essays by Thomas Davis, however, bring a helpful sense of context to the discussion with an examination of important details that are often overlooked.

Davis devotes several chapters to Luther and to Calvin, examining the development of their eucharistic theology and its relation to their broader understanding of the presence of Christ in the community of faith. His study is particularly insightful with regard to the Reformers' use of language and their concept of how "signs" work. The final two chapters expand his study to include other figures of the Reformation era.

Scholars interested in historical theology will find in these well-researched essays a wealth of material to consider. General readers of church history will also find Davis's work accessible and a useful guide to the development of the Reformers' understanding of the presence of Christ in the Lord's Supper and the church.

"This Is My Body offers fresh insight into the eucharistic theology of the sixteenth century. Its essays highlight the centrality of Christ's presence for the reformers while exploring their different understandings of that presence. Professor Davis approaches Calvin's understanding of the Lord's Supper from a variety of angles, paying careful attention to the Genevan reformer's language. He draws on Calvin's sermons, commentaries, and treatises, as well as on successive editions of the Institutes, to illustrate aspects of Calvin's thought that have often been overlooked. Church historians, theologians, and pastors will all find something of value in this book."--Amy Nelson Burnett, professor of history, University of Nebraska-Lincoln

"The topic of this book has often been dealt with and yet Davis comes with new insights and a balanced position to convey the sacramental issue of the sixteenth century in a very accessible style. Dr. Davis has with this book done a great service to both the scholarly world and the church."--Herman J. Selderhuis, director of the Institute for Reformation Research, Apeldoorn

"Ever since Luther wrote 'This is my body' on the table at Marburg, theologians and historians of theology have been trying to trace the various levels of signification in the deceptively simple affirmation that Christ is present in the Eucharist. Thomas Davis's new work offers some of the most insightful and imaginative ways into the set of problems while never pretending to 'solve' the paradoxes inherent in this central Christian affirmation."--R. Ward Holder, associate professor of theology, Saint Anselm College

"Thomas J. Davis continues to demonstrate why he is one of the leading interpreters of Calvin's theology of the Eucharist working today. Davis does a wonderful job of setting Calvin's understanding of the Supper in the context of Luther's teaching on the subject, showing that both Luther and Calvin focus the power and efficacy of the Supper in the Word of God to which it is adjoined. By so doing, Davis opens a promising avenue of ecumenical understanding. Davis is especially to be commended for focusing our attention on the centrality of the life-giving flesh of Christ in Calvin's understanding of salvation. Davis convincingly argues that if one looks at Calvin's understanding of the body from the viewpoint of communion with Christ's body in the Eucharist, then the body must be seen as a wonderful gift and instrument of God, through which God saves God's people. Our experience of union with the body of Christ is therefore the center of Calvin's understanding of Christian existence. This is a clear and accessible collection of essays that should be of interest to a wide audience."--Randall C. Zachman, associate professor of Reformation studies, University of Notre Dame

"Davis offers a lucid and thoroughly engaging collection of essays around the treatment of Christ's presence in the eucharistic discourse of Calvin, Luther and, much less prominently, Zwingli. The final chapter is a fascinating sketch for a grand cultural narrative."--David Aers, Journal of Ecclesiastical History

"Baker Academic has recently performed an excellent service of collecting important and insightful academic articles by leading scholars and making them available to a wider audience. . . . This Is My Body, which gathers seven of Thomas Davis' previously published essays and adds three more, is no exception. Readers will find here learned studies of different aspects of the presence of God in Reformation thought. . . . This volume is clearly argued, informative, and often opens up fresh vistas and perspectives. A great resource, it could well be used in courses on the Reformation, Calvin or Eucharistic theology."--James R. A. Merrick, Theological Book Review

"This well-researched, yet accessible, essay collection offers a wealth of material, including some fresh perspectives, on the Eucharistic thought of our most influential 16th century reformers, and it will be found a valuable resource both to scholars of historical theology and to a more general readership who take an interest in this subject."--David E. Nyström, Theological Book Review

"Among those who wrote extensively on the doctrine of the Lord's Supper, or Eucharist, were the Reformers Martin Luther and John Calvin. The views of both men are sometimes oversimplified, but continuing research is helping us to gain a clearer understanding of the issues that united and divided the two. An important recent contribution is the book This Is My Body. . . . A fascinating and important book. . . . Davis offers insight on a number of issues rarely addressed by theologians and historians. . . . I enthusiastically recommend this book to all those who seek to understand the Reformed doctrine and to partake of the Supper with understanding."--Keith A. Mathison, Modern Reformation

"Davis is a thoughtful interpreter and critical guide to debates among Calvin scholars. Particularly noteworthy is the essay on Calvin's homiletic legacy, where Davis demonstrates the continued importance of Calvin's approach to making Christ present through preaching. The collection concludes with a thoughtful and creative rendering of the role of art in prefiguring a shift towards the literal signification of reality. . . . For pastors looking for a carefully nuanced articulation of Calvin's eucharistic theology, this work provides a helpful guide to the literature. Davis addresses specialized themes in ways that remain largely accessible and is able to show their importance to broader debates within theological scholarship of the Reformation."--Paul Galbreath, Interpretation

"Offer[s] penetrating insight into the theology of Christ's presence in the thought of Luther and Calvin. Much more than a reliable and nuanced interpretation of sixteenth century Eucharistic debates, this work highlights the often overlooked significance of Christ's bodily presence which undergirded the Reformers' more general soteriological understanding. . . . [This work's] signal achievement [is] the steady demonstration that participation in the very person of Jesus Christ was, for the Reformers, constitutive of salvation. It is to be hoped that Davis's work is regarded as more than a welcome contribution to the literature on the Eucharistic disputes of the sixteenth century. It exceeds that: it is also a window into the heart of Reformation soteriology, and will surely help many grasp what lay at the root of the question of Christ's presence in Reformation thought. Davis writes in a highly accessible style that is at once learned and pastoral without being either pedantic or simplistic. It is highly recommended for pastors, seminary or upper-level undergraduate students, and would be ideal for a class in Reformation thought."--Marcus Johnson, Trinity Journal

"Davis is already well respected for his work on Calvin's theology of the Eucharist. The ten chapters of this book . . . solidify his reputation. They do that by bringing Calvin's eucharistic theology into conversation with that of Luther and Zwingli, and by astutely contextualizing it not only in relation to Reformation thought in general, but also . . . in relation to the major artistic and scientific movements of the Renaissance and early modernity. . . . Coming to this book much more as a learner than as a critic, a Roman Catholic who has much to learn about the inner workings of Reformation thought, I can find little fault with it. For someone in my position it is, in a welcoming way, both informative and revelatory."--Robert J. Daly, SJ, Worship

"It is of great benefit . . . to have Davis's writings updated and brought together into one volume, where they may more readily complement each other. The great strength of this book is that it consistently, accessibly, and profoundly demonstrates that, for Luther and Calvin, the grace of God is mediated in several forms, including Scripture, preaching, and, of course, the Eucharist. However, for these two stalwarts of the Reformation, these various forms were but different modes for only one means of grace, the Word. . . . A truly excellent book."--John C. Clark, Calvin Theological Journal

"The work has much to commend it. First, Davis admirably handles one of the difficulties of a compilation work, namely, maintaining a sense of cohesion and flow of thought throughout. . . . Second, the author offers helpful methodological comments to guide scholars researching Calvin. . . . Finally, Davis ably uses his footnotes to add deeper scholarly insight while maintaining his thought flow in the main body. . . . Davis succeeds in offering a nuanced look at important aspects of Calvin's answers to how one knows, is saved by, and is united with Christ and relates these observations at key points to the thought of Luther and Zwingli. On the one hand, less seasoned readers in the area of Reformation studies will find that This Is My Body bears an accessible quality often absent in historical-theological works of its caliber. On the other hand, the copious footnoting of sources, interaction with original language works, and substantive content notes will aid scholars in delving more deeply into both primary and secondary literature. For the classroom setting, it is believed that this text, though accessible on other levels, would best serve graduate level or upper level undergraduate classes intersecting Reformation theology, especially that of Calvin."--Jonathan D. Watson, Southwestern Journal of Theology

"The controversies and conflicts over understandings of the Eucharist among the sixteenth-century reformers were bitter and divisive to a degree that can be mystifying from our contemporary point of view. But they were not trivial disagreements, and both in and (even more) beneath the arguments themselves very fundamental issues were at stake. . . . Davis's collection thoughtfully and convincingly explores the dimensions of these issues. . . . The elegance and profundity of Calvin's Eucharistic teaching is Davis's real concern, and this collection of essays represents a fine introduction to that topic--deeply scholarly but also elegantly accessible. . . . [The essays] show a deep sensitivity to the importance of Eucharistic worship in contemporary Protestantism."--R. Guy Erwin, Lutheran Quarterly

"Students of the Reformation will discover a rich and balanced treatment of Luther and Calvin's views of Christ's presence in the eucharist. . . . Davis writes as an expert in Calvin's eucharistic theology and exhibits a broad familiarity with the primary and secondary sources. . . . Davis' study is an important contribution to our understanding of the Reformation view of Christ's presence in the Lord's Supper. While there are many studies available on the topic, Davis' book is among the best. Not only does Davis provide a rich tour-de-force through Luther and Calvin's writings, but he also writes as a believer who has a keen interest in upholding a high view of Christ's presence in the sacramental practice of the church today."--Cornelis P. Venema, Mid-America Journal of Theology