Proposals in Soteriology and Anthropology 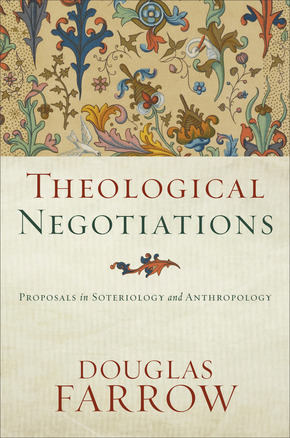 In Theological Negotiations, leading theologian Douglas Farrow tackles some of his discipline's perennial challenges, including the relation between nature and grace, philosophy and theology, autonomy and freedom, justification and sanctification, Gentile and Jew, and Christ's offering and ours.

Controversial issues from supersessionism to transubstantiation to the perfection and final end of man are approached in new and innovative ways, showing what constructive theology looks like when it is determined to think eschatologically about the relations in question.

The innovation, however, is never at the expense of biblical and creedal parameters or of patient engagement with the Christian tradition and its formative thinkers. Along the way, Farrow invites readers to renegotiate, or at least to rethink, some key Catholic/Protestant differences in soteriology as well as some ill-advised compromises with contemporary autonomy-based anthropology.

Contents
1. Theology and Philosophy: Recovering the Pax Thomistica
2. Thinking with Aquinas about Nature and Grace
3. Thinking with Luther about Justification and Sanctification
4. Satisfaction and Punishment: Reckoning with Anselm
5. Whose Offering? Doxological Pelagianism as an Ecumenical Problem
6. Transubstantiation: Sic transit mundus ad gloriam
7. Autonomy: Sic transit anima ad infernum
8. For the Jew First: Reaffirming the Pax Paulinica
9. The Gift of Fear: A Meditation on Hebrews
Indexes

"Farrow offers a panoramic view of the crisis points in theology, combined with unpicking a number of long-standing theological knots. He is at home in the worlds of both Protestant and Catholic theology, and he brings the two together with recommendations for an irenic concordat. Farrow's style is engaging; the essays could be appreciated for their literary qualities alone, quite apart from the theological insights they contain."

"This book will challenge Catholics and Protestants alike, for Farrow critically dissects some of the major issues that have divided and harassed them for five centuries. His knowledge of both traditions along with some of their major thinkers is impressive. For Farrow, being true to Scripture and right reason is essential to theology. Anyone serious about negotiating the philosophical and doctrinal complexities of ecumenical theology on those terms will find in Farrow a veteran envoy."

"All of the qualities we have come to expect of Farrow's thought--precision, incisiveness, and mastery--are on full display in this series of compelling essays. Writing with the verve and vigor that are his hallmarks, Farrow mines and unhesitatingly challenges the best of the theological tradition--Irenaeus, Anselm, Aquinas, Luther, and Barth--shedding fresh light on crucial and seemingly intractable issues. Importantly, he accomplishes this with ecumenical concerns always in sight. Theological Negotiations is systematic theology at its finest."

"Farrow's theology is robust and, like the gospel, ever ancient and yet ever new. It is also uncompromisingly biblical, catholic, and ecumenical. Farrow engages the dialectic of nature and grace as he surveys a wide range of fields: soteriology, sacraments, anthropology, and ecclesiology, among others. It is clear that what he calls the 'Pax Thomistica' is secure for the next generation and beyond. This is an important book."

"Farrow is profoundly Catholic, while ecumenically sensitive. He is deeply learned and utterly challenging in these essays on soteriology and anthropology. He refuses to accept easy answers for anything. He draws from the tradition to think through matters most rigorously and originally."

"An important and insightful book. . . . It is a rich volume, with reflections on topics such as nature and grace, justification, the atonement, and transubstantiation. A Roman Catholic, Farrow expounds his faith with clarity and power, and Protestants like myself who dissent from some of his conclusions will still find their own thinking sharpened as a result."

"Farrow's Theological Negotiations is a muscular, reciprocally enriching set of explorations of neuralgic loci of perennial theological concern. Articulating his proposals with characteristic verve and navigating alertly through the tradition and its resources, Farrow has produced an impressive and wide-ranging work of systematic theology that is also an exemplar of Catholic ecumenical engagement. . . . Farrow's latest is in some ways his most ambitious work, and in it his theological breadth is acutely displayed. . . . Even apart from its ecumenical purchase, Theological Negotiations is an impressive and promisingly constructive work of Catholic systematic theology. It exemplifies in its method the docile yet alert handling of scriptural, theological, and magisterial texts, and in its tone the toughness, charity, and urgency, that are Farrow's signatures. It will reward handsomely the careful and patient reader. It merits many of them."

"This book deserves a wide readership among Catholics and Protestants alike. I wholly commend it to such an audience as worthy of the critical engagement befitting the depth this work of highest quality."

"[Farrow] offers provocative explorations in theology. . . . Farrow is a high caliber Catholic theologian who has offered us various theological proposals written lucidly and argued well. He demonstrates a deep awareness of his own tradition, the Protestant tradition as expressed in the Reformers and Barth, and is additionally conversant with philosophical schools such as those of Kant and Descartes. For those interested in reading a seasoned Catholic theologian who does not avoid critical engagement with his own tradition as well as sympathetic interaction with those with whom he disagrees, this work is highly recommended."