Facing the Challenges of the New World 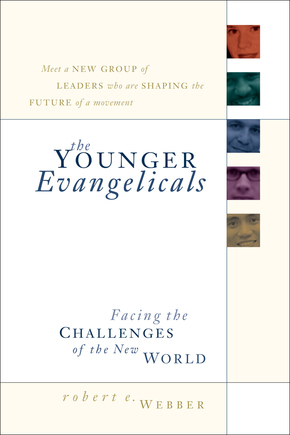 Over two decades ago, Richard Quebedeaux's classic The Young Evangelicals told the story of a new generation of believers. Now, in The Younger Evangelicals, Robert Webber explores how another generation of emerging leaders is bringing sweeping change and renewal to the twenty-first century evangelical church.

Webber explores the characteristics of these emerging leaders and provides an outlet for their stories. After giving an overview of twentieth century evangelicalism, he examines how the way "younger evangelicals" think about faith and church practice is radically different from their "traditional" (1950-1975) and "pragmatic" (1975-2000) predecessors.

Thought provoking and timely, The Younger Evangelicals is a landmark book for all who want to prepare for and respond to the new evangelical awakening brought on by our changing cultural context.

"If you're suspicious about new winds blowing across the evangelical coastland, please don't criticize until you've read "The Younger Evangelicals." Then, if you still want to criticize, at least you'll have the advantage of greater understanding, because Webber's book is by far the most thoughtful description I've seen of what's going on. If you're not critical but just curious, Webber will give you a thorough immersion into the emerging church. And if you're 'younger' yourself or young at heart, you'll find Webber giving voice to much that you have felt but couldn't yet articulate. Webber proves himself a sagely resource for this fresh, fledgling movement in this wise, warm, timely book."-Brian McLaren, pastor, author, senior fellow with Emergent (www.emergentvillage.com)

"At a time when many graying prognosticators are bemoaning the state of the church, it is refreshing to read a commentator of Robert Webber's stature who is optimistic about the future of the evangelical cause. Webber documents the presence of a cadre of people - whether young in age or merely young in spirit - whom the Holy Spirit is raising up to lead the church in its task of offering a biblically-rooted, historically-informed, and culturally-aware gospel witness for the twenty-first century. I am personally encouraged by Webber's findings."-Stanley J. Grenz, Baylor University

"Robert Webber's The Younger Evangelicals is an eye-popping, brain-bending look at where the evangelical church must head in the next decade if it has any hopes of impacting postmodern culture. A superbly researched, foundational work, it is easily the best primer on the emerging church that I have seen."-Sally Morgenthaler, founder of Sacramentis.com, author of Worship Evangelism