The Story of Monasticism 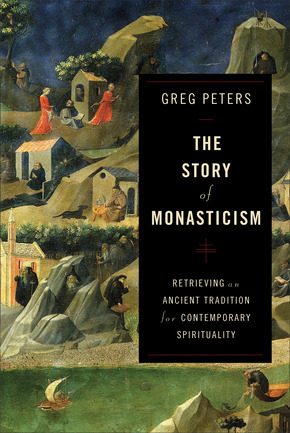 Some evangelicals perceive monasticism as a relic from the past or a retreat from the world, or they reject it as an aberration in Protestant circles. At the same time, contemporary evangelical spirituality desires historical Christian manifestations of the faith. In this accessibly written book, an expert in monastic studies offers a historical survey of monasticism from its origins to current manifestations. Greg Peters recovers the riches of the monastic tradition for contemporary spiritual formation and devotional practice, explaining why the monastic impulse is a valid and necessary manifestation of the Christian faith for today's church. Professors and students in Christian history and Christian spirituality classes will value this work, as will readers interested in evangelical spiritual formation.

Introduction: The Monastic Impulse
Part I: Anthony to Benedict
1. The Origins of Christian Monasticism
2. Of Anchorites and Cenobites
3. The Rule
Part II: Benedict to Bernard
4. The Flowering of Benedictine Monasticism
5. Other Voices: Celtic, Frankish, and Eastern Monasticism
6. Challenges of Christendom
7. The Road to Reform
Part III: Bernard to Luther
8. The Cistercians, Carthusians, and Other Reforming Orders
9. Regular Canons, Hospitallers, and the Military Orders
10. The Friars
11. Decline or Development? Lay Piety and Religious Life in the Late Medieval Era
Part IV: Luther to Merton
12. The Reformers and Counter-Reformers
13. Protestants and Monasticism after the Reformation
14. Continuing Roman Catholic Monastic Practice
Epilogue: Monasticism Today and Tomorrow

"I have never met a Protestant theologian--evangelical or mainline--who speaks about monastics with as much competence and ease as Greg Peters. This book presents a well-documented, interesting, and enjoyable summary of the Christian monastic way of life and also describes the personal journey of a young Baptist-turned-Anglican minister seeking God's face through contemplative prayer and by following Christ's footsteps back to the apostolic church. This journey leads 'from Benedict to Bernard,' from the Benedictine Rule to the Cistercian movement that emanated from the mystical theology of Bernard of Clairvaux, a favorite author of Aquinas also cherished by Luther and Calvin. The Story of Monasticism says much about contemporary monasticism, including American Benedictines, Trappists, and the impact of Thomas Merton. It is an exceptional book and will be an eye-opener for both Protestants and Catholics, laity and clergy alike. Greg Peters is like a man who found treasure hidden in a field, and in his joy sold all he had in order to buy that field. Many would be happy to make a similar investment."

Fr. Abbot Denis Farkasfalvy, research scholar in theology, University of Dallas; abbot emeritus of the Cistercian Abbey of Our Lady of Dallas

"This book accomplishes what it promises: to narrate the history of monasticism for those who are new to the topic and for those who already know something about it. Greg's writing is succinct without compromising thoroughness in a well-researched text that will be as useful for the classroom as it will be for the interested individual. What makes this historical introduction unique is that Greg does not leave the reader in the past; in the spirit of ressourcement, the story he traces (from the Old Testament to Thomas Merton) becomes spiritually edifying along the way."

"Greg Peters sets out to convince his readers that the church has always had and has always needed a monastic witness. He begins by making the case that Christians have long seen the monastery--in all its various forms--as an essential element of our life, ministry, and witness. He then gently asks where this necessary countercultural witness is in our world today. Carefully researched, balanced, and irenic, this book seeks to affect the way we do church by uncovering resources from those who lived in intentional Christian communities."

"Greg Peters has provided the evangelical community an invaluable service by laying before us a banquet of insight into the monastic impulse--the love for God, the desire for community, the draw toward a rule of life. Regardless of one's judgment of the value of various monastic movements and individuals, the reader cannot help but appreciate and learn from God's sovereign grace and movement among these believers throughout the history of the church who have sought to live out a life dedicated to the gospel."

"Beginning with the Qumran communities in early Judea and touching on nearly every era of Christian history, the author demonstrates how monastics have given the church a rich legacy of spiritual teaching and practice, and how the church, in its effort to confront contemporary societies, has drawn on that legacy. . . . [A] compelling study of the uses of the past in reforming the future."

"A serious, well-informed, and very broad study that encompasses a great deal of material, yet one that is very readable and accessible to the general reader. . . . This is a very interesting and well-organized book. . . . All history involves interpretation, and Peters is well qualified to interpret his sources. He has written an excellent book that almost anyone with even the remotest interest in monasticism will find helpful and even enjoyable."

"The book is a wealth of historical detail covering not only the basic foundations of monasticism, but also specific information on various rules of life and the logic of their development. . . . Historians will delight in the intricate precision of Peters' work. He writes from an objective, academic point of view, and presents a clear, concise, mostly complete background of monastic development. . . . For anyone wanting to know the whys and wherefores of the Religious Life, The Story of Monasticism is a good place to begin. . . . The writing style is fluid and comprehensible. The Story of Monasticism is well worth a read."

"[Peters] works to break new ground in several respects. . . . My fallback history of monasticism has always been that of the late David Knowles's Christian Monasticism. . . . But it's not my fallback anymore. The Story of Monasticism, among its other virtues, pays fuller attention to the monasticism of the desert, demonstrates the Benedictine Rule's only gradual supremacy in Europe, extends its survey of early monasticism into the East of Basil and the Cappadocians, and makes an honest attempt to discuss discouraging developments in monastic history in the half-century since Vatican II (1962-65).  . . . [The book] represent[s] a skillful retelling of the monastic saga with a view to encouraging the evangelical church to identify afresh with the monastic story."