The Shadow of the Antichrist 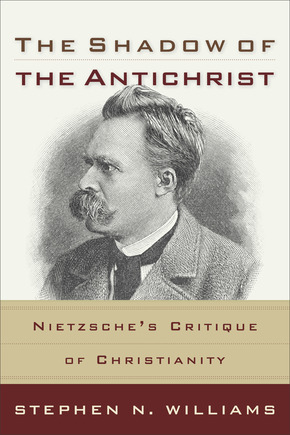 There have been many recent studies of postmodernism by Christian writers, but few have considered the continuing influence of Friedrich Nietzsche, the nineteenth-century German philosopher who was sharply critical of orthodox religion. Stephen Williams fills that gap with this study of Nietzsche and his continuing importance.

In this book, winner of a Christianity Today 2007 Book Award, Williams is particularly concerned with Nietzsche's critique of Christianity. Nietzsche's negative account of religion has cast a long shadow over twentieth-century philosophy, and Williams suggests that thoughtful Christians need to consider his case carefully.

Christian students of intellectual history and pastors will find this study a compelling account of an important strand of philosophical theology that has had great influence on contemporary culture.

"Stephen Williams writes on Nietzsche with philosophical astuteness, theological depth, and cultural relevance. He has picked a most formidable critic of Christianity to engage and does so fairly and accurately. Moreover, he writes with his usual flair and Welsh lyricism. This is a significant book to read in these postmodern times."

"The role of Nietzsche in forming what we call modern culture is of foundational importance, and Williams expounds this for us in a clear and compelling way. Every pastor and Christian educator should read and ponder this book when addressing the concerns of modern society."--Christianity Today

"[This book] constitutes the best 'introduction' to Nietzsche currently available. . . . An apologetic analysis of one of Christianity's most formidable critics at the level evidenced in this book is no small task, but where the darkness descends (as it inevitably does with Nietzsche), Williams' lyrical prose and meticulous scholarship ensures a sense of comprehensive analysis. . . . Williams has given us a most significant book worthy of serious scrutiny. There will be quarrels with various sub-texts of the work, no doubt, but it will undoubtedly now become a standard of interpretation to be reckoned with. For those wishing for an answer to the question, How did we get here? This would be a good place to find an answer."--Derek Thomas, Reformation21

"The Shadow of the Antichrist is an academic work, not a layman's introduction to Nietzsche. The 725 footnotes in Williams's text should make that abundantly clear. Nonetheless, there is benefit here for us all. . . . Williams shows us a shrill, embittered, and often mistaken Nietzsche. But he also helps us see a Nietzsche for whom honesty--truth embodied in action--is an absolute demand."--David Mills, Christianity Today

"Those looking for some very insightful comments on the various aspects of Nietzsche's life and thought will certainly find this . . . volume of interest. Williams knows Nietzsche well and treats him with an even hand."--Bruce Ellis Benson, Religious Studies Review

"[Williams] takes Nietzsche very seriously as a thinker, and in this significant work he subjects Nietzsche's critique of Christianity to a thoughtful and thorough examination. The result is not only a highly informative and perceptive analysis of Nietzsche, but also a wider ranging reflection upon subsequent Western intellectual culture which echoes themes found in Nietzsche. . . . Williams has given us a penetrating, richly textured study which not only illuminates Nietzsche's often obscure writings but also helps us understand broader cultural currents shaping perceptions of Christianity today. Williams' breadth of reading and familiarity with the literature is impressive. . . . Williams has studied Nietzsche for a long time, and one senses in his writing the respect and appreciation that come from sustained engagement with a worthy adversary. Although he is not hesitant to criticize Nietzsche's views, he does so only after placing controversial theses in their proper context, clarifying popular misconceptions and, when appropriate, asking what the church can learn from Nietzsche's critique."--Harold Netland, Cultural Encounters

"[A] lucid exposition of Nietzsche's critique of Christianity. . . . [A] solid and important [work] of scholarship that draw[s] attention to themes in Nietzsche we might otherwise neglect."--Matthew Ray, Heythrop Journal