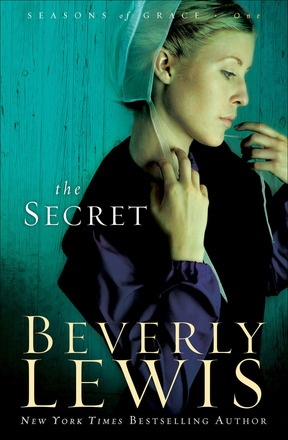 The Loving Hand of God Is at Work in Even the Most Unsettling Circumstances...

In the seemingly ordinary Amish home of Grace Byler, secrets abound. Why does her mother weep and wander deep in the night? And why does her father refuse to admit something is dreadfully wrong? Then, in one startling moment, the quiet life Grace has known is irrevocably altered, leaving her to question all she has been taught about love, family, and commitment.

"Beverly Lewis has published more than eighty books, many Amish-based such as this first book in this new series. Grace Byler is living a wonderful Amish life. She begins to notice her mother's strange behavior of weeping and wandering during the night. Neither parent will discuss the problem with Grace or even admit something is wrong. Then one day her quiet Amish home is shattered by an action of her mother. Grace is left confused and questions everything she has been taught. All her relationships are damaged, and she sets out to solve the secret. The reader discovers the secret, but Grace still is searching when the book ends. I am anxious to read more about Grace's life and how the secret affects the entire family in the sequel. Rating: 4"
--PD, Libraries Alive

"Grace Byler comes from an ordinary Amish family. But they have secrets. When her mother disappears, Grace calls off her marriage to her long-time sweetheart. When she tries desperately to put her life back together, she questions all she has known and been taught. But in the midst of the turmoil, Grace senses God's love and mercy."
--Charisma, May 2009

"Amish fiction is one of the hottest subjects in the Christian field today and Beverly Lewis is at the top of that genre. Her latest series, Seasons of Grace, begins with The Secret. Outwardly the home of Grace Byler looks typical to her fellow Amish and her neighbors. Inside the four walls is another matter. Why does her mother wanter late at night, crying and obviously in distress? Why does her father, reticent at the best of times, refuse to admit there is something wrong, even refuse to talk to her mother, Lettie about her troubles? Often when Grace is restless she hears her mother stirring and listens to her footsteps. She longs to share her mother's burden yet cringes to think what it might be and how it might affect her family. When Lettie leaves with only a note to let Grace, the young woman attempts to keep her family together while waiting to hear word of Mamma's safety and whereabouts. Grace had so wanted to share the happy news of her engagement to Henry with her mother but now that may never come to be. And she is having second thoughts about this oh-so-thoughtful and reserved man, one much like her own father who is so inept at relationships.

"Lewis' works are compelling to readers who find the lives of the Amish intriguing. Their simple faith is illustrated in her realistic stories of their everyday lives and the sorrows and troubles that often befall them, much like any group of people. Although a few of the issues in The Secret are resolved by the ending of the book, many are left unresolved as readers continue the series."
--Ceil Carey, Christian Library Journal, October-December 2009

"The Christian publishing sector is one of the few bright spots in publishing these days. One of the most prolific authors in Christian fiction is Beverly Lewis. During the past 15 years she has published more than 80 books.

"Lewis grew up in the Pennsylvania Dutch country and she is best known for her books which depict the everyday lives of the Old Order Amish of Pennsylvania. She has just published The Secret, the first book in her 'Seasons of Grace' series.

"The Secret is the story of Grace Byler, a young Amish woman in Bird-in-Hand, Pa. Like many modern Amish, Grace is experiencing the world outside of her tight-knit community. She has a part-time job at Eli's Natural Foods.

"Grace isn't married yet and she reflects that 'being single was a concern for any young Amish woman. But I supposed it wasn't the worst thing not to have a husband.' She lives with her family and she is becoming increasingly puzzled by her mother's mysterious behavior.

"Her mother appears to be troubled and while Grace is curious she is also somewhat reluctant to snoop into the reason because 'yet as much as I longed to be privy to my mother's secrets, something told me I might come to wish I never knew.'

"The simplicity of the Amish lifestyle is lovingly depicted here. But that simplicity doesn't make their lives any less complicated than those of us who might think that we live on the cutting edge of technology. Grace's mother is deeply troubled by something. Her father wants to pretend that everything is as it should be.

"Lewis does a marvelous job of capturing the merging of cultures that defines the Amish community in our midst. At one point a character observes that 'the GPS indicated how many feet she had to travel before turning. She marveled at this cool technology while her car followed the horse and buggy.'

"These books juxtapose this clash of cultures. The Amish venture into the modern world while still maintaining their stability and their deep religious convictions through simple lifestyles which preserve their beliefs despite the buzzing static of the high tech world around them.

"Lewis, who now resides in Colorado, has a devoted fan base in this region. She is one of the most industrious authors around. Most authors do one or two book signings per day. On current book tour of Ohio and West Virginia, Lewis is conducting 32 book signings in a mere nine days. That is Amazing."
--Vick Mickunas, Dayton Daily News, April 5, 2009

"Popular novelist and Amish specialist Lewis (The Brethren) launches a new series with this volume. Two young women, Amish Gracey Byler and graduate student Heather Nelson, stand as counterpoints in parallel plots involving two secrets. Grace's mother is troubled; Heather, whose mother had died of cancer, tells no one in her circle of her own diagnosis of terminal illness, which drives her to Pennsylvania Amish country in search of healing. Grace's mother makes a decision that painfully complicates the action and drives it forward. Grace, her family and friends and the Amish milieu are drawn with characteristically ample detail, right down to jars of preserves set out on the tables at many bountiful Amish meals. Lots of powerful emotions go characteristically unspoken in this reticent culture, though the reader won't miss them. By comparison, the emotional high-stakes Heather plot is less detailed and consequently less engrossing. Lewis lays out--and knots--many plot threads to pursue and resolve in subsequent installments in the series, ensuring readers' return."
--Publisher's Weekly

"In the first in Lewis' new series, the pace is a bit slower than in some of her previous books, but it all comes together when the long-kept, and unexpected, secret is finally revealed.

"SUMMARY: Since Lettie's encounter with an outsider at a barn raising, Grace Byler has noticed that her mama has changed. She's become quieter and restless, often wandering around late at night. Grace and her father sense that Lettie is keeping a secret.

"After the recent loss of her mother, Heather Nelson is shocked to learn that she has a potentially terminal illness. Heather is sure that some time away to rest, and visit a naturopath, in Amish country will help. As their lives intertwine, will Grace, Heather and Lettie find what they are searching for?"
3 stars
--Leslie L. McKee, Romantic Times Book Reviews, April 2009

"For all Ohio readers: Come out to a store near your home and meet beloved author Beverly Lewis. She will be delighted to greet you and autograph her latest release, The Secret plus any of her other books that you own or that are available for purchase in each store. Here is a schedule of her area stops:

"Popular Amish fiction author Beverly Lewis has chosen this new series--'Seasons of Grace'--to illustrate the concept of 'the loving hand of God (that) is at work in even the most unsettling circumstances.'

"In Book One of the series, The Secret, the riveting plot begins in the ordinary Amish home of Grace Byler.

"Grace is puzzled by her mother's wanderings and weeping deep in the night. To complicate matters, her father refuses to admit that something is dreadfully wrong. Then her mother makes a choice that sets the home in turmoil and Grace in confusion and grief. Is it fair of her mother to leave all of the family household chores for Grace to take over? And what will happen when her mother's secret is finally revealed?

"Another young woman, Heather Nelson, a graduate student, flees to Pennsylvania Amish country to keep the secret of her cancer diagnosis from her widowed father. She decides to take a room for the summer in the Byler's neighbor's home. Can she successfully hide her ill health from her dad who so recently lost his wife to cancer? Is that the right thing to do?

"Beverly is a master storyteller and expertly weaves a tale of suspense and deceit. The emotional high stakes of each secret is portrayed so expertly by Beverly. She continues these plot threads throughout the story and they are not all resolved by the end of Book One, leaving her readers eager for the publication of the next book in the series.

"Fans of Beverly Lewis will certainly enjoy meeting fictional characters, Grace Byler and Heather Nelson, as they must each deal with questions of love, family and commitment. Sometimes there are no easy answers. It is then that the love of family and a strong faith are most needed, along with the touch of God's grace. Readers need to keep a careful watch for the small touches of the beauty of His grace that Beverly adds to this riveting tale."
--Marijane Troyer, The Budget

"True confessions: I had never read a novel by Beverly Lewis, but now I understand their charms. In this first in a new series, Lewis introduces members of the Bylers, an Amish family being torn asunder by father Judah's silence and mother Lettie's erratic behavior. All this happens when eldest daughter Grace most needs her mother's advice about love. Meanwhile in Virginia, 24-year-old Heather Nelson has just been diagnosed with advanced cancer of the type that killed her mother. Lewis loosely ties these plot threads together and leaves enough hanging that readers will want to come back for Book Two."
--Susan Olasky, World, August 29, 2009