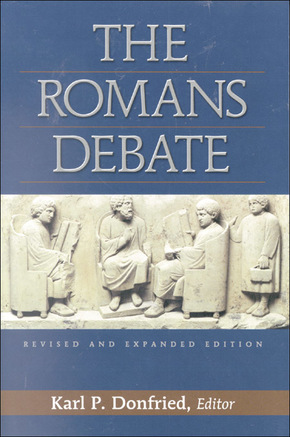 "The first edition was indispensable. Its revision and expansion make it even more valuable. To have the major studies in a single volume is not only convenient but obliges one to confront all aspects of a fascinating ongoing debate."--Jerome Murphy-O'Connor, OP, Ecole Biblique de Jerusalem

In 1977 a collection of essays appeared that quickly became a standard for studying the purpose and occasion of Romans. Now The Romans Debate: Revised and Expanded Edition is available in a newly designed and enlarged format. Besides the original essays, the new edition includes thirteen of the most cogent, recent articles on this subject; a comprehensive bibliography; and an index.

This is not a volume for the "already decided." Spanning the spectrum of interpretation, these essays attempt to challenge opposing views, complement points of consensus, and above all contribute to our understanding of Paul's controversial letter to the Romans. In its own unique way, each of these articles compels the reader to return to the text and to listen anew to the message of Romans both for Paul's day and for ours.

"The first edition was indispensable. Its revision and expansion make it even more valuable. To have the major studies in a single volume is not only convenient but obliges one to confront all aspects of a fascinating ongoing debate."--Jerome Murphy-O'Connor, OP, professor of New Testament, Ecole Biblique de Jerusalem

"The essays which have been added to this new edition enhance its value as a representative and informative collection of important contributions to the discussion about Romans."--Victor Paul Furnish, University Distinguished Professor of New Testament, Perkins School of Theology

"Having found Karl P. Donfried's 1977 collection, The Romans Debate, most helpful both in teaching and for my own research, it is good news that a new and expanded edition is on its way. The understanding of Paul is both informed and tested by the way one reads that epistle. The right key to Romans unlocks the mystery of Paul's mission. There is no pass key--but there are some good keys collected on this key ring."--Krister Stendahl, former Bishop of Stockholm; Andrew W. Mellon Professor of Divinity Emeritus, Harvard University, The Divinity School

"Readers of the Bible have already recognized the value of The Romans Debate, edited by Prof. Donfried, and will look forward to this expanded edition of it. The contributions to the expansion are written by well-known New Testament scholars and have already contributed to the renewed debate about Paul's Letter to the Romans. It is good to have such a collection available in a handy one-volume format."--Joseph A. Fitzmyer, SJ, professor emeritus of biblical studies, The Catholic University of America

"It would be hard to conceive of an easier way of introducing a student to the essential reading on Romans."--Journal of Theological Studies