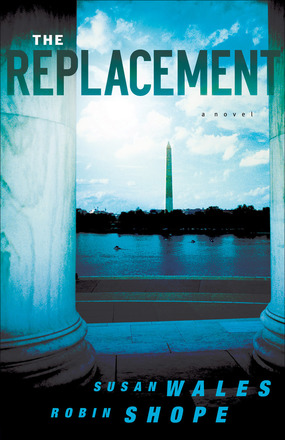 Jill Lewis is a top-notch investigative reporter in Washington D.C. Her fiancé, John, is an FBI agent. Neither can talk about what happens on the job. But both are dying to know.

When a high-profile senator is assassinated, Jill jumps at the chance to cover the story, soon digging up evidence of political scandal, intrigue, and deception. In the midst of what could be the story of her life, Jill's fiancé suddenly disappears. Where has John gone? Is he still alive? What has happened to him? Jill can only guess, but she has a sneaking suspicion that his mysterious disappearance has something to do with the headline-grabbing story she is investigating.

This action-packed suspense novel offers the perfect mix of politics, conspiracy, and a little bit of romance to create an intriguing page-turner that rivals Dee Henderson's best-selling O'Malley series.

"The suspense novel The Replacement co-authored by Susan Wales and Robin Shope reads like a screenplay for a feature film. It seemingly has all the qualities you are looking for; it opens with a bang, the central characters are attractive female and male leads, there is enough subterfuge to last a lifetime and the plot has enough twists and turns to keep you guessing throughout. The prerequisite element of romance is front and centre."--PhantomTollbooth.org

"For anyone who enjoys a mix of politics, conspiracy, and a bit of romance, this novel will not disappoint you with its page-turning pace of events."--Bookviews

"A fascinating and enthralling investigative political thriller for fans to enjoy."--Harriet Klausner

"The second novel by this writing team (after The Chase) revolves around Washington, DC, investigative reporter Jill Lewis, whose journalistic talents dig up evidence of political corruption. When her FBI agent fiancé disappears, Jill suspects the worst."--Library Journal

"Riveting story. Wales and Shope had me guessing and re-guessing the novel's outcome (and its villain) until the very end. Susan Wales and Robin Shope team up with a writing style that melds the plucky heroine of a chick-lit or romance novel with the danger and plot twists of straight suspense. It's a winning combination fans of Dee Henderson, Kathi Mills-Macias, and other romantic suspense authors will thoroughly enjoy."--InFuze Magazine

"Writing team Susan Wales and Robin Shope have brought readers another suspense-filled novel featuring newspaper reporter Jill Lewis. Lovers of inspirational suspense will find The Replacement a perfect match for their reading tastes, which moves at a fast pace throughout the entire book. Political scandal, intrigue, and a touch of romance will keep readers hooked until they learn the truth behind The Replacement."--RomanceJunkies.com

The Replacement contains one of the more creative murders I've encountered in fiction. An interesting mix of a chick-lit type heroine without the posse of girlfriends and a twisting plot line with moderate to heavy romance made for a unique read. Several plot twists and unexpected happenings are sprinkled liberally throughout. More plot, less fluff than chick-lit and spiced with some serious flirtation, The Replacement would make a nice vacation read."--NovelJourney