The Politics of Discipleship 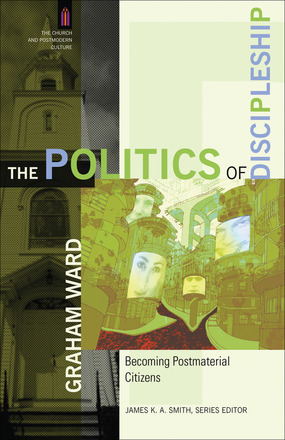 "A remarkably synoptic view of postmodern Western culture and a powerful recommendation for a theological therapy for that culture. Any reader wanting to share the fruit of an exciting, creative theological mind at work should read this book."--Tom Beaudoin, Theology Today In this fourth volume in the Church and Postmodern Culture series, internationally acclaimed theologian Graham Ward examines the political side of postmodernism in order to discern the contemporary context of the church and describe the characteristics of a faithful, political discipleship. His study falls neatly into two sections. The first, which is the more theoretical section, considers "the signs of the times." Ward names this section "The World," noting that the church must always frame its vision and mission within its worldly context. In the second section, "The Church," he turns to constructive application, providing an account of the Christian practices of hope that engage the world from within yet always act as messengers of God's kingdom.

Ward's study accomplishes two related goals. First, he provides an accessible guide to contemporary postmodernism and its wide-ranging implications. Second, he elaborates a discipleship that informs a faith seeking understanding, which Ward describes as "the substance of the church's political life."

Ward is well known for his thoughtful engagement with postmodernism and contemporary critical theology. Here he provides a broader audience with an engaging account of the inherently political nature of postmodernity and thoughts on what it means to live the Christian faith within that setting.

About the series: The Church and Postmodern Culture series features high-profile theorists in continental philosophy and contemporary theology writing for a broad, nonspecialist audience interested in the impact of postmodern theory on the faith and practice of the church.

"Extraordinary! Graham Ward's The Politics of Discipleship is an extraordinary book. Ward does nothing less than help us see how 'world' and 'church' implicate each other by providing an insightful and learned account of the transformation of democracy, the perversities of globalization, and the ambiguities of secularization. Perhaps even more significant is his theological proposal for the difference the church can make in the world so described. This is an extraordinary book."--Stanley Hauerwas, Gilbert T. Rowe Professor of Theological Ethics, Duke University

"In this book, Graham Ward boldly offers a fresh description of the consumer economy and the processes of globalization, examining the illusions they generate, the states of amnesia they call us into, and the slavery they impose. In the process, he constructs a counter-narrative of a Christian discipleship in the service of postmaterial values that is founded on an eschatological humanism and ecclesiology. The result is a new political theology, powerfully presented, rooted in Scripture and tradition, and fully engaged in reading the postsecular signs of the times."--Peter Manley Scott, senior lecturer in Christian social thought and director of the Lincoln Theological Institute, University of Manchester

"For some time now, Graham Ward has blended orthodox theology, biblical study, and cultural theory with an independent originality. Now he has added politics to this mix. The result is simultaneously a greater edge to his own theology and an imbuing of contemporary political theology with more realistic depth and practical prescience than it usually exhibits. An extremely significant volume in the present time."--John Milbank, professor of religion, politics, and ethics, University of Nottingham

"With erudition, insight, and sheer imaginative power, Graham Ward examines the complexities and tasks of Christian discipleship in a globalized world. There is no surer guide than Ward to the enticements and dangers of postmodern, postmaterial life--where values themselves have become virtual, adopted for a day--or to the hope of finding the true meaning of our still-present materiality in the practices of church and in the ecclesiality of the body of Christ. Yet Ward's encyclopedic grasp of political theory; his detailed, often dazzling readings of Scripture; and his profound inhabitation of theology are deployed with a humor and lightness of touch that renders this book both challenging and immensely readable. It is political theology but also a page-turner: impressive, provocative, and impossible to put down."--Gerard Loughlin, professor of theology and religion, Durham University

"[Ward] attempts to reconcile the challenges of a postmodern world with the call to discipleship. First, this rich but densely argued book addresses the postmodern nature and definition of democracy, global culture, and religious practice. The second portion asks how contemporary thinking Christians are to deal with the postmodern world in which they live. Ward's answer seems to be, somewhat shockingly, a renewed embrace of theocracy. . . . Ward's provocative notions call for a wide readership. . . . His best audience will be seasoned scholars."--Library Journal

"This is a superior book in the lively field of political theology. . . . Ward goes behind the news to give readers a philosophical and sociological analysis of our current situation. He acknowledges its complexity, and wisely does not reduce his diagnosis to clichés about the evils of the market/state. . . . He follows this with his theological response to our predicament."--Richard A. Davis, Theological Book Review

"Ward offers a stirring call to engaged discipleship. . . . The quality of his diagnoses, the energy of his writing, and the vigour of his engagement make this a rewarding manifesto for the agenda of political theology and ethics today."--Samuel Wells, Theology

"[Ward's] oeuvre is characterized by a provocative engagement with contemporary urban culture from the perspective of a radical theologian steeped in continental philosophy. . . . Insightful cultural references to the Harry Potter and The Lord of the Rings books and movies as well as other cultural phenomena abound. . . . Reflecting expertly on a range of texts from the Hebrew Scriptures and the New Testament, he creatively re-imagines political authority from an explicitly theological perspective. . . . It is difficult to see how students or scholars of political theology at any level, or graduate theology students generally, could fail to find The Politics of Discipleship anything other than bracing and rewarding--even if they disagree with some of the author's fundamental premises. Seminarians, priests, and pastors interested in the intersection between culture and theology will also find Ward engaging and insightful on some of the baleful contradictions of contemporary social and economic life. As a contribution to Christian political theology, The Politics of Discipleship is a work of estimable quality."--Greg Walker, Journal of Markets & Morality

"I am quite certain the ideas and information contained in this book will make their way down through seminary classes and undergraduate courses and eventually the church laity. This would be an excellent book for upper level graduate courses and doctoral work. . . . On an academic level, [Ward's] ideas do speak, if only generally, to the future of ministry to adolescents and their families as the church continues to adapt to the changing cultural milieu. This book would be an excellent in depth reading companion with other books that deal with cultural engagement and hermeneutics."--Steven Bonner, Journal of Youth Ministry

"A challenging and important book. . . . Ward manages to challenge Christians, like myself, who at times have been suspicious or dismissive of political engagement as merely something that the church does. . . . Thus Ward helpfully offers a more carefully construed theoretical basis for social action, for praxis, and as such provides some thoughtful warrant for the church's political engagement."--Bruce A. Sabados, Trinity Journal

"Ward's book is a deeply erudite and absorbing work of political theology, displaying a mastery of categories and ideas. I was particularly enamored with his exegesis of the Prodigal Son, where Ward models how theological interpretation of Scripture ought to be done. . . . [The book] should be read and reread by all priests, theologians, and laity concerned with the contemporary meaning of discipleship."--Jeff Nowers, Anglican Theological Review

"Ward's book will likely be most appealing to those who are interested in the nature of social, political, and religious structures and those who have an interest in postmodern thought. . . . For those who are so inclined, The Politics of Discipleship is a thought-provoking and spiritually challenging read. It is a call to all disciples to consider the role of the individual believer and the church in shaping the narrative on which the political and social structures are (and will continue to be) grounded. Ward's call for the church to speak boldly in the shaping of their respective cultures is a timely and important challenge."--Lori Speak, Journal of Spiritual Formation & Soul Care

"The Politics of Discipleship manifests extraordinary learning and models not only an interdisciplinary approach to theology (economics, political science, sociology, and more), but shows how productive, and perhaps even necessary, a philosophical theology can be for questions of practice, especially those that cross cultures and academic disciplines. . . . In its ambition, learning, and timeliness, The Politics of Discipleship is a remarkably synoptic view of postmodern Western culture and a powerful recommendation for a theological therapy for that culture. Any reader wanting to share the fruit of an exciting, creative theological mind at work should read this book."--Tom Beaudoin, Theology Today

"The Church and Postmodern Culture series continues asking the right questions. . . . Ward has written an often challenging and stunning text that illuminates what one might call meta-themes--themes that serve to illuminate different challenges, events, and conditions of the world."--Aaron Perry, Asbury Journal

"Drawing from a variety of academic and popular sources, Ward boldly weaves together the implications of several strands of thought to form an elegant, historically continuous narrative of how the West developed into its present form. . . . Ward does a solid job of laying out the economic processes and progressions of the phenomenon of globalization. . . . Ward's prescription for effective and faithful Christian action in the second part of the book is quite compelling and well argued. . . . The Politics of Discipleship [is] a strong and incisive contribution to the field of political theology, illuminating trends in the current Western world which scholars should continue to address. . . . Ward's work in this volume seeks to make theological motifs salient to the discussion of present circumstances, which every theologian would do well to attempt. . . . Like Christian action, theology works best when it remains in dialogue with others, and this book provides the field with an able interlocutor. I look forward to further installments on the themes he has set forth."--Petra Turner Harvey, Modern Theology

"I appreciated this book and the masterful way in which it traverses the intersection between theology, social theory, and political thought while displaying a deep passion for the Christian faith and the question of how to respond to the dilemmas and difficulties of the contemporary context."--Luke Bretherton, Scottish Bulletin of Evangelical Theology