The Pastoral Epistles with Philemon & Jude 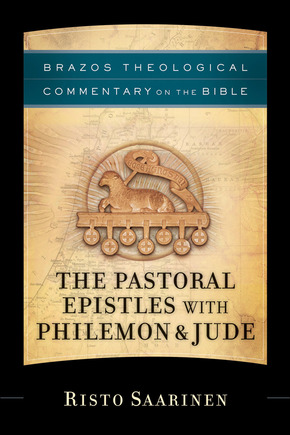 This addition to the Brazos Theological Commentary on the Bible offers a new interpretation of the theology and the narrative context of the Pastoral Epistles, Philemon, and Jude. Risto Saarinen makes three unique claims: 1) the Pastoral Epistles need to be understood in terms of character formation and diagnostic language, 2) the treatment of gifts and giving is a prominent feature of the epistles, and 3) a theological exegesis of these books results in a new view regarding the nature of doctrine.

"Risto Saarinen's commentary on the Pastoral Epistles, Philemon, and Jude does an excellent job of mediating the insights of recent large-scale works in a readable exposition that concentrates on theology, bringing in from time to time the contributions of such expositors as Chrysostom and Calvin. Helpful appendices and excursuses break new ground in situating the letters within the context of ancient teachings on moderation, mental disorders, and generosity, and the author's background in Scandinavian Lutheranism affords a fresh perspective. Saarinen is not uncritical of what he sees as the Pastor's misogynism and argues that following literally his tendency to accommodate church practice to contemporary social standards may achieve today the opposite effect from what was intended. His hermeneutical approach in terms of theological subjects and elucidatory predicates offers a fresh entry into the teaching of Jude. This is a stimulating study that helpfully and sympathetically challenges some traditionalist approaches without being the last word on the subject."--I. Howard Marshall, University of Aberdeen

"[T]his is neither a standard historical-critical commentary nor an ordinary monograph in systematic theology. Saarinen sees the Pastoral Epistles as late first-century compositions by someone seeking to defend Paul's legacy. . . . One aim of the series is to provide 'experiments in postcritical doctrinal interpretation' so that we might 'rehabilitate our exegetical imaginations.' Anyone interested in such a project will find this commentary rich in erudition and insight."--Patrick Gray, Religious Studies Review

"The Brazos Theological Commentary on the Bible is a grand experiment in theological hermeneutics. . . . Saarinen's commentary is a lively interplay of theological reflection and biblical exegesis. . . . He catches a lot, and he is clearly going somewhere as he moves along. Saarinen knows his endgame strategy as well as his opening gambits. The endgame, in this case, involves a few theoretical novelties. These are summarized in three important appendixes. . . . Appendix A offers reflections on the 'moderation of emotion.'. . . Appendix B fascinates, for it examines the theme of 'mental disorders.'. . . Given the close connection between extreme doctrines and mental disorder in the modern world, Saarinen's reflections on the topic are worthy of sustained attention. For those hoping to read more of Saarinen on giving and the gift, Appendix C does not disappoint. . . . The commentary may whet readers' appetites for further reading in contemporary phenomenology and theology of the gift. Finally, since many preachers and teachers are looking for exemplary expositions of 'difficult' texts in the Scriptures, it is worth noting that Saarinen offers one of the most exemplary readings of 1 Tim 2:8-15 (How Men and Women Should Behave) this reviewer has ever read."--Clint Schnekloth, Word & World

"[Saarinen's] whole commentary not only fleshes out Jude ('the most neglected book in the New Testament') a bit further: it also gives extensive treatment on four pauline epistles. . . . Saarinen manages to treat each book on its own terms, which makes for rewarding reading. . . . What he makes of the pastorals--which have often been maligned for somehow losing the tonic focus on christology in the certainly-pauline letters--goes a long way toward redeeming their value for the serious business of theology two thousand years later."--lutheranforum.org