Culture, Theology, and Ethics in the Modern World 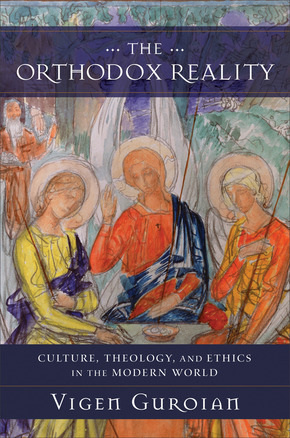 This is a book about the struggle of Orthodox Christianity to establish a clear identity and mission within modernity--Western modernity in particular. As such, it offers penetrating insight into the heart and soul of Orthodoxy. Yet it also lends unusual, unexpected insight into the struggle of all the churches to engage modernity with conviction and integrity. Written by one of the leading voices of contemporary Orthodox theology, The Orthodox Reality is a treasury of the Orthodox response to the challenges of Western culture in order to answer secularism, act ecumenically, and articulate an ethics of the family that is both faithful to tradition and relevant to our day. The author honestly addresses Orthodoxy's strengths and shortcomings as he introduces readers to Orthodoxy as a living presence in the modern world.

"This book comes at a time when tectonic shifts in Western Culture have diminished both the visible presence and the audible voice of traditional Christian faith and practice in the public square. Even within the household of traditional Christianity, there are fractures due largely to a lack of apostolic teaching and sound apologetics. Often lost in the internal Christian conversation is the voice of Orthodox Christianity. In fact, in the West, Orthodoxy is often simply an afterthought. Guroian has achieved the standing both within his own tradition and ecumenically to be a theological advocate for the Orthodox Church who reflects what is often referenced simply as 'the mind of the Church.' This publication is a long-overdue resource for apostolic teaching and practice that will bring a grounded and time-tested treasure of what C. S. Lewis would call 'mere Christianity' to those searching for guidance in a time of rapid cultural change."

"This book is classic Guroian but now with the strong flavor of a highly experienced theologian looking back over a lifetime's work. The book proves the point that no one can read Guroian without learning a great deal about the philosophy of culture. His sharp analysis of modernity makes him stand out like a prophet of Orthodoxy. If you seek someone who forces you to think through your view of Christianity in the modern world, I highly recommend The Orthodox Reality."

"Since Vigen Guroian is an Orthodox theologian, the temptation is to say we are fortunate to have someone able to draw on the insights of that tradition for those of us in the Western tradition. But that would not do Guroian or this book justice because Guroian is a theologian of insight who should be read to understand not what an Orthodox theologian thinks but how and what Christians in these confusing times should think and live."

"Few contemporary writers are more trustworthy than Vigen Guroian on Orthodox Christianity. Here Guroian traverses familiar themes: the church as constituted through the act of worship, the centrality of the Holy Spirit, divine transcendence in a secular age. He also discusses papal primacy, marriage, parenthood, and childhood, all supported by references to the church fathers and contemporary Orthodox theologians."

"This book, showing the mature and lively work of Vigen Guroian, invites readers to contend with the reality of Orthodoxy in its breadth and depth. Gathering the fruit of his scholarship in culture, theology, and ethics, Guroian develops a 'theology of culture,' with special attention given to the family, parenthood, and childhood. Here he gleans insights from thinkers as varied as John Chrysostom, Gregory of Nazianzus, John Henry Newman, Fr. Alexander Schmemann, and George MacDonald, and makes his own theological and interpretive forays into fraught issues of the faith. In doing so, he provides potent antidotes to today's 'feckless brew of expressive individualism, moral relativism, and godless utilitarianism,' inviting us to think deeply about what Orthodoxy offers to societal structures, ecumenical debates, and discussion about the family. Guroian juxtaposes cheerful optimism and sober realism as he encourages North American professors of religion to engage with what has too often become in their classrooms 'the lost tribe' of Christianity. His own interventions and suggestions go a long way in closing this gap: the general silence concerning Orthodox Christianity after the time of the Cappadocians."

"The author laments the lack of Orthodox thinkers in university departments of theology and in seminaries in this country. These sophisticated and eminently readable essays indicate how necessary the Orthodox voice is. Like the good householder of the gospel, Guroian brings forth things old and new."

"Guroian provides an interesting approach to the culture wars. Guroian challenges head-on the very real threats to the Judeo-Christian tradition, which imperil not only the West, but the East as well. . . . The Orthodox Reality does not intend to solve all problems. I found it to offer hope simply by acknowledging the problem and the need for a solution. Perhaps that is the greatest service Guroian can offer."

"Guroian's new analysis of secularism and how it insulates us from the power of the Gospel is timely and spot on. . . . Rather than trying to fight a losing battle to reclaim the lost Christian culture of pre-Enlightenment Europe, Guroian argues that Christians need to create a new organic version: an Orthodox-Catholic culture that grows out of our complete dedication to our mutual, sacramental, credal, and evangelical life in Christ. This book may not provide a complete guide on how to do this, but it is a prophetic description of what secularism has done and the destruction that awaits us if we further isolate ourselves from the Source."

"[This book] spans [Guroian's] entire corpus as a scholar of Orthodox history, theology, and cultural engagement. . . . In this collection of essays and lectures, interviews and reflections, Guroian is established as one of Orthodoxy's primary scholars on Orthodoxy in America. And this reader, whose life is deeply invested in seeing Orthodoxy thrive publicly and personally in a polarized religious and intellectual landscape, is grateful for the maps that Guorian has drawn for those of us who desire, perhaps, to embark on a new pilgrimage in America, one where the markers of Orthodox Christianity, rather than being projections of an Old World, or appropriations of the New World, could be 'a life-giving and redemptive comprehension' of what Orthodox tradition, in its liturgy and its processions, offers and proclaims."

"[This book] serves as a valuable resource for ecumenical dialogue, especially for Catholics seeking to understand the Orthodox faith. The text . . . covers extensive ground in introducing the reader to Orthodoxy, including culture, Orthodoxy in the modern world, ecumenical theology, and theological ethics."