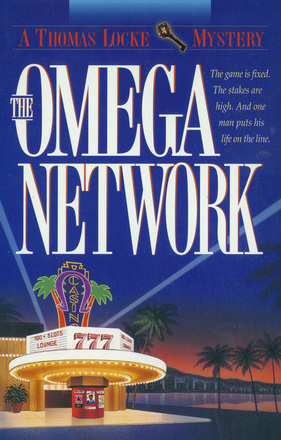 Chase Bennett is a troubleshooter for a chamber of commerce on the Florida coast. Visiting an old friend, a woman detective, he unwittingly becomes the critical link in a chain of criminal evidence stretching from a narcotics raid in Washington to telecommunications fraud in Miami.

Back home, a series of mysterious events unfolds. His boss threatens his job, a shady entrepreneur coerces him on a land deal, the detective disappears. As the Omega Corporation curries his favor, new pressures force him to take sides in the debate to legalize casino gambling. When the beautiful but ambitious Sabine seeks to rekindle an old romance, Chase is haunted by the suspicion that he is being lured into a dangerous conspiracy.

As he struggles to untangle the web of intrigue, Chase discovers political corruption and the money-laundering. The suspicion solidifies into fear for his life.

THE OMEGA NETWORK...
IS NO ONE BEYOND THEIR REACH?