Why Evangelicals Must Embrace Postmodernity 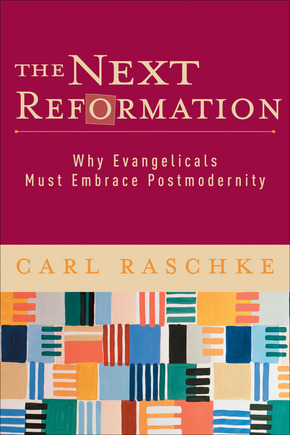 "A singular book. . . . Raschke has an uncanny ability to range from advanced theory and theology to the specifics of the ministry. He also provides an insightful diagnosis of the postmodern milieu and solid, accessible introductions to key postmodern thinkers."--James K. A. Smith, Pneuma

Postmodernism has become a four-letter word among many evangelicals. It has been blamed for every malaise of contemporary society and vilified as the greatest threat to contemporary Christian faith. In The Next Reformation, Carl Raschke acquaints readers with what postmodernism really is, and more importantly, what it is not. He argues that evangelical Christianity has allied itself with non-Christian philosophies, including rationalism and evidentialism, and suggests that breaking this alliance and embracing postmodernism may allow evangelical Christianity to flourish once again as a progressive rather than reactionary force in the present-day world.

Raschke then reveals the opportunities postmodernism brings to Christian faith. He examines how postmodern perspectives bring new meaning to the doctrines of faith alone and sola scriptura, illustrating how these doctrines can be revived by means of postmodern language and philosophy. Raschke goes on to explore how postmodern views of hierarchy and organization could alter the structure of the church toward the Reformation theme of the priesthood of all believers.

The Next Reformation finishes with an analysis of postmodern culture and ministry. Raschke examines postmodern strategies of outreach and evangelism as well as the impact of charismatic renewal on postmodern evangelism. He concludes with a plea for the beginning of a new appreciation of the relationship between faith and philosophy.

"All growth requires death to cherished idolatries and an embrace of what at first seems like the watery firmament of change. This brilliant tour de force exposes our addiction to modernism and all its rascal offspring and then throws us tumbling into the arms of Jesus. Raschke is a holy, tender, and earthy man who loves the Jesus who walks the pages of the Bible, trounces the arrogant, and gives his kingdom to 'sinners.' The Next Reformation is a demanding book, to be read over many months, through spirited conversation, and with a deep sigh of relief that both fundamentalism and liberalism meet their (re)maker."--Dan Allender, president, Mars Hill Graduate School

Author of The Wounded Heart, The Healing Path, To Be Told: Embracing our Stories, Shaping our Future

"Raschke offers a broad overview of the postmodern situation and addresses particular concerns as they relate to the changing context, including ministry and worship in the church. The fact that such proposals come from an acknowledged authority on postmodern thought will make the book attractive to both students and pastors."--John R. Franke, Biblical Seminary; coauthor of Beyond Foundationalism

"Sooner or later it was bound to happen: a thoughtful professional philosopher with Christian faith would engage the emerging/postmodern church conversation. The right person for the job, Carl Raschke, has risen to the occasion. Intelligently written for those already knowledgeable and accessible to those needing an introduction, The Next Reformation will become a primary trailhead for thoughtful people who are embarking on the faith journey into postmodernity." --Brian McLaren, pastor (crcc.org) and author (anewkindofchristian.com)

"Raschke has produced a creative and provocative textual pastiche that weaves together a constructive interpretation of theology, a critical investigation of history, a dynamic reflection on church growth strategy, and a poignant spiritual autobiography. In doing so, he reveals yet again why for over twenty-five years his voice has been so prominent in proclaiming the redemptive quality of the 'end of theology.' A quarter of a century ago, he announced that deconstructive theology was 'the dance of death upon the tomb of God'; in The Next Reformation, he extends an invitation for all to join the 'choreography of the Spirit' and dance with the graceful Lord. With evangelistic fervor, postmodern whimsy, and a definite prophetic abruptness, he censures traditional evangelical theology for being unequally yoked with a nonbiblical, foundationalist epistemology that not only undermines faith, Scripture, and ecclesiology but also establishes a hedgerow against the free flow of the Spirit's mighty wind. His pronouncement of a new Reformation will irritate many wallflower evangelicals, but it may also motivate a few to get on their feet and move to the rhythms of a postmodern celebration of Christ's freedom and love."--B. Keith Putt, professor of philosophy, Samford University

"With deep passion and matching erudition, Raschke compellingly argues that postmodernity not only has something to teach evangelicalism but also calls it to a new Reformation. Masterfully drawing on postmodern thinkers, Raschke exposes the idolatry of modernity and points readers back to faith. Even those who disagree with his vision for the church will have to take it seriously."--Bruce Ellis Benson, associate professor of philosophy, Wheaton College; author of Graven Ideologies: Nietzsche, Derrida, and Marion on Modern Idolatry

"What would happen if Christians embraced postmodernism instead of resisted it? Could it lead to a veritable revival or revolution? According to Raschke . . . the answer is a resounding yes. In this hip and challenging book for the Christian community, especially for believers interested in apologetics, he aims to 'evangelize the evangelicals,' arguing that truth is not necessarily propositional but instead personal and relational. . . . Those whose faith is primarily cerebral won't be comfortable reading this work because it dares to question foundational assumptions about the relationship between faith and reason. But regardless of whether one agrees with his premises and conclusions, Raschke emerges an engaging, insightful, and lucid author. Recommended for all libraries."--C. Brian Smith, Library Journal

"It is time to put the Reformation behind us, along with its warring children-fundamentalism, liberalism and the many flavors of 'evangelical' Christianity that have done more to dogmatize, politicize and commercialize the Gospel than truly manifest its saving power for postmodern times. Serious Christians need a fresh start . . . here is an essential point of departure."--The Discerning Reader

"It is rare to find authors who seek to push us beyond our current thinking. Most often we choose books that appeal to, and consequently shore up, our worldview with like-minded concepts and narratives. As a Pentecostal I found Carl Raschke's The Next Reformation deeply challenging. Raschke argues, from the basis of his own Pentecostal roots, for a new direction in evangelicalism. . . . I have not read such a lucid and illuminating overview of the development of western thought and postmodernism in particular. From Luther, to Kant, to Hegel, to Nietzche, to Kierkegaard, to Derrida, to Deleuze, to Heidegger, to Milbank, to Schaeffer, to Caputo, Raschke provides a metanarrative that is compelling and exciting. . . . Raschke has here developed an alternative imagination for evangelicalism. . . . I have little doubt his treatise is directly relevant to charismatics across all denominations. This is one of those books I intend to read again and again, one from which I still have much to learn. Raschke has affected my worldview in a way few authors have. A recommended read, and I suggest a work that could well prove prophetic for the shape of the church to come."--Graham Cameron, Stimulus

"This book assembles a powerful argument for postmodernism as the vehicle for a renewal of the Reformation's call for a relationship to God based on faith, Scripture and the priesthood of all believers. . . . This book has great appeal in its sophisticated discussion and earnest tone that mixes sometimes abstract and dense analysis with personal experience and current culture and religion. . . . I found this book quite informative, stimulating and thought provoking."--Borden Painter, Reviews in Religion and Theology

"Carl Raschke's got the philosophy of the emerging culture right. . . . So, should you read [this book]? Yes, if (a) you're a strategic decision-maker or researcher; you don't have to like postmodernity, but you will have to deal with it; (b) you're a practitioner, trying to figure out how to speak gospel in the emerging culture; and (c) you're a missionally minded observer, seriously curious as to what exactly is going on here."--Mark Thames, Baptist Standard

"[Raschke] has given us a singular book: rather than engaging postmodernism as merely an academic phenomenon or merely a pop-cultural 'Xer' trend, The Next Reformation is without peer insofar as it engages both philosophy and ministry in postmodern culture. Raschke is one of only a handful of legitimate experts on postmodern 'thought' (he was reading Derrida for theology in the 1970s, long before Derrida was hip) who is comfortable not only in the rarefied air of French theory, but also in the nitty-gritty of ministry on the ground--and in the streets, and at the altar. The movement of the book is from theory to practice, and in the process, Raschke does an admirable job of showing students and pastors why they should care about what people are thinking. He then shows why and how ideas have legs that impact the practices of worship and discipleship. . . . There is much to like about the book. Raschke has an uncanny ability to range from advanced theory and theology to the specifics of the ministry. He also provides an insightful diagnosis of the postmodern milieu and solid, accessible introductions to key postmodern thinkers."--James K. A. Smith, Pneuma

"A great book that outlines a philosophical and theological defense of postmodern ethos."--Mark Brouwer, Banner

"Raschke asks the right question: 'Has Christianity silently and inexorably become paganized? What remains that is truly evangelical in evangelical Christianity?' His call for nuance among evangelicals as they engage postmodernity--even for embracing prominent features of this cultural condition--is commendable."--Daniel J. Treier, Modern Theology

"This book is valuable for researchers on postmodernism and for seminary libraries."--Lyman E. Reed, Missiology