The Mystery of God

Theology for Knowing the Unknowable 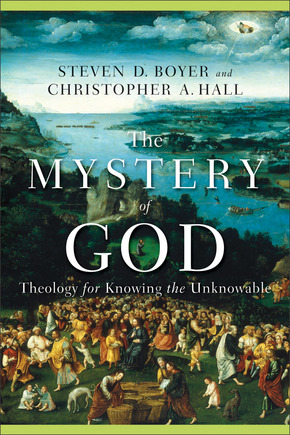 How is it possible to do theology if the “theos” that we believe in is too great for human minds to take in? Christians have always known that God is a mystery and have developed strategies to aid believers in knowing him genuinely, but in a way that takes seriously the fact that he is beyond knowledge. Steven Boyer and Christopher Hall argue that the “mystery of God” has a rightful place in theological discourse and contend that considering divine incomprehensibility invites reverence and humility on the believer’s part. They investigate the biblical, historical, and practical foundations for understanding the mystery of God and examine its implications for a variety of theological issues and practices.

The Mystery of God will serve as a supplemental text in college and seminary theology courses. It will also appeal to pastors and church leaders seeking intellectual and practical guidance for knowing the unknowable God.

Introduction Part 1: The Sun 1. The Meaning of Mystery 2. The Necessity of Mystery 3. The History of Mystery 4. The Knowledge of Mystery Part 2: The Landscape 5. The Mystery of the Trinity 6. The Incarnation 7. Mystery and Salvation 8. Mystery and the Life of Prayer 9. Mystery and World Religions Epilogue: Seeking, Finding, and Seeking Indexes

"Rightly understood, mystery is a powerful and liberating theological reality. Boyer and Hall skillfully explore the wonderful truth of mystery, employing such topics as the incarnation, salvation, and prayer as examples of how it works in the church's confession and practice. In these pages there is real wisdom."

"Mystery is one of the most overworked words in the Christian vocabulary, and yet it's essential whenever we dare to speak about the God who is, as Luther says, both hidden and revealed. This book is both an invitation to contemplation and an exercise in humility. Boyer and Hall bring together theology and spirituality in a way that will help both seasoned travelers and new pilgrims on the road of faith."

"This is a welcome volume: a clearly written, insightful approach to a difficult theological topic. I especially appreciated--and learned from--its taxonomy of mysteries and its idea that as a theological category, mystery should be understood in revelational and dimensional terms. Those terms nicely clarify and thematize what's distinctive about a Christian understanding of mystery and do so in a way that will resonate with many of the book's readers."

Kevin Hector, assistant professor of theology and the philosophy of religion, The University of Chicago Divinity School

"This book is a gem. Boyer and Hall display the beauty of historic Christian orthodoxy in clear, elegant prose. Skillfully avoiding the twin plagues of arrogant rationalism and anti-intellectual irrationalism, they demonstrate the tremendous potential of the concept of mystery to illuminate central doctrines and practices of the Christian faith. Scholars, pastors, and students alike will reap rich rewards from this outstanding contribution to contemporary evangelical theology."

"A fine Protestant theological treatment of mystery in theology is long overdue, and Boyer and Hall have provided it."

"The Mystery of God is a refreshing challenge to evangelicals to reject rationalistic approaches to faith while at the same time learning humbly from the Great Tradition. Boyer and Hall mine riches from the fathers that will help their readers appreciate the beauty of the Triune God and the orthodox tradition in which he is found."

"At a time when many Christians--and many evangelicals in particular--are discovering or rediscovering 'the mystery of God,' there's an urgent need for discernment. Steven Boyer and Christopher Hall's 'theology for knowing the unknowable' is a gift to the church."

"Here at last is a clear, precise, and careful treatment of mystery in Christian life and theology. Boyer and Hall chart a middle course between the cliffs of rationalism and the whirlpool of irrationalism, bringing readers safely through to the spiritual homeland, to lives hidden with Christ in God. There is no mystery mongering here. When Boyer and Hall appeal to mystery, they are not obfuscating but opening up and clarifying vast ranges of theology and spirituality."

"[Boyer and Hall] are both excellent scholars, but they are even more impressive as teachers. Though the authors take us on a whirlwind tour of Christian theology . . . they never once fall prey to jargon. Quite to the contrary, they hold their reader's attention from beginning to end, never missing a step or hiding behind opaque academic language or scores of technical notes. In terms of lucidity, choice of analogies, irenic tone, nuanced common sense, and connection to the practical, day-to-day life of the man in the pews, they come very close to reaching the bar set by C. S. Lewis. The authors succeed brilliantly in focusing our eyes on the central mystery of our faith: that we are made in the image of a God whose actions, though freely chosen, are constrained by his very nature, 'with the result that full, meticulous sovereignty can be sustained right alongside full, libertarian freedom.'. . . All Christians know that the God of the Bible is personal, but few have gone as far as Boyer and Hall in drawing out the full implications of God's radical, transcendent Personhood."

"[The authors] seek a middle path between rationalism and faith; throughout they reveal themselves to be evangelical Christians extraordinarily cognizant of the great Christian traditions from the desert fathers and mothers to the Greek and Latin Church fathers to leading monastics (East and West), scholastics, reformers, modernists, and postmodernists. . . . Theologians and philosophers as well as clergy and well-educated laity--including mainstream Christians interested in how God can be known and yet remain mystery--and those seeking deeper faith, in accord with certain aspects of modernism and postmodernism, may find this splendid book challenging, accessible, and rewarding."

"Boyer and Hall do an excellent job unpacking the subject of mystery, which is constantly alluded to in theological work but rarely carefully analyzed. The authors achieve clarity without sacrificing depth."

"This book examines divine mystery, which the authors convincingly argue should always be a topic for theological reflection. . . . This is a well thought out and readable work that draws not only on biblical texts but also on the history and tradition of the church, from an evangelical perspective. Each chapter logically builds on ideas and arguments given in previous chapters."

"Unlike the cheapening and abuse of the category of mystery in which it is only brought in after one reaches a level of speculation that can no longer be sustained, Boyer and Hall affirm that theological endeavoring from beginning to end (both in terms of its enabling conditions as well as its material content) is marked by mystery. This sensibility alone is a most welcome addition, especially to Protestant traditions that are prone to emphasize the perspicacity of their theological authorities, particularly scripture. . . . This book, both in terms of its orientation and especially its opening chapters (where the authors engage in some very helpful categorical delineations), make it a very worthwhile read for all those who aim to reason theologically in a faithful and doxological way."

"The Mystery of God is thorough and detailed without being unapproachable. . . . Boyer and Hall do not rush to resolve thorny problems and take seriously the viewpoints of Catholics and Protestants, Arminians and Calvinists, old dead guys and younger living ones. . . . The authors recognize and even celebrate the inescapable role of mystery in the life of God's people. . . . The mysterious nature of God can cause us to turn away in disbelief, as I once I did. Or it can draw us deeper into worship. The Mystery of God helped me do the latter."

"Facing head-on the difficult task of affirming the theological language about God's work in the world while affirming the limits of human knowledge, Boyer and Hall do not shy away from some of the most baffling and ongoing theological questions. Just for that, this work deserves an appreciative reading audience. . . . This work will certainly appeal to a broad scope of readers from pastors to students and lay persons interested in dipping their toes into the deep, broad, and, at times, daunting waters of the mystery of God. . . . This book will be welcomed even by the novice in theological language. Boyer and Hall's care for defining their terms, laying out the groundwork for the issue-at-hand, and carefully walking the reader through paradoxical waters of personally knowing and worshiping the Creator God should be applauded."

"Far too often God's mystery is seen as a burden to be overcome--and people often think this is the task of theologian. Yet, Boyer and Hall suggest that this is a characteristic to be embraced as a positive aspect of God himself. To that end they explore 'divine mystery' through both philosophical and theological categories drawing out how mystery helps to define both God's actions and his nature as a being. . . . The mystery of God is something all Christians can contemplate."

"The Mystery of God is one of the best things I've read in awhile. It has stretched me, and even when I initially disagree with it I usually come around and see their side. Boyer and Hall nimbly hold the double line of mystery and revelation. . . . Boyer and Hall do a fine analysis on what we mean when we say God is a mystery. . . . This is rich theology, and artfully written. There are many nuggets in this book that you will chew on and want to include in your teaching or preaching. . . . If you are responsible for teaching God and [the] ways of God to others then you really need to read this. You will be much better for it. I know I am."

"[This book] would be really worth having if one wants a profound rumination on the theology of mystery."