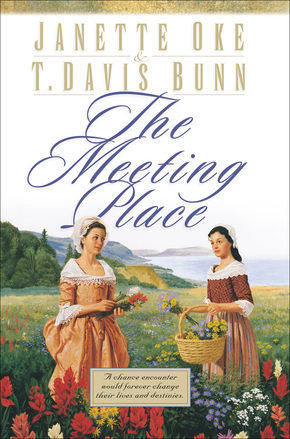 Crafted by two masters of inspirational fiction--Janette Oke and T. Davis Bunn--and combining the engaging historical settings, rich characterization, and heartwarming messages quintessential to both authors, The Meeting Place is another timeless story for you to cherish.

Set along the rugged coastline of 18th century Canada in what was then called Acadia (now Nova Scotia and New Brunswick), The Meeting Place re-creates a world that was home to native Indians, French settlers, and English garrisons. Such diverse populations did not live in accord, however. Instead, they were isolated within their own groups by a brewing political tension under the difficult English rule.

Amid such chaotic times two women, both about to become brides and both trying to live lives of quiet peace, meet in a lush field of wildflowers. Louisa, a Frenchwoman, and Catherine, who is English, continue to meet secretly through the seasons, sharing both friendship and growing faith.

The outside world does not mirror their own tranquil happiness, and the dreaded crackdown by the English throne threatens far more than their growing bond. In the face of a heart-wrenching dilemma, Louisa and Catherine strive to maintain their faith and cling to their dreams of family and home.

Winner of the Christy Award, presented by the Christian Bookseller Association to honor the best in Christian fiction.