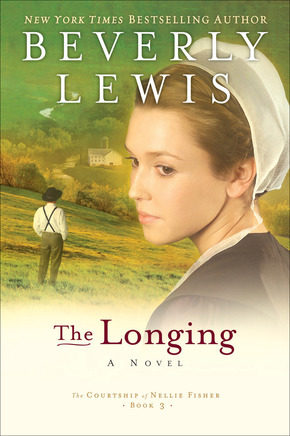 In This Highly Anticipated Series Conclusion,
a Single Moment Can Transform a Life ... And a Heart.

Although she still thinks of Caleb Yoder, Nellie Mae Fisher has broken up with her beau, choosing instead to follow the ways of the New Order. Yet her yearning for a husband remains, and new possibilities beckon, taking her heart by surprise.

A tragic accident binds Caleb once more to the father who so opposed his affection for Nellie ... and to the farm that will no longer be his. As he longs for freedom, Caleb soon discovers he cannot forget the only girl he's ever loved.

"Nellie Mae Fisher, her parents and several other members of her Amish community have accepted the message of salvation and joined the New Order Church, causing her to lose her Old Order beau, Caleb Yoder. Caleb's father is a strict, stubborn man who has disinherited him for being involved with Nellie Mae. So Caleb has moved into his grandparents' home and no longer is in contact with her. He is later called back home to Honey Brook when his father is seriously injured by his mule. His cousin, Chris, whose family became Christians a long time ago and are now in a Mennonite church, also volunteers his help on the farm. While in Honey Brook, Chris meets Nellie Mae, not realizing that she and Caleb were once betrothed to each other. As they see each other more often, Chris and Nellie Mae begin to realize they have feelings for each other, but did Nellie Mae ever really get over Caleb?

"The Parting and The Forbidden were the first two books in the series by Beverly Lewis entitled The Courtship of Nellie Fisher. Book three, The Longing, is based on actual events that happened in Lancaster County, Pennsylvania, in 1966 when the Lancaster County New Order Church was birthed. In this Amish novel, Caleb's father's stubborn adherence to his Old Order ways causes much pain for his family and those who love them. The characters are simple folk that are both believable and endearing. The title for this book is quite appropriate as Caleb longs for Nellie Mae and she in turn longs for a deeper understanding of her Lord and Savior. Nellie Mae's love and excitement for her new Christian faith is clearly evident throughout this novel. While The Longing is a fictional accounting, the impact of Christianity on the Amish way of life has certainly been a major source of discussion, contention, and hope for many people, and this book is a great reflection of those very things."
--Sherri Myers, Christian Library Journal, October-December 2009

"This final book in the series wove all the threads of Nellie Fisher's tangled life together in a most satisfying way. The series revolves around the impact Christianity had on an Amish community. In The Longing, family splits, shunning, separation of lovers, grief and forgiveness, all come into play in this saga of extended family. Keeping track of all the characters presents a challenge, and some of the situations portrayed seem far-fetched, but somehow the reader's desire for a happy ending for Nellie keeps the pages turning. It is delightful to immerse oneself in the Amish community and its ways of doing things. I hated to leave these pleasant simple people behind when I turned the last page. I suggest the three books to be read in sequence, but The Longing can be enjoyed on its own. The Parting and The Forbidden preceded The Longing."
--EB, Libraries Alive

"The COurtship of Nellie Fisher series that began with The Parting by Beverly Lewis continues in The Forbidden and concludes with The Longing. This is a very religious, Christian-oriented series, and would make for interesting discussions in a church-affiliated book club. The storyline is based on true events in the history of the Amish community in the 1960s, when the church was divided between those who followed the offer of salvation in the New Testament and those who did not. Young Nellie is mourning the death of her sister Suzy, whose diary revealed that she accepted biblical salvation just before her death. Nellie and some of her relatives also find themselves drawn to the new belief. But the church schism has split apart families, friends and sweethearts. And one of Nellie's sisters wants to 'jump the fence' and leave the Amish community altogether. Meanwhile, one of Suzy's Mennonite friends finds himself attracted to Nellie. Can she choose between men, as well as between faiths?

"This is a well-written series about Amish life, filled wit hope and tragedy, love and fulfillment, but be warned that there is quite a bit of religious proselytizing. I enjoyed books one and three more than two, which is the most religious. And one of the storylines, about a woman's inability to have children, is almost unreasonably sad."
--Mary Louise Ruehr, Record Courier, January 23, 2009

"The Longing, the third and final installment in 'The Courtship of Nellie Fisher' series, will surely please longtime fans of the best-selling author. The saga concludes with answers to questions like: Will Eli and Rosie ever experience the miracle of a child? Does Rhoda continue to pursue a life apart from her Plain Amish family? Will David Yoder continue to shun his son Caleb for his youthful mistakes? Has Nellie Mae finally resigned herself to a life without Caleb?

"As in the first two books of the series, Lewis gives readers intimate insights into Amish culture and beliefs. The story follows the Yoders and fishers throughout difficult life circumstances stemming from a church split between believers in the Old Order and those in the New, liberated by the salvation-by-grace message.

"The pace of the first two chapters of The Longing is a bit slow, but the story picks up in the middle. Readers are rewarded with resolution to multiple storylines and a welcome twist at the end."
--Deborah Finnamore, Christian Retailing, October 13, 2008

"Beverly Lewis, a New York Times best-selling author, will sign copies of The Longing from 3 to 4 PM Monday at Agape Booksellers in Jackson Crossing.

"This is the final book in her trilogy about Amish life, 'The Heritage of Lancaster County,' which has sold more than 6 million copies.

"The Shunning, the first in the series released in 1997, has roots in her own family's history, according to Lewis, who agreed to a telephone interview at a Colorado airport Thursday afternoon as she was leaving home in the 35-stop book tour.

"I used to hear my mother and her sisters talk about my very courageous grandmother who left her strict Mennonite community and married a farmer and not the preacher her family picked out for her,' Lewis said.

"Lewis was raised in Lancaster County, Pa., which not only has a huge Amish population but 'strict old order Mennonite.'

"'Some of my first cousins are horse-and-buggy Mennonites,' Lewis said.

"When she as growing up , Lewis said her family was good friends with many Amish families and would often be invited for Sunday dinner in their homes.

"'One real good friend had 13 children, and the mother didn't have to do much work because she had six or seven daughters,' Lewis said.

"'Their view of life is the more children they have, the less work. Their kids are an asset and not a liability,' she said.

"These memories, she explained, have been simmering in her mind over the years and were finally put to paper.

"'I've gotten lots of mail from the Amish,' she said. 'One camp says they love my stories even though my books are banned. They read them "under the covers" so to speak. The other camp says they are surprised how I know so much about their weddings, funerals, the secret practices of their doctors--which some say border on witchcraft--and they ask who I've been talking to. That validates that my research is accurate.'

"Research is so important that Lewis treats it almost like another character in a book. For this trilogy, she said she and her family actually moved in with Amish families several times."
--Monetta L. Harr, The Jackson Citizen Patriot (Mackson, MI), September 20, 2008

"This final book in the Courtship of Nellie Fisher series contains poignant examples of how God's saving grace can change a person, as well as struggles not unique to the Amish culture, like stubbornness, loss and finding your faith. The end neatly ties up the series.

"SUMMARY: Nellie Mae Fisher is trying to establish a new life without Caleb Yoder, her longtime beau. Caleb's dad, David, had not approved of Nellie's newfound salvation in Jesus.