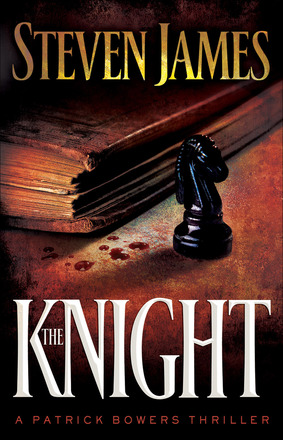 In The Knight, the third installment in the bestselling series of thrillers featuring FBI criminologist Patrick Bowers, the stakes have never been higher.

Agent Bowers is used to tracking the country's most dangerous killers, but now it looks like a killer is tracking him. When he realizes the murderer is using clues from an ancient manuscript as a blueprint for his crimes, Bowers faces a race against time to decipher who the next victim will be and to stop the final shocking murder--which he's beginning to believe might be his own.

Gritty, chilling, and intense, this psychological thriller is guaranteed to keep readers up all night.

"Once again, James has given us a rip-snorting thriller with a beating heart, a calculating cat-and-mouse game of chess, and a satisfying ending."--Eric Wilson, New York Times bestselling author

Praise for The Pawn:

"There is nothing not to like."--The Suspense Zone

Praise for The Rook:

"It's a wild ride with a shocking conclusion."--Publishers Weekly, starred review

"Readers will be on the edge of their seats."--Romantic Times top pick

"Steven James hooked me with his debut, The Pawn. Now in his explosive sequel he has absolutely blown me away."--The Christian Manifesto