The Jewish World around the New Testament 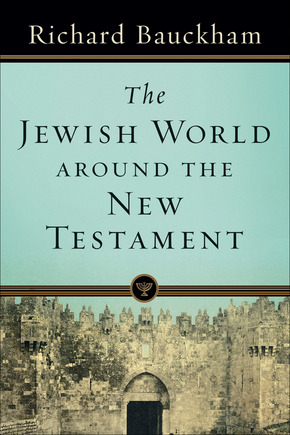 "Bauckham's essays are fresh in their approach, inspiring, erudite, and well argued throughout."--Christoph Stenschke, Review of Biblical Literature
Renowned biblical scholar Richard Bauckham believes that the New Testament texts cannot be adequately understood without careful attention to their Judaic and Second Temple roots. This book contains twenty-four studies that shed essential light on the religious and biblical-interpretive matrix in which early Christianity emerged. Bauckham discusses the "parting of the ways" between early Judaism and early Christianity and the relevance of early Jewish literature for the study of the New Testament. He also explores specific aspects or texts of early Christianity by relating them to their early Jewish context. Originally published by Mohr Siebeck in the Wissenschaftliche Untersuchungen zum Neuen Testament series, this book is now available as an affordable North American paperback edition. It is a corecipient of the Franz-Delitzsch Award for 2010, offered by the Institute for Israel Studies in Giessen, Germany.
Contents
1. Introduction
2. The Martyrdom of Enoch and Elijah: Jewish or Christian?
3. Enoch and Elijah in the Coptic Apocalypse of Elijah
4. The Rise of Apocalyptic
5. The Delay of the Parousia
6. A Note on a Problem in the Greek Version of 1 Enoch 1.9
7. The Son of Man: 'A Man in my Position' or 'Someone'?
8. The Apocalypses in the New Pseudepigrapha
9. Pseudo-Apostolic Letters
10. Kainam the Son of Arpachshad in Luke's Genealogy
11. The List of the Tribes of Israel in Revelation 7
12. The Parting of the Ways: What Happened and Why
13. The Messianic Interpretation of Isaiah 10:34
14. The Relevance of Extra-Canonical Jewish Texts to New Testament Study
15. Josephus' Account of the Temple in Contra Apionem 2.102-109
16. Life, Death, and the Afterlife in Second Temple Judaism
17. What if Paul Had Travelled East rather than West?
18. Covenant, Law, and Salvation in the Jewish Apocalypses
19. The Restoration of Israel in Luke-Acts
20. Paul and Other Jews with Latin Names in the New Testament
21. The Horarium of Adam and the Chronology of the Passion
22. The Spirit of God in Us Loathes Envy (James 4:5)
23. Tobit as a Parable for the Exiles of Northern Israel
24. The Continuing Quest for the Provenance of Old Testament Pseudepigrapha
Indexes

Corecipient of the Franz-Delitzsch Award for 2010, offered by the Institute for Israel Studies in Giessen, Germany

"Bauckham's essays are fresh in their approach, inspiring, erudite, and well argued throughout. They show the methods and the promise of studying early Judaism for its own sake and in order to understand the New Testament in the Jewish world around it. The volume has left me with new insights and much to ponder and pursue."

"The author's contributions to the study of both ancient Judaism and the New Testament are such that one can only rejoice at the appearing of a volume that gathers twenty-three studies originally published between 1976 and 2008. Here they are very conveniently brought together and supplied with several indexes. . . . The essays . . . are all detailed and stimulating."

"Bauckham's erudition, his persistent confidence in the historical grounding of the New Testament materials, and his provocative challenge to prevailing views and assumptions make this concentration of his writings in an available format useful."

"Bauckham has dedicated his life to the study of ancient Judaism in general and the NT texts in particular. . . . Most of the articles have previously been published in important journals or publications, but to have them all together in an accessible form offers the reader the opportunity not only to follow the development of an eminent scholar, but also to benefit from and enjoy the range of material available for the student and scholar in the field of ancient Judaism and the NT."

"The essays address a very wide range of topics, but they are bound together, as the title suggests, by Bauckham's conviction that 'the New Testament writings belong wholly within the Jewish world of their time.'. . . He therefore brings New Testament texts and traditions into a close--and highly productive--conversation with Jewish texts such as the writings of Josephus, the Dead Sea Scrolls, and early rabbinic material, although the collection displays his particular interest in the Apocrypha and the Old Testament pseudepigrapha, especially apocalyptic texts and traditions. . . . Close textual study and meticulous argumentation--with virtually no stone left unturned--characterize the volume from beginning to end. . . . Many of these essays have stood the test of time and continue to be highly influential; they are widely acknowledged as shedding significant light on the biblical/Jewish interpretative matrix of the New Testament writings, as well as offering rich methodological insights into the use of Jewish (and early Christian) sources in the scholarly debate on subjects such as the origins of apocalyptic and the identification of criteria for determining authentic and pseudepigraphic letters. Their publication as an accessible collection of essays in this--more reasonably priced--edition by Baker Academic is therefore to be greatly welcomed. . . . [These] essays are essential reading for those engaged in the study of the New Testament in relation to early Judaism."

"The quality of the contributions, as one has come to expect from this scholar, is consistently high and even stellar. Clearly, Bauckham has established himself as one of the leading New Testament scholars of our day, and this collection further showcases the enormous scope of Bauckham's scholarship. . . . Students of the New Testament are certainly advised to consult a given essay in this volume if it impinges on their research interest."

"These are all excellent articles. . . . Many articles will be of great benefit immediately, whereas others will demand some effort. Bauckham's use of ancient material in biblical interpretation is a model for research students and others. . . . This volume is both a helpful and convenient collection of important articles on various topics of interest on the Jewish background of the New Testament."

"This paperback edition . . . has thankfully made [this] collection more financially and geographically accessible. . . . Bauckham uses a range of sources to elucidate the Jewish world of the Second Temple period. . . . His ability to go beyond simple parallels to entire, shared patterns of exegetical thought is particularly impressive. In addition to his diverse use of sources, these essays demonstrate a wide interest across the various issues in Early Judaism and their relevance to the NT. . . . Bauckham's ability to write for a diverse readership, with a sweeping range of scope, all while maintaining his academic thoroughness, should actually be a model for aspiring biblical scholars. Overall, this collection is an enjoyable source on Second Temple Judaism, not only for the indispensable technical detail it contains, but also for the example it provides for the methodology and rigor that was developed through a lifetime of scholarship."