The Jewel of Gresham Green 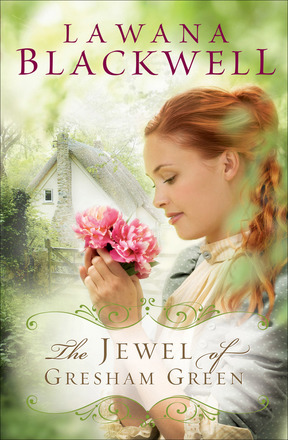 Will this quaint village be the safe haven her heart craves?
To protect her precious daughter from the danger nipping at their heels, Jewel Libby must flee the only home she's ever known. Caring friends direct her to the vicarage in the peaceful dairy village of Gresham, but she arrives there to find Vicar Andrew Phelps and his wife immersed in troubles of their own. Their son Philip, a successful London surgeon, has a controlling wife who resents his close family ties. And daughter Aleda lives in a cottage on the outskirts of Gresham, where she adamantly pursues her writing career and her solitude... often to the exclusion of others.
When Andrew becomes ill and in need of his son's skills, and Aleda's quest for privacy unwittingly advances an evil man's schemes, Jewel finds the tables turned... she is the one offering support and a source of strength. But an unlikely romance is about to change everything...

"Blackwell captivates as she reveals her main character's deepest thoughts and feelings. Readers will savor all the strengths and weaknesses of each endearing character. It's wonderful to see the redemptive power of family and friends." --Lindy J. Swanson, Romantic Times Book Reviews

"If you're looking to spend a few enjoyable hours with Maeve Binchy-like characters in a historical English setting as fascinating as Jan Karon's Mitford, The Jewel of Gresham Green is your book." --Violet Nesdoly, Blogcritics.org

"This novel, set in a quaint village in England during the late 19th century, has a heartwarming story with strong characters. Readers will remember other books by Blackwell containing some of the same characters, although this novel is not a sequel. Jewel Libby flees her home in Birmingham with her daughter Becky and arrives in Gresham with a note from the vicar at her home church asking Vicar Phelps at her new church in Gresham to help her find employment and a safe place to live. Upon arriving, she finds that Vicar Phelps and his wife have troubles of their own. Adela, his stepdaughter, comes to Jewel's rescue with the offer of a place to stay at her home. Jewel finds a friend and the tables are turned--she offers support and a source of strength to Adela and others in the Vicar's family and the people of Gresham."
--SV, Libraries Alive

"The tenement manager singles out Jewel Libby's young daughter, Becky, for his attentions. Fearing the man will act on his perverted insinuations, Jewel seeks help from her vicar's wife. For a time, they're safe, but the man finds them. Desperate, she flees London and and accepts the assistance of Vicar Andrew Phelps and his family in Gresham Green.

"When Jewl and Becky arrive, all is not well for her rescuers. The ailing vicar faces surgery. His daughter, Aleda, who takes in the pair, wrestles with fears about submitting her novel to a publisher. Philip, a successful surgeon, returns home to care for his father, but can't hide his marital problems. Jewel becomes involved in their lives, helping Aleda, and then working for Philip and his wife. Despite the challenges they face, Jewel finds friendship and hope, as well as a safe haven for her daughter with these people who care about her.

"Fans of Blackwell's previous 'Gresham Green' novels will enjoy another visit to this quaint 19th-century English village. Peopled with characters that have grown up since the last novel, readers will find that love still cushions life's blows and guides hearts in the vicar's family."
--Kim Peterson, CBA Retailers + Resources, August 2008

"Lawana Blackwell offers another of her pleasing stories set in a quaint English village. This tale of young widow Jewel Libby continues Blackwell's Gresham Chronicles series, but familiarity with the earlier books is not required for following the plot of this volume. When an ill-intentioned man threatens, Jewel flees with her daughter to the countryside. In the quiet dairy town of Gresham, Jewel and her little girl come to know the busy and varied extend family of Vicar Phelps, the community of Gresham, and its visitors--the noble and the not-so-noble. Through thick and thin, the faithful Jewel relies on God for strength to work hard and build a good life for her daughter and for herself.

"In fleeing from problems, one often finds more. The Jewel of Gresham Green tells the story of Jewel Libby fleeing her home village to protect her daughter. But as she leaves that trouble, she finds the quiet village has many problems of its own. Dominating wives who prevent a father's treatment, coupled with desire for solitude that is hurting family bonds, lead Jewel to being the only one who can save a family from falling apart. A romance done with unique concepts, The Jewel of Gresham Green is highly recommended reading and would make a popular addition to community library collections."
--James A. Cox, Midwest Book Review, October 2008