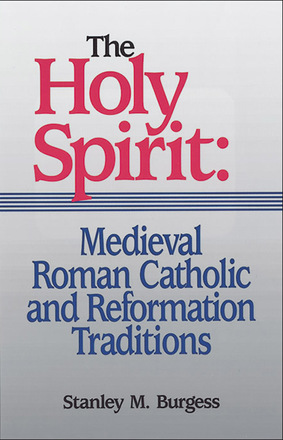 The Holy Spirit: Medieval Roman Catholic and Reformation Traditions (Sixth-Sixteenth Centuries) is the third in a series of three volumes devoted to the history of Christian pneumatology.

In the first volume, The Holy Spirit: Ancient Christian Traditions (formerly titled The Spirit and the Church: Antiquity), Stanley M. Burgess detailed Christian efforts from the end of the first century to the end of the fifth century A.D. to understand the divine Third Person. Volume 1 explored the tensions between the developing institutional order and various prophetic elements in the Church.

The second volume, The Holy Spirit: Eastern Christian Traditions, brought together a wealth of material on the Spirit from Eastern Christian traditions, a rich heritage often overlooked in Western Christianity. By exploring the various ways in which Eastern theologians understood the Third Person of the Trinity, volume 2 showed how modern Christians can gain a wider vision and fuller understanding of the workings of the Holy Spirit in history and in our own generation.

This concluding volume examines medieval Roman Catholic and Reformation attitudes toward the Holy Spirit beginning with the writings of medieval Catholic theologians from Gregory the Great and Bede to Aquinas and Bonaventure. Subsequent sections describe the contributions of influential women such Hildegard of Bingen, Birgitta of Sweden, and Catherine of Siena; "fringe" figures such as Joachim of Fiore and the Cathars; the magisterial reformers Luther, Zwingli, and Calvin; leading Catholic reformers such as Ignatius of Loyola; and the "radical reformers" Thomas Muntzer and Menno Simons.