The Gospel according to Moses

What My Jewish Friends Taught Me about Jesus 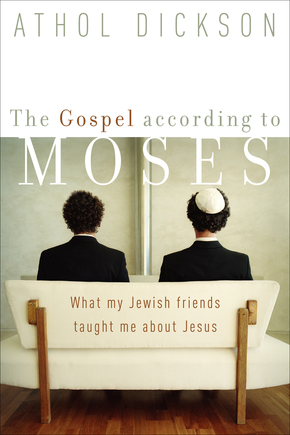 After spending five years attending a Hebrew Scripture study group, Chever Torah, evangelical Christian Athol Dickson decided to write a book that might create a genuine encounter between Christian and Jewish interpretations of Scripture. In simple yet profound prose, The Gospel according to Moses investigates some of the primary theological differences between Christianity and Judaism--as well as the common ground. Passionately tied to scriptural narrative and text, each chapter looks at Christian and Jewish perspectives on topics such as monotheism, doubting God, scriptural paradox, suffering, grace vs. works, and the place of Jesus in the Hebrew Scriptures.

For Jewish readers, Dickson presents Christianity as "a reasonable response to the books of Moses, the writings, and the prophets." For Christian readers, the book is offered as "a welcome confirmation that the most basic tenets of our faith are rooted in the earliest moments of creation, in the Garden, in the cool of the day."

The Gospel according to Moses is refreshingly eloquent and deeply personal. It will attract devout Christians and Jews who wish to better understand their historical and biblical relationship. Its Socratic tone makes it a wonderful teaching tool for clergymen, teachers, and Bible study leaders.

In The Gospel according to Moses, I hope to show that Christianity is a reasonable response to the books of Moses, the writings and the prophets. For Christian readers, I hope this will be a welcome confirmation that the most basic tenets of our faith are rooted in the earliest moments of creation, in the Garden, in the cool of the day. Ours is a Torah-based faith.

The differences between Christianity and Judaism are too important to ignore or minimize, but that does not mean there is little value in learning from each other. When I first wrote this book, the newspaper headlines were already filled with churches burning, synagogues defaced, and hate-filled men attacking Christian and Jew alike. While this book was being considered for publication, Muslim terrorists inflicted history's most deadly attack on the United States in the name of their religion. In this time of increasing violence against persons of faith by those who hate us for our specific beliefs, or simply because we do believe, all "people of the book" should stand together. But we are often divided by misunderstandings, which have grown through self-perpetuating centuries of isolation between the Christian and Jewish communities. If ever there was a time to learn the truth about our differences from each other rather than reinforcing false assumptions among ourselves, it is now. And we must respect those differences, even as we search for genuine common ground and cultivate it side by side. As the famous novelist Tom Clancy once wrote: "One hallmark of intellectual honesty is the solicitation of opposing points of view."

"I have seldom read pages more moving, challenging, or filled with love and truth. Dickson is not afraid to ask hard questions--and God is not afraid to answer. I will reread this book many times!"--Angela Hunt, author of The Shadow Women

"Athol Dickson's The Gospel according to Moses chronicles his journey into a foreign country that turns out to be home. Christians will be drawn deeper into the fullness of their faith by learning from the author the oneness of the Bible that proceeds from the oneness of God. A valuable resource. A worthwhile read. Genuine encounter with Jewish faith in the setting of Torah study taught Athol Dickson that God loves an honest question and, most of all, honest questioners. Christian readers will be challenged to embrace Jews as true friends of God without having to abandon faith in Jesus as the Son of God. Christians are to obey Jesus' command to "Love God ... and love your neighbor as yourself," we might start by acknowledging that Gentiles were first neighbors ourselves who were loved by Jesus and other Jews. Athol Dickson teaches us that to love Jews in spiritual friendship leads us to love more deeply the God who has invited us to share in the blessings of Abraham. Personal, thoughtful, critical, and honest: The Gospel according to Moses leads the reader on an informative and provocative journey of discovery. Christians will not only learn more about the Jewish roots of their faith, they will learn more about the God of their faith. Athol Dickson has given us a rigorous challenge and a hopeful path."--Dr. George A. Mason, Senior Pastor, Wilshire Baptist Church, Dallas, Texas

"A delight to read . . . and to learn from. Mr. Dickson's growth experience is a testament of how much Christians and Jews share in common. While not trying to homogenize the two faiths--he remains to the end a believing evangelical Christian--he has recognized the truth of Paul's words in Romans 9-11 that Christians are grafted onto the rich olive tree of Israel from which they nourish their spiritual sustenance. While Jews cannot accept his still unmet expectation of the world's ultimate acceptance of Jesus--Jews included--he is nonjudgmental about that conviction. We'll just have to wait for the Messiah's arrival and ask him if it is his first or second coming."-Rabbi Yechiel Eckstein International Fellowship of Christians and Jews

"The Gospel According to Moses is not a read for the faint of heart. It requires a pith helmet and the soul of an explorer. Athol Dickson is our trusted guide--a man unafraid to explore the thorny paradoxes of our faith. Athol pulls apart the tangled truths of Torah to help us discover the treasure that awaits us at the heart of the gospel. But this is no journey into the heart of darkness. It is a brave adventure into the heart of light. May you never recover from the truth you find there."-Reg Grant, Dallas Theological Seminary

"Athol Dickson takes the Bible seriously. As this book so clearly demonstrates, he is a deeply committed Christian and a gifted student of Scripture. The courage and candor of his convictions have helped me to clarify my own Jewish faith, and I hope for the privilege of studying and arguing with Athol for a long time to come."--Senior Rabbi David Stern, Temple Emanu El, Dallas, Texas

"Imagine being the only Christian in a room of liberal, Orthodox Jews. You're there for a no-holds-barred Bible study in which no question is off-limits. Dickson took the challenge and five years later was amazed at his faith's evolution. By studying Judaism, Dickson learned Old Testament truths Christians rarely see. Without question, Jesus is the One Way to the Father and to heaven. However, God's grace extends even to those who disagree that Jesus was the Christ. While we can't understand all the eternal implications, we must hope that perfect justice will be tempered by perfect love. It's not our place, Dickson explains, to judge the everlasting fate of our Jewish brothers and sisters. Readers will be stretched and strengthened as they explore Christianity's roots. Students of all ages, regardless of scriptural prowess, will relish this journey toward truth and be changed by the adventure." --CBA Marketplace

"The book delves into some of the primary theological differences between Christianity and Judaism--and emphasizes the common ground between them. Each chapter examines perspectives from both faiths on topics such as monotheism, doubting God, scriptural paradox, suffering, grave vs. works and the place of Jesus in the Hebrew Scriptures. . . . One of Dickson's purposes in writing about his interfaith experience is to build bridges between Christians and Jews, but not at the expense of the basic tenets of the Christian faith. 'This is definitely a Christian book from a Christian perspective,' Dickson explained. 'It's very important that readers understand that going in, especially Jewish readers, because I don't want people to think I'm trying to evangelize through deception.'"--Christian Retailing

"Dickson is endearing in his enthusiasm for learning, and he encourages Christians to explore their Jewish roots as a way to grow in their faith."--Cindy Crosby, Christianity Today

"An open-hearted, sometimes painfully honest account of what this Christian learned during five years of studying Torah with Jews. His book is thoughtful, insightful, and diplomatic. Don't miss The Gospel according to Moses; this is a book from which both sides in the Jewish-Christian debate can learn."--Alan Cochrum, Dallas-Fort Worth Star Telegram

"Dickson seeks to communicate what he learned, not only about Judaism, but also about his own Christian faith. . . . Yes, he found differences, usually of emphasis, yet it is the similarities that surprised Dickson, and communicating this discovery is the heart of his message. Especially useful is his recognition that Judaism is a religion based upon God's grace every bit as much as Christianity. . . . Dickson's effort is to be warmly welcomed by Jewish people. However, it is conservative Christian readers who appear to be the target audience."--Mark D. Nanos, Religious Studies Review

"Forever changed by his participation in Chever Torah--a Jewish group study of Scripture--Athol Dickson sets out in an eminently readable book to show how his faith 'has been informed and enriched by contact with Jews and Judaism'. . . . The book itself is similar to such a Chever Torah, exploring ever more deeply the paradoxes of our faith . . . and a multitude of honest questions, interlarded with quotes from Hebrew Scripture and Jewish writings. . . . The Gospel according to Moses is a page-turner and one is assured that Dickson has remarkably learned a 'decidedly Jewish pastime: wrestling with God'. . . . Every reader is invited compellingly to engage in just the same activity."--Shabbat Shalom

"The Gospel According to Moses adds a whole new spin to [the] Christian-Jewish relationship. . . . Dickson fills his pages wrestling with what he's learning at Chever Torah. . . . Don't be misled into thinking Dickson's all about apologetics. He produces a wonderful chapter on anti-Semitism in the history of the church, cutting apart the common objection that no 'true' Christian could have engaged in such hatred. . . . So what has taken away from his studies at Chever Torah? 'Strange as it may seem,' he writes, 'the Jewish perspective of Chever Torah had given me a richer, more solid foundation for my own faith.' That's a perspective evangelicals who've had any contact with Judaism or Israel can resonate with."--Steven Gertz, Books and Culture