The Gospel according to Heretics 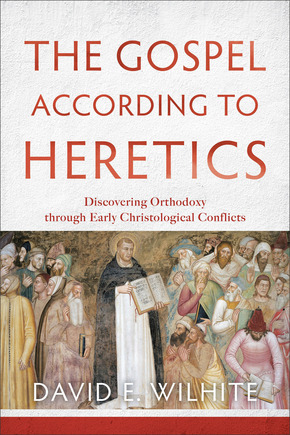 In this volume, a recognized expert in early Christian theology covers the major christological heresies from the first eight centuries of Christianity. What did the ancient heretics say about Jesus and why? David Wilhite offers a charitable reading to carefully discern the concerns that led them to their conclusions, teaching orthodox Christology by explaining the false starts. While some studies offer a revisionist take on various individual figures, The Gospel according to Heretics takes a more comprehensive approach, covering the whole era of the ecumenical councils. It also situates Christianity in relation to Judaism and Islam.

Drawing on up-to-date scholarship yet accessible for beginning students, this engaging introduction to the christological heresies not only helps readers understand teachings about Jesus that the early church rejected but also shows how the history of theology is relevant for today's church. Professors and students in theology and church history courses, pastors, and interested laypeople will value this work.

"Written with good humor, clarity, insightful, and sensitivity to various religious traditions, Wilhite's volume presents ten heresies of early Christianity that introduce the nonspecialist reader to the problematic questions of just what these heretics, as later defined, believed and why those beliefs were later condemned. I know of no better introduction to the topic to put into the hands of students and scholars alike."

"In the rapidly growing web of interpretations of early Christianity, this well-informed, popularizing study brings about order without imposing simplicity and addresses conflict without attempting to solve it. Turning 'orthodoxy' and 'heresy' with dexterity and caution into analytical tools, Wilhite offers his readers effective insight into the complex world of the early church. His account is neither about winners nor about losers; what it offers instead is a strategy for piecing together a credible early Christian narrative in which history meets theology and both can benefit from the encounter."

Willemien Otten, professor of history of Christianity and theology, University of Chicago

"This book does a number of things extremely well. It takes readers from the shallow end of the pool of early Christian theology into deep waters and enables them to float. It gives heresies their due while always keeping at least one eye on the positive message of Christian truth--that is, it is not transfixed by 'the dark side.' It is written with clarity both conceptually and in terms of expression, while being impressively learned. I appreciate in particular the attempt to discuss Reformed Protestantism in a retelling of the iconoclastic controversy and to broach the delicate and intricate subject of early Christian theology in relation to nascent Islam. It is quite a breathtaking achievement."

Mark W. Elliott, head of the School of Divinity and reader in church history, University of St. Andrews

"This volume by David Wilhite is a thoughtful and refreshing contribution to both academia and the church. Avoiding sensationalism, skepticism, and subjectivism, Wilhite carefully reinterprets heresy and orthodoxy with theological nuance, historical acumen, and ecclesial sensitivity. I commend this insightful and accessible book to scholars and students alike as readers are invited to search for the gospel according to orthodoxy, rooted in the grace of Christ, through the gospel according to heresy."

"The providential role of the heretics in ancient Christianity was to challenge the worshiping community to return to the classic doctrinal consensus on scriptural teaching. The task is to mark boundaries to teachings that are other than the right teaching according to the best minds of the church. David Wilhite has made these boundaries much clearer, enabling readers today to better grasp the Word of God the Father incarnate in the Son by the power of the Spirit."

"This is an unusual book, aimed at communicating the dynamics of the development of Christology to an audience not steeped in late antique thought. It draws from contemporary scholarship and primary texts and conveys key ideas and evidence to support a reading of the christological 'center' working itself out in different contexts over many centuries. Wilhite allows a narrative to emerge, aware that telling the story may be the best way to begin an induction into the Christologies of early Christianity. I commend this book to the motivated Christian determined to understand the significance and achievement of christological development."

"This fascinating tour of early christological heresies belongs in the library of anyone interested in Christian theology. With winsome clarity and impressive brevity, David Wilhite demonstrates how these heresies have often been misrepresented and misunderstood, masterfully summarizing a wealth of historical research. This is not an apologetic for heresy, but it is an appeal for charity. Each chapter illustrates how much we stand to gain when we move beyond caricature and appreciate the real complexity involved in these debates."

"[Wilhite] digs deep into the schisms of early Christianity in his deep and comprehensive study of early religious leaders and influential church councils. . . . His main focus is homoousios, or the substance of the Christ, which is the basis of the The Council of Nicaea. Some of the most interesting chapters consider the Gnostic gospels and offer a comparative study of Islam and Christianity. Wilhite is most comfortable discussing Christology. He clearly delineates the ways miscommunications and misunderstandings factored into how the ecumenical councils resolved disputes of doctrine. . . . This book is ideal for a scholar seeking to study church history, or an educated layperson wanting to know more about church councils, Gnostics, and modern day Muslims."

"[This book] aims to discuss one of the oldest adages in Christian theology: the nature and errors of various heresies but with the novel idea that these so-called fallacies had defining importance for the early church, forcing church leaders to define their faith and doctrines. . . . There is much to be said for a writer conversant with Monophysitism (the position that Christ has only a single 'nature' which is either divine or a synthesis of divine and human) and ready to share that knowledge with general audiences. . . . This book will be of interest to academic libraries and valuable for reading groups."

"Impressively well written, organized, and presented, [this book] is an inherently fascinating study for both scholars and non-specialist general readers with an interest in the history and development of the early Christian communities following the death of Jesus. . . . The Gospel according to Heretics is a masterpiece of theological scholarship and certain to be an enduringly popular addition to community, church, seminary, and academic library Christian Theology reference collections and supplemental studies lists."