The Goodly Fellowship of the Prophets

The Achievement of Association in Canon Formation 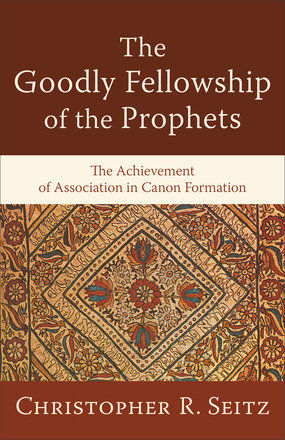 "A meaningful contribution to the ongoing discussion regarding the development and arrangement of the Old Testament. Future explorations of these issues would do well to consult and engage Seitz's provocative claims."--Christopher Bechtel, Expository Times Just below the surface of any Christian view of the Bible is the knotty issue of the biblical canon. How and when was it decided which books would make up the Bible? What makes a book canonical?

Respected Old Testament scholar Christopher Seitz has long been at the forefront of canon research. His particular interest has been the prophets--the interrelationships among the Prophetic writings provide important evidence that any understanding of canon must incorporate. In this volume, Seitz delves more deeply into the prophetic corpus, showing how the Old Testament fits into the canon's development. Utilizing the latest research on the biblical prophets, Seitz challenges current understandings of the formation of the Christian canon and reveals canonical connections woven into the fabric of the Prophetic Books. He argues that the Law and the Prophets cohere and give shape to the subsequent Christian canon.

About the series: The Acadia Studies in Bible and Theology series, sponsored by Acadia Divinity College, offers critical assessments of the major issues that the church faces in the twenty-first century. Authored by leading authorities in the field, these studies provide readers with requisite orientation and fresh understanding to enable them to take part meaningfully in discussion and debate.

"Seitz offers an alternative vision of the Old Testament: its structural logic, its internal relationships, its history of formation. The result is incisive, exhilarating, and quite constructively provocative. It will be read and discussed with much profit by theologians, biblical scholars, pastors, and seminarians."--Stephen B. Chapman, associate professor of Old Testament, Duke Divinity School

"Seitz has made a major contribution to canonical studies. He argues that the common distinction between Scripture and canon is illusory because it fails to understand the fundamental theological force at work in the prophetic documents that relates them to each other and to the Torah. Seitz shows that the Law and the Prophets of Israel were indispensable to the New Testament not only for the purposes of background, context, and theology but also for the shaping of the New Testament canon itself."--Stephen G. Dempster, Stuart E. Murray Associate Professor of Religious Studies, Atlantic Baptist University

"The Goodly Fellowship of the Prophets takes the discussion concerning Old Testament canon formation to another level. Seitz mounts an impressive array of arguments against standard conceptualities of Old Testament 'canon development' as he demonstrates that the early church never operated without a canon. With great scholarly care, insight, and breadth, Seitz argues that the material form of the Old Testament canon is a significant hermeneutical matter that demands special attention. This is a work that should shape the discussion within the discipline."--Mark S. Gignilliat, assistant professor of divinity, Beeson Divinity School, Samford University

"[Seitz] is a prolific author particularly interested in OT studies with special attention to Hebrew prophecy, theological interpretation of Scripture, and canonical reading of the Book of the Twelve. . . . This book offers a good analysis of the canonical formation of the tripartite Hebrew Scriptures and their place in shaping the Christian canon of the Bible. . . . The current volume is a solid contribution to the growing field of canon studies. . . . Seitz's research will provide an enduring resource for scholars engaged in research of the biblical canon."--Igal German, Journal of the Evangelical Theological Society

"Seitz makes a genuine contribution to the canon discussion by bringing the implications of recent OT historical-critical research to bear on the issue of canon formation. This book is a stimulating read for all who wrestle with understanding the nature of the OT and its possible influence on NT canon formation."--Andrew Abernethy, Trinity Journal

"This short book advances a large thesis in the massive debate about canon formation. . . . Though likely not the final word on the subject, this book still represents a meaningful contribution to the ongoing discussion regarding the development and arrangement of the Old Testament. Future explorations of these issues would do well to consult and engage Seitz's provocative claims."--Christopher Bechtel, Expository Times

"There are many positive aspects to Seitz's book, including the following: (1) He focuses on the final form of the text, which is certainly an advantage over older literary critical views. (2) He uses the canonical approach to its best advantage, and, while I do not agree with all that this view contends, it asks some important questions concerning the development of the text. And (3) he (and others) have shown fairly convincingly that the prophets seem to have been aware of each other's work. I also believe that Seitz is correct in his critique of what has become the traditional view of the development of the OT canon. . . . For the careful reader there is much profitable information that can be mined from [this book]."--Paul D. Wegner, Bulletin for Biblical Research

"A significant contribution to a largely overlooked subject. Seitz's work forces the reader to consider not just what we have in the biblical canon but how we have it. . . . Seitz's book suggests a key issue for the contemporary church to consider. He does an excellent job of pointing out, correctly in my opinion, that our view towards the order of the canon has implications for how we view the Bible. . . . [Seitz's] book is useful for the Church to be reminded of its heritage as found in the message of the Old Testament."--Adam Oliver Stokes, Koinonia

"Break[s] new ground. . . . Seitz's book has opened up new avenues for discussing canon formation and authority. Certain features of Seitz's model for canon formation are helpful and insightful. The work that he does to demonstrate that biblical authors were aware of other biblical material should inform any model of canon formation and authority. . . . Seitz's discussion regarding canon authority is entirely on the right track. . . . It seems unlikely that Seitz's work will resolve the debate over the canon, but it does provide directions for moving forward."--Joshua E. Williams, Southeastern Theological Review

"One immediate benefit of Seitz's work is that it furthers the discussion regarding the ordering of the biblical books in the Christian canon. . . . Seitz's discussion of the difference between two main understandings of 'canon' is also instructive. . . . One repeated theme of Seitz's analysis is the foundational role of the Old Testament canon. . . . This emphasis has the potential of shedding significant light on the nature of the development of the Christian canon as a whole. . . . As a brief yet substantive blueprint for further constructive work on the canon, this volume represents a valuable and engaging contribution."--Ched Spellman, Southwestern Journal of Theology

"Perhaps the most notable intellectual heir of [Brevard] Childs working today is Christopher Seitz. . . . The canonical approach merits the attention of any Christian serious about Scripture. Its acceptance of the basic unity of both testaments and careful attention to the witness both of the voices speaking from the page and of the canonical structure that binds them one to another bespeaks a properly Catholic form of scholarship fully cognizant of the incarnational nature of divine revelation. Its mindfulness of the community's role in developing the biblical witness would seem inseparable from the living Christian community that bears the biblical witness through time. . . . There is much profitable reading in [this volume]."--Daniel Muth, Living Church