The Good of Politics

A Biblical, Historical, and Contemporary Introduction 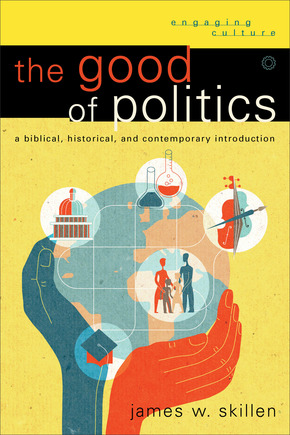 In this addition to the acclaimed Engaging Culture series, a highly respected author and Christian thinker offers a principled, biblical perspective on engaging political culture as part of one's calling.

James Skillen believes that constructive Christian engagement depends on the belief that those made in the image of God are created not only for family life, agriculture, education, science, industry, and the arts but also for building political communities, justly ordered for the common good. He argues that God made us to be royal stewards of public governance from the outset and that the biblical story of God's creation, judgment, and redemption of all things in Jesus Christ has everything to do with politics and government.

In this irenic, nonpartisan treatment of an oft-debated topic, Skillen critically assesses current political realities and helps readers view responsibility in the political arena as a crucial dimension of the Christian faith.

About the Series
The Engaging Culture series is designed to help Christians respond with theological discernment to our contemporary culture. Each volume explores particular cultural expressions, seeking to discover God's presence in the world and to involve readers in sympathetic dialogue and active discipleship.

Introduction
Part 1: The Biblical Drama
1. God's Kingdom Coming
2. The Revealing Image
3. Citizenship in the Kingdom
Part 2: Key Historical Developments
4. Constantine, Augustine, and the Fraught Future of "Christian"
Politics
5. From Augustine to the Splintering of Christendom
6. Nations, States, and Protestant Reformers
7. From the Reformation to Contemporary Engagement
Part 3: Engaging Politics Today
8. Viewpoint as Standpoint: Where Do We Begin?
9. Engagement for What Kind of Political Community?
10. Citizenship as Vocation
11. Family, Marriage, and Education
12. Economics and the Environment
13. Politics in One World
Index

"Skillen has made an important contribution to the growing body of serious evangelical political thought. This book is a masterful articulation of a profoundly Christian political philosophy--one developed in a sophisticated conversation with a broad range of the most important shapers of Western culture."

"The Good of Politics offers needed wisdom for an age tempted to despair about the possibility of anything good coming from politics. Judiciously tacking between empirical and normative issues, Skillen draws deeply from biblical sources and major streams of the Christian tradition in the service of a distinctively positive vision of civic responsibility for our common life. This accessible text by one of the most engaged Protestant political thinkers of his generation should find an important place in colleges, seminaries, and churches."

"In The Good of Politics, seasoned political thinker and practitioner James Skillen presents a full and compelling articulation of the integrally Christian vision of politics he has been pioneering in the United States for more than a generation. The book contains a fresh and inspiring statement of politics as caught up in the biblical drama of creation and kingdom and a highly insightful and critical reading of the complicated and often compromised history of Christian politics in the West and beyond. It offers an illuminating account of politics as a unique vocation to pursue justice and the common good and, on top of all that, illustrates what this concretely implies for constitutional reform, citizenship, family and marriage, education, economics and the environment and global affairs. The Good of Politics is a veritable tour de force of sustained Christian reflection on complex and contested territory where contemporary Christians are in great need of more wisdom."

"I have long believed that the dynamic, nonpartisan, and deeply Christian approach to politics embodied in the writings and witness of Jim Skillen offers an invaluable resource for our political moment. Here we have Skillen's political vision at its best. Biblically rooted and generous in spirit, he engages a staggering array of topics from the early church through today and invites us to see politics as a good and faithful endeavor that can and should promote justice for all. In this vigorous articulation of the God-given goodness of politics, Skillen's goal is to protect and promote the significance of the diverse nonpolitical responsibilities that make up most of life."

"Readers have come to appreciate the wisdom and insight that Skillen has displayed in his work over the years. This new book certainly lives up to our expectations. The Good of Politics is a biblically and historically rich primer on the political life for everyone persuaded that the claims of Christ extend to our calling as citizens."

"[Skillen] makes a careful case for the idea that rather than standing apart from the world, Christians are involved, on biblical terms, with the whole of the world, including its politics. . . . It will be useful to some of the more thoughtful and committed churches."

"[Skillen] takes issue with those who would argue that Jesus came to usher in a spiritual kingdom unrelated to the life of this world. He makes the case that Christianity is compatible with the practice of politics and that thinkers from St. Augustine to retired Duke theologian Stanley Hauerwas have it wrong when the sideline politics as separate from the life of faith."

"Skillen is a seasoned writer who has thought deeply about the contours of an authentically Christian understanding of politics. . . . He has for decades written incisively on the role of government, the character of justice, and the need for a principled pluralist arrangement in our cultural context. . . . We do need another such introduction [to politics], since responsible political engagement cannot rest upon neat and tidy once-for-all solutions, and because truth must be repackaged and presented afresh with each new generation. James Skillen has written a book that sensitizes us to these challenges, and for this we may be profoundly grateful."

"This volume offers an excellent introduction to Christian political engagement from a nonpartisan, deeply principled, and surprisingly hopeful position. In doing so Skillen demonstrates not only a masterful grasp of the American political landscape, but also a keen ability to navigate a host of topics--seamlessly moving from biblical and historical material to contemporary political challenges. Undoubtedly, readers will appreciate Skillen's clarity, sophistication, and knack for offering fresh and relevant insights. . . . [A] compelling, clear, and principled introduction to a Christian engagement with politics."

Journal of Church and State

"For decades, James Skillen has been thinking deeply and carefully about politics and public policy from an evangelical perspective. Despite the culture wars raging to his right and to his left, he has managed to maintain a degree of nuance and sanity that is all too rare among political commentators, Christian or otherwise. Needless to say, he has earned the right to be heard. . . . [The Good of Politics] can best be understood as a natural continuation of his life's work. . . . This book will help many as they seek to navigate the messiness of political engagement as followers of Jesus and citizens of his already-but-not-yet kingdom."

"Skillen argues that God made us to be royal stewards of public governance, helping readers see that their responsibility in the political arena is important to their faith."

"[Skillen] has woven a rich tapestry that owes much to the tradition of political reflection associated with the great Dutch statesman Abraham Kuyper. . . . Readers have come to appreciate the wisdom and insight that Skillen has displayed in his work over the years. This new book certainly lives up to our expectations. The Good of Politics is a biblically and historically rich primer on the political life for everyone persuaded that the claims of Christ extend to our calling as citizens."

"The Good of Politics offers an accessible, probing introduction to the issues and histories at play in a Christian approach to government. With a balance of nuance and narrative it deftly traces recurrent concerns without dwelling on them so that it can provide a sweeping review of the biblical and historical contexts that inform and compel our contemporary engagement. As such it commends itself to classrooms and churches as a prompt for group discussion and deeper study, cultural awareness and social activity. . . . Skillen has done well to express the importance of promoting social justice and operating in a patient and merciful way. The book recommends hopeful action for good in this world without promoting triumphalist naiveté about what we achieve apart from the return of Christ. As such this book serves as an excellent introduction to the issues at play when we consider a Christian's role in the political affairs of this world. . . . Skillen helps readers unlearn partisan politics and lazy alignment with talking points, inviting them instead into an examined, hopeful, and actively Christian political life."

"This volume is a substantial, learned, and positive development that brings light--rather than heat--to Christian engagement with political thought. . . . Skillen's vision of political thought grounds itself in a generous appropriation of the biblical witnesses and streams of the Christian tradition. His theological reflection respectfully engages other viewpoints, and so Skillen makes the development of his own argument a fitting vehicle for students in political science and political philosophy, as well as an occasional pastor or seminarian, to read and argue with in the generous spirit in which its author has offered it."

"A brave new book. . . . This feels like a magnum opus, a major work, stunning in its scope and rare in its discerning insight. The Good of Politics is as interesting and lucid as any book Skillen has released and offers a fresh articulation of the foundational vision of CPJ, the think-tank which is committed to finding uniquely Christian insights that illuminate true norms for governmental action. In various ways in this important book, Skillen helps us ponder what we mean by 'public justice' and the 'common good' and ponders essential questions such as how the state--which is God's good gift to us, not a bad thing--can use legitimate authority to help order our pluralistic political community. He helps us examine who is responsible for what, and in what way political-legal power is unique among other sorts of legitimate exercises of cultural power."

"[Skillen's] central theme--that the existence and role of governments do not merely reflect the fall but grow out of the original plan of creation and thus have a positive mandate to promote the common good--should prompt some good discussion. If Skillen has his way, it will also promote more frequent and more thoughtful participation in politics by Christians as well."

"[Skillen] bring[s] together the insights he has developed from his work in one coherent introductory volume. . . . Skillen's book gives a good account, as good as I have encountered, of why the comprehensive public justice thrust of reformational political science might help to give grit (as Calvin Seerveld might say) to humble efforts by Christians as they prepare themselves for political service in their own polities and regions. And they don't have to first become professional thinkers to do so, still less become theologians. . . . The Good of Politics is a call to repentance, a call to political repentance. It is not only written for Americans. But it seeks to encourage Christians wherever they live, in whatever polity they bear responsibility, to humbly reconsider their political responsibilities."

All of Life Redeemed Asia blog