The Future of Christian Learning

An Evangelical and Catholic Dialogue 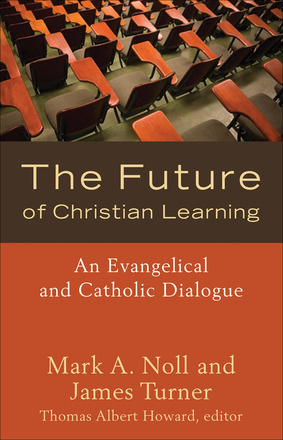 Numerous recent studies have broadly examined topics related to Christian higher education and the role of faith in scholarship, particularly in light of contemporary trends of secularization. This volume offers a unique approach to the subject with two prominent historians reflecting on their own and each other's traditions.

Evangelicals and Roman Catholics have been responsible for the establishment of many colleges and universities in America, but they have historically taken markedly different approaches to education and viewed one another's efforts with some suspicion. Recent years, however, have seen the development of a more cooperative tone. In this volume, Mark Noll and James Turner offer candid reassessments of the strengths and weaknesses of each tradition.

Taking two distinct but complementary approaches to the subject, Noll and Turner provide enlightening essays that reconsider the present state of Christian learning, what the two most influential sections of American Christianity have to offer one another, and how they might learn from each other. The two authors then respond to one another's essays.

The insightful dialogue of these two influential scholars will be of great interest to anyone involved in higher education or concerned with the role of Christian faith in the modern university.

"Professors Mark Noll and James Turner offer in this small book an illuminating dialogue on the nature of Christian education as well as what and how evangelicals and Catholics may learn from each other. The editor, Thomas Albert Howard, provides an outstanding review of the issues at stake and the importance of the Noll-Turner dialogue. The authors suggest a bold and ambitious vision, one that embodies what should be an uncontroversial premise: scholarship and teaching at a Christian institution of higher learning ought to take seriously the philosophical tapestry of ideas, principles, and beliefs on which the Christian faith rests and from which it offers an account of what is good, true, and beautiful. If evangelicals and Catholics, in true cooperation, can offer this vision to the secular academy, perhaps this will plant the seeds that may result in the ultimate fulfillment of Christ's prayer, 'Holy Father, keep them in thy name, which thou hast given me, that they may be one, even as we are one.'"--Francis J. Beckwith, Baylor University

"This volume is a sign of hope in the changing landscape of Catholic and evangelical relationships. And the dialogue it records is a model for many others that need to take place both in the academy and among the churches--candid, insightful, drawing on the wisdom of the past but looking to the future, marked by respect yet filled with hope. That such an exchange should be sponsored by a historic evangelical institution [Gordon College], while no longer surprising, does show how far we have come."--Timothy George, Beeson Divinity School, Samford University

"As they strive to contribute to the production of knowledge and reverse a 'scandalous' reputation for second-rate thinking, what can evangelical Christians learn from the experience of their American Catholic counterparts, who sponsor and staff 225 institutions of higher education in the United States? And how are Catholics usefully challenged by the evangelicals' insistence that 'Christian learning' be incorporated into research, teaching, and the (intentional or inadvertent) character formation that goes on in university settings? The Future of Christian Learning brings together in respectful but lively dialogue two prominent and influential historians of religion's various presences and absences in American higher education to consider these and related questions. The call-and-response format allows Professors Noll and Turner to put their considerable erudition and wisdom to lively and provocative use. They agree on much, but it is their disagreements that make this engaging and enjoyable volume a memorable chapter in a larger, vital conversation about the future of faith-based education."--R. Scott Appleby, University of Notre Dame

"Two formidable historians give generous and critical evaluations of the roles of Catholicism and Protestantism in American education. Living proof of what Catholics and Protestants can learn from each other, Noll and Turner are both personally and professionally invested in their subject. Their contributions--and Thomas Albert Howard's insightful introductory essay--not only explore, but model, the state of 'Christian learning.'"--Joshua Hochschild, Mount St. Mary's University

"Notre Dame historians Noll and Turner both contribute an essay to this slim and very useful volume, and each then responds to the other, their dialogue framed by Gordon College's Tal Howard. The larger context is evangelical-Catholic rapprochement; the specific focus is on what distinctively Christian scholarship might look like (Noll), or how the notion might be a will-o'-the wisp (Turner), though both scholars cover a lot of ground. The conversation is nuanced and mutually appreciative, but not without sharp differences."--John Wilson, Christianity Today

"This book is the published dialogue between evangelical historian Mark Noll and Catholic scholar James Turner, both of whom are noted for their publications on topics related to Christian higher education. . . . Noll and Turner were chosen not only for their expertise in their own respective branch of Christianity but also for their familiarity with each other's branch. . . . This volume will be of most interest to those who study Christian higher education in general, as well as to any who seek insight into Catholic and evangelical views of the intersection of Christianity and higher education."--Gerald Tiffin, Journal of Education and Christian Belief

"Noll's piece is the more historical of the two, tracing the trajectories of Catholics and evangelicals from their origin in the disagreements of the sixteenth century to their present remarkable rapprochement in America. . . . His account of the characteristic strengths and weaknesses of the two traditions is full of insights. . . . Turner's essay focuses more on the current situation in Christian higher education, offering a valuable primer for non-American readers. He is also more concerned about questions of distinctiveness, and how contemporary developments are likely to impact on Christian scholarship and teaching. His own insights are more theological, and he is very good on the Catholic perspectives on universal human reason and sacramentality. . . . This book is not only a signal example of truly 'receptive ecumenism,' it also takes us to the heart of the debate over the nature of Christian education."--Jeff Astley, Theological Book Review

"The book explores salient issues concerning Christianity and the life of the mind from the vantage of an evangelical Protestant and a Roman Catholic scholar."--Christian Scholar's Review

"This book's greatest strengths are also the elements that will be of greatest interest beyond the boundaries of Catholic and evangelical higher education. First, Noll and Turner explore the philosophies of education found among evangelicals and Catholics. Their incisive analyses will be helpful for anyone who encounters evangelical and Catholic students in the classroom. Second, Noll and Turner effectively model the sort of constructive, critical dialogue that crosses institutional borders and results in deeper understanding and, it is to be hoped, educational advances."--Caryn A. Reeder, Teaching Theology & Religion

"Two prominent historians, a Catholic and an evangelical Protestant, engage in an insightful exchange over what constitutes Christian learning. While the focus of their essays is education, the exchange highlights important differences in the understanding of being Christian. . . . The book offers valuable, thought-provoking insights into both what evangelicals and Catholics have in common and where they differ. . . . The book's greatest strength is the clear and honest way Noll and Turner explore the differences and implications of their two religious traditions. While unable to come to full agreement on a definition of Christian learning, their dialogue provides a good example of it."--J. David Fairbanks, Journal of Interdisciplinary Studies

"In The Future of Christian Learning, Noll and Turner engage in a dialogue--a frank and open talk--about the future of faith-based education. Their conversation includes their disagreements, as well as what they agree on, and what they learned from each other."--Liz Harter, South Bend Tribune