A Survey of Competing Theories

by: Thomas B. Fowler, Daniel Kuebler 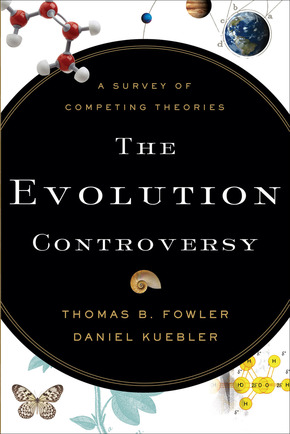 "The authors provide an invaluable service by clearing away many of the misrepresentations. . . . [They have] largely succeeded in their quest to present all of the views as objectively as possible."--Tim Challies, American Theological Inquiry Most books on the topic of evolution are one dimensional, attempting to sway readers to join a particular camp. Thomas Fowler and Daniel Kuebler, however, take a different approach to the subject in The Evolution Controversy. Instead of advocating a particular position, they present various sides of the debate about evolution. Not only do they trace evolution's development from the ancient Greeks to the present but they also summarize and critique four leading schools of thought: Neo-Darwinism, Creationism, Intelligent Design, and Meta-Darwinism. To help readers understand, learn, and master the content, the authors provide numerous diagrams, tables, and comparison charts. In addition, a technical glossary covers terms from abiogenesis to vestigial structures, and a helpful bibliography includes books, articles, Web sites, and organizations for further research.

This in-depth, balanced primer will appeal to professors, students, and general readers, and it will find its niche in biology, philosophy, and theology courses as well as interdisciplinary classes on science and religion.

"The Evolution Controversy takes a dispassionate, scrupulously honest look at the main schools of thought on the riveting question of how life originated. I recommend it to anyone who wants to understand the schools' strengths and weaknesses."--Michael J. Behe, professor of biological sciences, Lehigh University, and author of The Edge of Evolution: The Search for the Limits of Darwinism

"What we have here are two sound Catholic thinkers with the credentials necessary to treat the complex topic they have chosen. . . . With respect to most past discussions of evolution, The Evolution Controversy is a critical missing link. The authors demonstrate a masterful command of both scientific evidence and legitimate inference; they have no particular axe to grind; and they are able to explain the strengths and weaknesses of the various schools of thought with a dispassionate clarity which serves three vital purposes. First, it is a tour de force of education about origins theory. Second, it gives a wonderful example to all sides of how legitimate scientific inquiry ought to proceed. Third, it provides a much-needed model for teachers of biology who would like to do a more even-handed and, in fact, better job of presenting the science of origins. . . . Because Fowler and Kuebler are able to group their technical information around the precise points at issue in each theory, the reader is never lost in the details; rather he finds himself able to go far more deeply into the topic than before. The Evolution Controversy enables non-specialists, perhaps for the very first time, to gain a fascinating education."--Jeff Mirus, catholicculture.org

"The authors provide an invaluable service by clearing away many of the misrepresentations. . . . The authors have done the proponents of each school a service by forcing them, if necessary, to move beyond rhetoric and deal with the arguments. Many proponents of each school already acknowledge the weaknesses in their arguments that Fowler and Kuebler point out. This book can only help them as they seek either to strengthen those arguments or replace them with stronger ones. . . . The authors largely succeeded in their quest to present all of the views as objectively as possible. . . . Since the stated purpose of this volume is to evaluate the strengths and weaknesses of the four major schools in regard to their handling of the common observational data available to all, it succeeds rather well in reaching that goal."--Keith Mathison, ligonier.org

"The book is intended for those who are aware of the scientific controversies swirling about the theory of evolution and who seek an objective reference that will help them critically evaluate the myriad articles and books on the subject that appear every year. The book equips readers, whether they are students, church leaders, or the general public, with the background necessary to read and analyze other books and articles and come to their own informed conclusions. The broad range of information presented is of value in helping readers discern which schools have made a viable scientific base for their position. Fowler and Kuebler fully explore the subject, putting all important issues on the table."--SirReadaLot.org

"[The authors] carefully explain what each school of thought does and does not teach. . . . Since it is impossible to evaluate an idea if that idea is not accurately understood, the authors provide an invaluable service by clearing away many of the misrepresentations. . . . The authors have done the proponents of each school a service by forcing them, if necessary, to move beyond rhetoric and deal with the arguments. . . . The authors largely succeeded in their quest to present all of the views as objectively as possible. . . . Since the stated purpose of this volume is to evaluate the strengths and weaknesses of the four major schools in regard to their handling of the common observational data available to all, it succeeds rather well in reaching that goal."--Tim Challies, American Theological Inquiry

"A good place to start. . . . [This book] is a true overview of the issues of the evolution controversy."--Mark M. Wilkins, St. Anthony Messenger

"One might rightly be skeptical of the authors' claim to present without bias the strong and weak points of Neo-Darwinism, Creationism, Intelligent Design, and Meta-Darwinism, as most who venture to evaluate the claims of biological evolution do so from emotionally held religious/philosophical positions. Yet, [they] are fairly successful. . . . This book contains many helpful summarizing charts, a glossary and an extensive bibliography."--Duane Voskuil, Religious Studies Review

"One of the book's strengths is that it uses tables and illustrations to help the reader understand the varying positions and their strengths and weaknesses, then challenges the claims made by each perspective. I would recommend this book to anyone who wants to better understand the debates that center on evolution, both religious and otherwise; it contains a wealth of information on the major perspectives and their respective arguments in one volume. It also serves as a good starting point for further study on the subject."--Jeffrey G. Betcher, Ethics & Medicine