The End of Protestantism

Pursuing Unity in a Fragmented Church 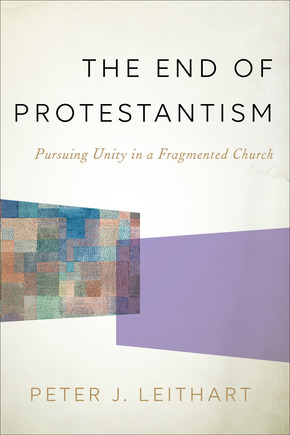 The Failure of Denominationalism and the Future of Christian Unity

One of the unforeseen results of the Reformation was the shattering fragmentation of the church. Protestant tribalism was and continues to be a major hindrance to any solution to Christian division and its cultural effects. In this book, influential thinker Peter Leithart critiques American denominationalism in the context of global and historic Christianity, calls for an end to Protestant tribalism, and presents a vision for the future church that transcends post-Reformation divisions.

Leithart offers pastors and churches a practical agenda, backed by theological arguments, for pursuing local unity now. Unity in the church will not be a matter of drawing all churches into a single, existing denomination, says Leithart. Returning to Catholicism or Orthodoxy is not the solution. But it is possible to move toward church unity without giving up our convictions about truth. This critique and defense of Protestantism urges readers to preserve and celebrate the central truths recovered in the Reformation while working to heal the wounds of the body of Christ.

"Leithart simply cannot write a dull book. He cannot because he has the courage and intellect to go to the heart of the matter. In this book he explores the coming unity we pray God intends for the church. He does so with his usual scholarship and wise judgments. One can only hope for this vision for the future of the church to be realized."

"I had given up trying to find--short of the Lord's return--an alternative to the tribalism of divisive denominationalism and the 'unity' efforts of mainstream ecumenism. Peter Leithart has convinced me that I gave up too easily. This groundbreaking book combines exciting ecclesiological explorations with some practical steps for moving forward prior to the eschaton."

"Leithart's provocative call for the death of Protestantism is likely to cause discomfort among those eager to hold on to their denominational particularities. But make no mistake: Leithart not only takes on his fellow Protestants; his postdenominational Christianity also chastises the sectarianism of Roman Catholicism and Orthodoxy. The urgent and fearless ecumenical proposal of The End of Protestantism holds out for the end of all tribal badges within the visible unity of a reformed Catholic church."

"The bold title of this book presages an equally daring theological argument: faithfulness to Christ and the gospel demands the visible unity of all Christians. The author sketches his capacious and informed vision of the demise of denominationalism and the birth of 'Reformational Catholicism.' One of the most creative theologians writing today, Leithart here offers an incisive and compelling volume urging the churches to become what Christ commands: the one body of the Lord. Highly recommended."

"This uncommonly courageous book goes where too few of us who love Christ's church dare to go. Leithart provides a nuanced, historically textured, and clear-eyed perspective (his 'short game') on our myriad Protestant divisions. He rightly believes that our constant divisions are a major factor in the present dissolution of the church in the West. In short, he believes that we have created walls where we should have built bridges. But his 'long game' is what gives me incredible hope. His insights have transformed my life as a teacher and practitioner of deep Christian unity. If we honestly desire to address the really big questions about Protestantism's tragic divisions, and then prayerfully consider how to respond in faith, hope, and love, we can find no better resource than The End of Protestantism. Be prepared to rethink everything you've known if you are a thoughtful Protestant."

"This is a book to read in community--whether in a book group, a Sunday school class, or a course in ecclesiology. Best of all would be to read it with an ecumenical gathering of Christian friends and colleagues. The conversation will surely be lively. Every reader is certain to find things that challenge and exasperate, as well as things that enlighten and delight. And when the discussion is over, maybe--just maybe--your community will be equipped to take a step or two toward more genuine catholicity."

"This interesting thought-exercise will be perfect for readers considering their place within the ecosystem of modern Christianity."

"The End of Protestantism is the long-awaited expansion of the provocative shorter remarks Leithart has made in this vein over the past few years. . . . He sketches an expansive biblical theology of church unity, ranging from the first words of Genesis through Israel's return from exile to the messianic kingdom of Christ. Anyone who knows his previous work will expect to find this sort of 'deep exegesis' from Leithart the preacher. More surprising, perhaps, are the other two modes in which he operates: visionary and journalist. As visionary, Leithart poses the question 'What should the future church look like?'. . . What Leithart the futurist sketched out, Leithart the journalist sees taking shape here and now in global Christianity. . . . [This book is a] profound [exercise] in the most salutary kind of Protestant self-critique. Ideally, today's evangelicals will have the grace to apply [it] judiciously to the tasks of reform."

"Leithart is as always provocative and learned. . . . Throughout, Leithart exhibits an attractive catholicity of spirit while at the same time making numerous pointed observations. While I demur from many of his proposals, it is hard to deny that many of his critical observations are well-made. . . . One has to acknowledge the power of Leithart's critique of the status quo."

"Leithart is not dull and has an enviable ease of scholarship across many disciplines. . . . [His] book is largely an exhortation to fellow Protestants, but he also has some strong words for those in the Roman Catholic and Orthodox traditions. . . . Leithart's candor with respect to areas all three traditions need to address is [as] refreshing as it is necessary. . . . There are many wise insights throughout this book. Leithart also does a terrific job illuminating little known histories. These out of the way reflections should give pause to all conscientious readers. We are listening to a man who loves the church and knows its history. . . . I am glad for thoughtful and happy warriors like Leithart. His cri de coeur for unity is attractive and the various ways he makes his case is valuable reading even if one disagrees with him over how much is achievable in this life."

"Christians of every denomination could agree with the basic thesis of this book. . . . The author makes some provocative suggestions and some stimulating proposals. That seems to be the point, to encourage Christians to consider how to move outside of denominationalism toward unity. This work is recommended for church leaders, pastors, parachurch ministers, theology students, and educated laypeople. It would be a great book to read and discuss together, integrating into the conversation people of a variety of denominational convictions."

"Leithart offers us both a vision of the post-denominational life of the people of God and a program on how to live into what church will be. . . . It strikes me that Leithart wrote an extraordinary timely book, exactly because it is so unfashionable. . . . Existing denominations are crumbling due to internal conflicts and again memberships that can no longer support the denominations' organizational structures. But new groupings that emerge are still governed by denominational principles, in that they desire visible unity and a common life that is a product of identifying with one another theologically or culturally. But what Leithart wants to show us is that in doing so we miss out on the heart of the gospel: to be reunited with those with whom we are estranged."

"The End of Protestantism is a very challenging exhortation that demands that conservative Protestant denominations and congregations reevaluate their ideas about what it means to be part of the church of Christ. As such, this book could become an effective means of bringing about greater unity among North American churches."

"The argument [is] engaging, the language fecund, and the theology provocative. . . . One of Leithart's unique gifts is the way he creatively sets biblical-theology conversation with sociological and anthropological sources. . . . Whether you buy Leithart's prescription or not, he's surely correct in drawing our attention to the ecclesial significance of what's happening outside our too-narrow, American imaginations. Beyond that, his sociologist's (and pastor's) eye for the local situation, leads to any number of important insights that pastors and theologians looking to preach and pastor their people well in the 21st century would do well to heed. . . . As always, Leithart has offered up a stimulating meditation worth attending for all those who care about the future of the local and the global church."

"This is one of the most engaging and thought-provoking books on current religious trends in America I have read. . . . [A] bold and courageous book. . . . If its basic premise is adopted by American Protestantism, the future of Christianity in the United States could be significantly different. . . . Of course, it remains to be seen whether Leithart's vision will be fulfilled, but there are many insightful reflections in his book to indicate that the American denominational system is in jeopardy. . . . This is a book that all Adventist church leaders and religion teachers should read and discuss. It is a perplexing prophetic analysis of the current state of American denominationalism, as well as a call to a better future."

"This volume is clearly thought-out and composed for pastors and parishioners alike. It is historical, theological, biblical, and pastoral. . . . It is a book well worth taking up, reading, wrestling with, and responding to. Get a copy and go for it!"

"Even though I may be unsure about some of Leithart's conclusions, I appreciate his thorough mastery of history and where we are today. This is an excellent resource on all things pertaining to unity. I don't know of anything like it. . . . Here is a man taking God at His word. He happily demolishes strongholds in the hope of something better. He imparts the vision and gives ways to run with it. His lodestar is unchanging: Christ prayed for unity. How can it be otherwise?"

"If you care about the future of the church--as a pastor, an involved layperson, a theologian--there is much here with which to wrestle, and much that you will no doubt find edifying. . . . I daresay than any follower of Jesus will, having read The End of Protestantism, find themselves recommitted to the Biblical vision of the church as a single family, and work locally and at all other levels toward that end."