The End of Apologetics

Christian Witness in a Postmodern Context 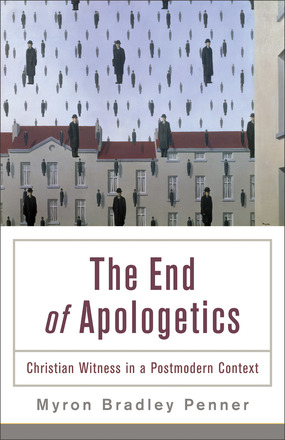 The modern apologetic enterprise, according to Myron Penner, is no longer valid. It tends toward an unbiblical and unchristian form of Christian witness and does not have the ability to attest truthfully to Christ in our postmodern context. In fact, Christians need an entirely new way of conceiving the apologetic task.

This provocative text critiques modern apologetic efforts and offers a concept of faithful Christian witness that is characterized by love and grounded in God's revelation. Penner seeks to reorient the discussion of Christian belief, change a well-entrenched vocabulary that no longer works, and contextualize the enterprise of apologetics for a postmodern generation.

"This book is quite accessible and passionately committed to Jesus Christ and his work in our world. Penner shows us that the modern age is ending and that the apologetics attached to that age cannot sustain lives of discipleship and witness to the gospel. But the real work of this book is to show us the way forward in faithfulness with a passion that makes us alive in Christ and fully present in the world for its redemption. This is an edifying work that builds us up in the hope and love of the gospel."

"Speaking as a Roman Catholic and something of a Thomist, I welcome Dr. Penner's meticulous and persuasive exposure of the kind of rationalistic apologetics that unwittingly make Christian faith quite unbelievable. A pleasure to read!"

"In this book Myron Penner challenges many of the intuitions and assumptions that have shaped traditional Christian thought and invites us to rethink them for the sake of the gospel. In doing so he offers a fresh perspective on the nature of Christian witness that has the potential to spark a revitalization of the church and its proclamation of the good news revealed in Jesus Christ."

"Penner's devastating critique of what passes for the 'defense' of Christianity in the evangelical worldview in today's increasingly hostile intellectual environment should be a rousing wake-up call for all seminary professors and students as well as pastors. Penner dissects the obsolescence, morbidity, and structural dysfunctionality of standard evangelical models of apologetics like a skilled forensic analyst. At the same time, he offers an alternative that makes eminent sense in present-day culture while coming across as highly credible from both a philosophical and biblical standpoint."

"'Is the cross, then, an argument?' That pointed question from Nietzsche, with which this work begins, displays an insight into the gospel that its rationalist Christian defenders never attain, as Penner shows with sharp and devastating clarity. Joining his voice to the prophetic words of Kierkegaard, Penner calls us to the logos of the cross, to that form of reason whose beginning is crucifixion and whose end is the humble service of the neighbor. This book makes a crucial intervention: for those who have knelt too long before the idol of apologetics or been wounded by it, their healing can begin here."

"What is the 'end' of apologetics--defeat or conversion? Myron B. Penner's provocative critique of the 'rhetorical violence' of the 'apologetics industry' needs to be heard especially by apologists, as does his radically alternative model of 'edifying prophetic witness'--a witness that calls for conversation rather than debate and for Christians to embody the truth they profess in their lives rather than merely prove propositions through their arguments."

Robert MacSwain, assistant professor of theology and Christian ethics, Sewanee: The University of the South

"Myron Bradley Penner has written that rarest of books: the book that needs to be written. He exposes the fatal flaws of modern Christian apologetics, putting words to the unease many Christian theologians and philosophers have long felt about the apologetic enterprise. But the importance of Penner's book is not merely in its critique of apologetics; even better, it lights a way forward for authentic Christian witness in a postmodern age."

Michael W. Pahl, author of The Beginning and the End and From Resurrection to New Creation

"This well-researched, lucidly written, irenic work demonstrates that postmodernism, far from being a gateway to relativism, atheism, and the death of the church, offers resources for furthering the gospel and strengthening discipleship. All reason-based apologists need to wrestle with it."

"Penner's book will undoubtedly provoke many who work in apologetics, evangelism, and missiology. First, Penner's text provides a creative way to conceive of apologetics in a postmodern context. The fruitful engagement with Kierkegaard can only help reorient what apologetics is. To be sure, more work is necessary here, but Penner's reframing of apologetics in light of modernity's questionable past and postmodernity's confusing present is certainly welcomed. Second, Penner's research dovetails nicely with proposals being currently done in religious epistemology. No longer does the church need to take a back seat to modern or postmodern 'experts' (geniuses) but can engage creatively, if not evangelistically, with all newcomers in the struggles for truth. Penner's arguments allow the church to wrestle with the kinds of faithful witness and vocabulary that will sustain discipleship over time."

"Penner's impassioned critique should be heard and weighed. . . . I am grateful for Penner's encouragement to think again about faithful Christian witness. . . . Much that Penner writes . . . is helpful and thought-provoking."

"This is an excellent antidote to a certain style of Christian apologetic. . . . Penner has read widely in contemporary apologetics. . . . A stimulating book."