The Dove and the Rose 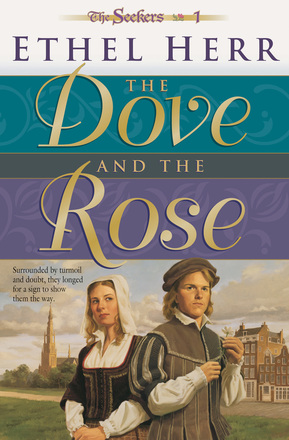 Caught in the sweeping changes connected with the European Reformation and Renaissance, sixteenth-century Holland under the reluctant leadership of William of Orange rebelled against the strong control of Spain's King Philip. The war that ensued to squelch the rebellion and exterminate religious heresy at any cost sets the background for Ethel Herr's compelling series, THE SEEKERS.

In The Dove and the Rose, two young people are wrenched apart by the struggles of their parents. Pieter-Lucas is banished from his home for refusing to abide by his father's commitment to the Beggars, an extreme wing of Calvinism. Aletta Engelshofen is not allowed by her father to see Pieter for fear of any association with the Beggars. While they meet in secret, Aletta promises her love to Pieter and that she will wait for him until the trouble passes.

Swirling tides of emerging religious, political, cultural, and personal independence clash in this excellent first book in THE SEEKERS.