The Development of Greek and the New Testament 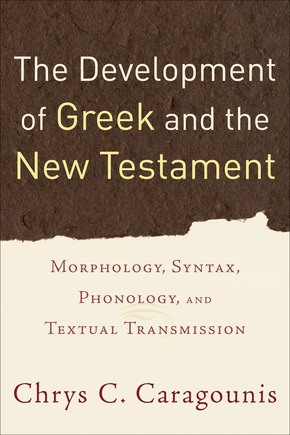 "Deeply learned. . . . The volume is erudite, passionate, and wide-ranging. . . . Agree or disagree with the author, the volume will become a standard reference."--Michael Holmes, Religious Studies Review

The Development of Greek and the New Testament makes a sustained argument that the history of the Greek language is vitally relevant to New Testament interpretation. Chrys Caragounis provides a wealth of historical information not otherwise readily available to students of New Testament Greek and sheds new light on many New Testament passages.

This volume serves first of all as an extensive reference resource. Its footnotes, lists, tables, and bibliographies present a wealth of otherwise inaccessible information. Most notably, Caragounis includes extensive information regarding morphology, syntax, phonology, and textual transmission, all of which have crucial significance for New Testament interpretation. Second, the book presents a comprehensive case for a "diachronic" approach--by looking at the whole history of the Greek language, readers can better understand usages found in the pages of the New Testament. Caragounis provocatively argues that contemporary scientific-linguistic theory is less helpful than a broad and deep working knowledge of the language as spoken, written, and understood across the centuries. Third, the book serves as a valuable sourcebook for exegesis. Caragounis shows how his theoretical convictions about the importance of the whole history of the Greek language bear fruit in the concrete interpretation of particular New Testament passages.

This groundbreaking work is sure to spark lively debate. It will be of interest to scholars and students in the areas of New Testament exegesis, New Testament Greek, and New Testament text criticism.

"Chrys Caragounis is in an enviably unique position to write a book on the history of the Greek language and the New Testament's place in that story because he is an expert linguist and grammarian highly competent in and familiar with contemporary biblical scholarship as well as having Greek as his mother tongue. He writes with erudition, perceptiveness, and passion. This highly readable survey is a veritable mine of information and detailed scholarship and is to be highly recommended to all scholars of the Greek New Testament."--J. K. Elliott, professor of New Testament textual criticism, University of Leeds

"The Development of Greek and the New Testament is a magisterial work that must be on the bookshelf of every scholar working with the Greek language. It is a treasure trove of information on all aspects of the historical development of Greek (the evidence presented on Phrynichos, Moiris, and the Atticistic reaction, e.g., is invaluable). Especially significant is the attention paid to Byzantine-Medieval Greek (AD 600-1500) and its place in the development of Neohellenic. While Caragounis has his own views on a number of issues, his approach is in no way idiosyncratic, building as it does on the foundational work of Hatzidakis and Jannaris."--James W. Voelz, professor of exegetical theology, Concordia Seminary

"I have great sympathy with the concerns of Professor Caragounis and admiration for his extensive reading of the Greek literature of all ages and the perspectives he derives therefrom. This impressive work can open the eyes of New Testament scholars to important but neglected aspects of the language of the New Testament and broaden their linguistic horizons."--Peter W. van der Horst, professor of New Testament, University of Utrecht

"Caragounis proposes that earlier and later forms of Greek are essential to a proper understanding of New Testament Greek. He rejects the current scholarly consensus of synchronic priority in favor of diachronic, holistic study of Greek as a unified language. As a result, he proposes alternative interpretations of selected New Testament passages and textual problems. The thesis that Neohellenic (modern Greek) is essential for understanding the language of the New Testament is controversial, and many of us may be skeptical of such claims, but I am glad to see this work made available in an affordable edition so that its proposals may be more readily evaluated."--Rodney J. Decker, associate professor of New Testament, Baptist Bible Seminary

"Deeply learned. . . . The volume is erudite, passionate, and wide-ranging. . . . Agree or disagree with the author, the volume will become a standard reference."--Michael Holmes, Religious Studies Review

"Not many scholars dare write substantial monographs about the Greek language, apart from Greek grammars which generally copy most of their material from their predecessors. Thus the appearance of Caragounis's magisterial opus magnum is a welcome addition to the literature about the Greek language. Since Caragounis is not only a scholar of Greek but also a Greek scholar who speaks contemporary (Neohellenic) Greek, he is uniquely qualified to explore and explain the Greek language of a bygone era."--Eckhard J. Schnabel, Trinity Journal

"This lengthy and detailed book argues for two main points: (1) the unity and continuity of the Greek language throughout its long history, and (2) the importance of later Greek for NT interpretation. It is a book of prodigious industry and passionate conviction, and Caragounis is largely successful in making these two general points, but in the process he gives plenty of specifics for NT linguists and exegetes to ponder and then agree or disagree with. . . . There is much to be commended in these pages. . . . The book is beautifully produced and well served with sixty pages of abbreviations and bibliography and five types of indexing running to ninety pages."--Buist M. Fanning, Bulletin for Biblical Research

"[A] detailed and well-researched work. . . . Caragounis encourages students of the NT to develop a healthy, broader, historical sense for the Greek language both forwards and backwards beyond the first century. He also brings us in contact with the work of inaccessible or overlooked modern Greek scholars, opening some important avenues for discussion in this valuable contribution to NT scholarship."--J. William Johnston, Journal of the Evangelical Theological Society