The Dead Whisper On 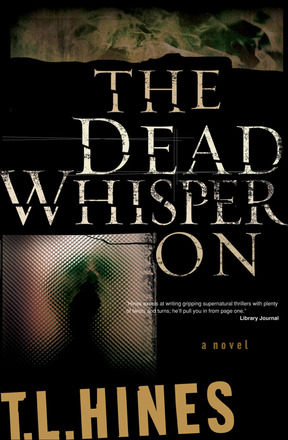 Would You Run Into a Burning Building?

Once a proud Butte, Montana, miner who daily risked her life setting explosives, she's now a garbage collector in her dying hometown.

Her beloved father is dead and she doesn't speak with her mom.

Canada Mac is alone. Longing for the past. Dreaming of making a difference.

Until one night when her father's voice speaks to her from the shadows. The dead, it seems, have messages they hunger to share with the world--warnings of impending disasters and grave danger. Of cities doomed to burn.

But they need Canada's help.

"Candace 'Canada' MacHugh is sleepwalking through life. Estranged from her mother, she has never fully recovered from her father's death 11 years ago.

"Canada dropped out of college to come home and take of her sick father. Cancer, it seems, is often a side effect of a lifetime spent underground. Undeterred by her father's illness, Canada followed his footsteps right onto the blast crew of the local copper mine. When the mines went out of business and she lost her job, Canada's options were limited.

"A job as a trash collector with the butte sanitation department seemed to be the perfect answer. Her duties are physically, but not mentally, taxing, allowing her to pass numbly through each day.

"Bud MacHugh promised his daughter that he would find a way to contact her from beyond the grave. Intellectually, Canada knows this is impossible, but for 11 years, she has sought some sign of his presence. That's why she is not all surprised to hear his voice speak to her from the shadows around her trash truck on a hot summer afternoon.

"It seems that Bud has an offer for Canada, a chance for them to work together again. Bud tells her of a network of 'shadows' (souls trapped between this world and the next) and people, working to make the world a better place. Canada signs on tentatively and is sent on a training mission.

"Canada's appointment awakens an ancient being whose purpose is to stop her at any cost. As she boards a plane for her first assignment, Keros is on her trail.

"Canada arrives in St. Louis, finding that her new employers have given her hardly any information regarding the nature of her mission. Lisa, the operative assigned to train Canada, takes her to the scene of an apartment explosion just moments before the building blows into smithereens. Canada, unable to sit idly by, runs into the burning building and saves a man--a man who, according to Lisa, caused the explosion by cooking crystal meth in his apartment.

"Canada is more confused than ever by her new job. If she isn't supposed to prevent disasters, how is she going to change the world for the better? According to Lisa, their job on this assignment is to provide the media with information regarding the hazards of manufacturing crystal meth so that the public will be aware of the danger lurking unseen in their midst.

"Keros tracks Canada through the shadow network, bent on catching her. Canada can't remain in one place more than a few hours before Keros finds her. As she flees from city to city, she barely grasps the details of each new mission before her nemesis turns up and forces her to run again.

"When Canada and Keros finally meet, Canada learns that all is not as it seems. Why, for example, is the network so determined to keep Canada out of Butte? Why is Butte suddenly under CDC quarantine? What really happened between her mother and her father?

"To find the answers, Canada must operate outside the network. She must go against her father's voice, following her own instincts right back to her hometown. The showdown, it seems, must take place in Butte.

"I first discovered author T. L. Hines while I read Waking Lazarus about a year ago. In his first novel, Hines proved to be a gripping storyteller. I stayed up far too late because I couldn't stop turning the pages--I just had to know!

"His sophomore effort does not disappoint. The Dead Whisper On is an engaging suspense thriller. Hines doles out the details carefully, allowing his readers to piece together the big picture along with Canada.

"Canada is sure her task is bigger than she can manage. It is only when she is able to put her own issues aside and she realizes her potential, rising to the occasion and leading her fellow townspeople safely through their darkest hour.

"The truth, once fully revealed, is a wonderful statement on the redeeming nature of home and the darkness that is present in each of us in these troubled times."
--Heather Holly-Hall, Times News (Burlington, NC), October 19, 2008