The Citadel and the Lamb 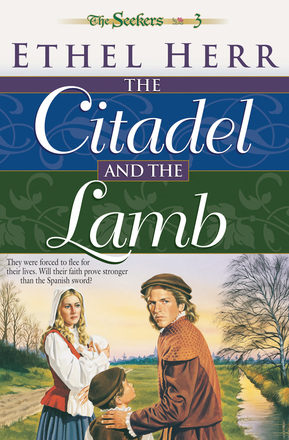 In this third story, the Dutch revolt against the occupation and religious oppression of Spain moves into full engagement. Pieter-Lucas van den Garde continues to run messages for Willem of Orange. In the midst of the uncertainties of war, his wife Aletta gives birth to their second child. Then Aletta discovers that the baby girl has a deformity. Concerned for the safety of his family, Pieter takes them to the fortified city of Leyden, where he had once dreamed of studying art under its master artists.

In Leyden, the only painter Pieter-Lucas finds is Joris, an innkeeper who for fear of persecution will not admit to being a painter of that his true identity is Jewish. But Joris' son's gift as an artist exposes them to danger, and his wife's discovery of a true Christian faith is very disturbing to him. When the Spaniards lay siege to Leyden, all their lives are in danger and intertwined, and Pieter-Lucas' arrest as a spy pushed Aletta's fears to the overwhelming point. In the blackest night, will faith prove to be a citadel stronger than the sword.