The Church according to Paul

Rediscovering the Community Conformed to Christ 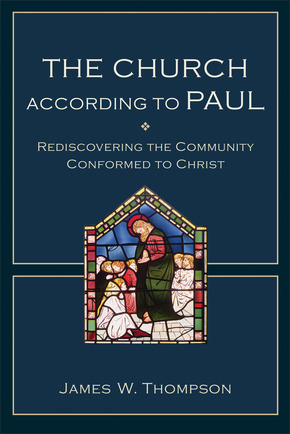 Amid conflicting ideas about what the church should be and do in a post-Christian climate, the missing voice is that of Paul. The New Testament's most prolific church planter, Paul faced diverse challenges as he worked to form congregations. Leading biblical scholar James Thompson examines Paul's ministry of planting and nurturing churches in the pre-Christian world to offer guidance for the contemporary church. The church today, as then, must define itself and its mission among people who have been shaped by other experiences of community. Thompson shows that Paul offers an unprecedented vision of the community that is being conformed to the image of Christ. He also addresses contemporary (mis)understandings of words like missional, megachurch, and formation.

Contents
Introduction: Reimagining the Church
1. A Community Like No Other: The Key Themes--from Paul's First Letter
2. Not Just Any Body: The Church and Paul's Corporate Christology
3. The Church Made Visible: Baptism and the Lord's Supper in 1 Corinthians, Galatians, and Romans
4. Spiritual Formation Is Corporate Formation: The Transformative Church in Romans and 2 Corinthians
5. Justification Is about Unification: The Death of Jesus and the People of God in Romans and Galatians
6. "Missional" May Not Mean What You Think: Evangelism and Social Action according to Paul
7. The Universal Church Is the Local Church: Koinōnia according to Paul
8. Discovering the Real Megachurch: Cosmic Church and House Church in the Disputed Letters
9. Leadership Like No Other for a Community Like No Other: Authority and Ministry in the Undisputed Letters
Conclusion: The Church after Christendom
Indexes

"Always with one foot planted firmly in the academy and the other in the church, James Thompson has given us a highly insightful, theologically rich, and timely study of the apostle Paul's view of the church--one of the best Pauline ecclesiologies in print. Thompson argues compellingly that Paul's first-century vision of the church as a distinctive community speaks clearly to the twenty-first century. This excellent volume should be studied not only by students of Paul but also by all who are (rightly) concerned about the identity and mission of the church today."

"Diagnoses of the church's problems and prescriptions for its flourishing abound. As James Thompson wisely observes, however, most contemporary discussion of the church shows little evidence of engagement with the letters of Paul. In this careful volume, Thompson studies the church in Paul's words and his work, in the hope that Paul's rich wisdom might have its rightful place in contemporary Christian reflection."

"In this stunning and much-needed study of Pauline ecclesiology, Thompson offers far more than careful historical scholarship concerning the apostle's understanding of church. While his analysis provides a first-class treatment of Paul's letters as first-century documents, he also rediscovers ideas that speak to the contemporary church about its mission and identity in the twenty-first century. The result of Thompson's work is that rare learned book that is grounded in sure-footed and careful biblical scholarship yet speaks powerfully to the church today about its role and outreach to modern society. This is a scintillating achievement that is vital for the church as it seeks to understand its continuing role in the wider secular culture."

"According to Thompson, the crisis facing the Western church is not its survival but rediscovering its purpose. Probing the theological depths of Paul, this book offers a model for the contemporary church that is deeply challenging to the 'emerging' and 'missional' church and to those who see the church as a political action group, for example. Rather, chosen to participate in the destiny of the crucified Lord, the church lives for others. For Paul, the church, as Thompson argues, is characterized by holiness and as an outpost of the world to come--by bringing together different cultures in one community that is both local and ecumenically engaged. This is essential reading for those seeking a model for the contemporary church that is scripturally informed."

"James Thompson applies his exegetical skill, literary sensitivity, and theological acumen to the topic of Paul and the church. He corrects those who emphasize Paul's soteriology but neglect his ecclesiology. Thompson sets that ecclesiology in the context of Paul's theology. Ecclesiology and Christology are thus inseparable.'"

"From the seasoned hand of James Thompson, who has already authored excellent books on pastoral ministry and moral formation in the Pauline letters, comes this lucid, timely, and insightful study, The Church according to Paul. Thompson deftly engages the Pauline witness and offers challenging reflections, in light of Paul's writings, about the contemporary ecclesiological context in Europe and North America. For Western Christians attempting to embody a biblically informed vision of the church in a post-Christian culture, there is perhaps no better resource available to stimulate fruitful reflection on Paul's ecclesiology than this gem of a book."

2015 Book of the Year Award, Academy of Parish Clergy

"This smart investigation of Pauline ecclesiology contends that today's would-be reformers can learn much from the apostle's views. . . . Because Paul's letters--both undisputed and disputed--devote themselves so thoroughly to the task of forming distinctive communities, James Thompson's analysis interacts extensively with many prominent Pauline themes."

"[Thompson] has given a full and 'Paul-packed' exposition of the theme [of the church] in Pauls' letters, and one can easily discern his enthusiasm in writing the book. . . . I would encourage you, the reader, to obtain this book, read it with care and, I hope, with pleasure, and you may reap a rich reward for your studious efforts."

"The Church according to Paul is a good starting point for anyone interested in engaging with Paul's ecclesiology. The style is easy to engage with, the regular 'then and now' conclusions are thoughtful and provoking, and the book offers a 17-page bibliography to enhance further study. . . . [A] useful book that should be enjoyed by students and pastors alike."

"Thompson's monograph is biblically and practically grounded research that attempts to answer a specific hermeneutical question: What can we learn from Paul on communal identity? Drawing on Paul, the author offers an ecclesiological model for the contemporary church. . . . This book will definitely find a wide readership among practitioners and students of theology."

"Thompson attempts something that the Apostle Paul never did--to summarize Pauline ecclesiology in a thematic way, which is no small task. The author does a masterful job in reintroducing Paul's voice to contemporary Western society. Thompson's conclusions, however, call for a sequel in that only so much can be included in one book. . . . We delight in this helpful volume and look forward to the sequel."

"In this important contribution, Thompson addresses how Paul envisioned the church. . . . This volume is a welcome contribution to both the interpretation of Paul and the relevance of Paul for current ecclesiological practice. The study could be used in a class on Pauline theology or a class on ecclesiology."

"Thompson's work offers an exegetically rigorous account of Paul's ecclesiology. . . . The approach taken by Thompson does not just note particular proof-texts regarding the church from various places in the NT but rather delves into the contextual realities of Paul's epistles and thinks through how Paul's theology affects his ecclesiology. Churches that are much more focused on pragmatic issues without giving proper attention to the ontological and theological realities that undergird ecclesiology will be helped in this regard. Another helpful feature of this work is the way in which the author links ecclesiology tightly with Christology. . . . Thompson has done a remarkable job in reminding us of our need for a robust ecclesiology."

"A rich and substantial study of Pauline ecclesiology. . . . This is a thoughtful and prophetic call for a renewed understanding of the church that is truly communal and reflects the heart of the Scriptures and the best of Christian tradition."

"The author has made use of a wide range of comparative material to illumine Pauline texts. That includes the Old Testament, Jewish texts after the Old Testament, and Greco-Roman literature. The thoroughness of the work is commendable. . . . Readers can gain much from this book. The author sets forth a robust vision of the church in conversation with the letters of Paul. In the book's conclusion he makes thoughtful, informed connections between the ecclesiology of Paul and possible models for the church today. . . . Well written and accessible, the book presents challenges to the church of today, based on fine research and argumentation."

"The Church according to Paul is a vital read for elders, preachers, and teachers. . . . Students of Paul are indebted to the careful reading of Paul's ecclesiology that Thompson provides. If church leaders want to rise above ecclesiologies modeled after values of consumerism and individualism and hear the authoritative voice of Paul, Thompson's work will be a welcome guide."

"The Church according to Paul . . . examines the apostle's ministry of planting churches in the pre-Christian era, using his trials and triumphs to guide church planters in these post-Christian times."

"Thompson's work is challenging but accessible to less technically minded readers, as it addresses contemporary questions. . . . This work will appeal to scholars interested in Paul's understanding of the church and to anyone curious about how Paul's letters contribute to a modern conversation on ecclesiology."