A History of Protestant Higher Education in America 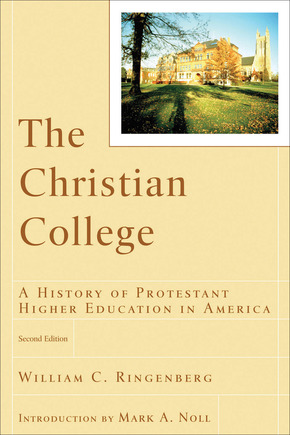 "A valuable resource. Ringenberg's update, like his earlier work, is comprehensive and thorough, making it essential for anyone who wants an accurate picture of the many dimensions of this growing part of American higher education."--George Marsden, Dame

When it first appeared in 1984 The Christian College was the first modern comprehensive history of Protestant higher education in America. Now this second edition updates the history, featuring a new chapter on the developments of the past two decades, a major introduction by Mark Noll, a new preface and epilogue, and a series of instructive appendixes.

"A well-researched and informative guide to the institutional history of Protestant liberal arts education in America. . . . It should become a widely read resource on the campuses of the Christian colleges themselves, and it should serve as a valuable fount of information for the general study of American higher education."--Mark A. Noll, coauthor, Is the Reformation Over?

"The updated version of William Ringenberg's classic, The Christian College, is a valuable resource. Ringenberg notes that Christian colleges are in a stronger position with respect to American society than they have been since the 1930s. In the considerable literature commenting on this flourishing in recent decades, works tend to deal either in broad generalities or in case studies that, while insightful, are inherently limited in scope. Ringenberg's update, like his earlier work, is comprehensive and thorough, making it essential for anyone who wants an accurate picture of the many dimensions of this growing part of American higher education."--George Marsden, Francis A. McAnaney Professor of History, University of Notre Dame; author of The Soul of the American University and The Outrageous Idea of Christian Scholarship

"Why has enrollment at intentionally Christian colleges grown two and one-half times faster over the past fifteen years than it has at all 1,600 four-year independent colleges? Many of the reasons for this growth in numbers and in quality are carefully laid out in this book. William Ringenberg's history is a 'must read' for leaders in our movement and a 'should read' for all students of higher learning. No one understands the story better."--Robert Andringa, president, Council for Christian Colleges & Universities

"Over twenty years ago, William Ringenberg wrote the book that became a standard history of Christian higher education. Now, in this revised and expanded edition, he makes a great book even better. His new chapter--'On to the Twenty-first Century'--is worth the price of the book and more."--Richard Hughes, distinguished professor of religion, Messiah College

"All those interested in Christian higher education will be glad to know that William Ringenberg has updated and improved The Christian College in significant ways. In a decade in which Protestant higher education, especially among evangelical institutions, is enjoying a resurgence, this book will assist scholars in gaining a deeper understanding of this important phenomenon."--Michael Beaty, professor and chair of philosophy, Baylor University

"The [previous edition] filled a void in providing a very useful history of Christian colleges in the United States. Even though many books have been published in the last twenty-two years on various aspects of the subject, the revised edition is even more useful today. . . . Included in the book is a very insightful introduction by Notre Dame historian Mark Noll. . . . The result is a valuable study, which at least for its description of the 20th century is not duplicated elsewhere. Ringenberg writes as an insider who has viewed much of this history firsthand. . . . For those who are part of Christian colleges and wish to understand them better, the reading of The Christian College by William C. Ringenberg is essential."--Stanley D. Anderson, Christian Scholar's Review

"[The book includes] an excellent introduction by Mark Noll. . . . Perhaps the most important part of the book for the contemporary reader is Ringenberg's analysis of the secularization of Christian colleges. . . . Ringenberg's discussion of the sources and the process of secularization in these once-orthodox colleges is critically important for anyone concerned about the future of Christian higher education in the twenty-first century. . . . This book provides guidance in many ways to those who care about Christian colleges."--Donald D. Schmeltekopf, Journal of Church and State