The Character of Christian Scripture

The Significance of a Two-Testament Bible 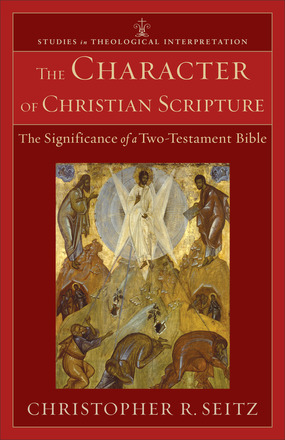 "In this learned, astute, and graceful study, Seitz reflects on the significance of the two-testament form of the Bible for understanding the character of Christian Scripture. A commanding account of the matter from a master of biblical theology."--John Webster, King's College, Aberdeen
Christopher Seitz illuminates the two-testament character of Scripture and examines its significance for the contemporary church. He explicates the canonical interpretation project of Brevard Childs, interacts critically with current interest in the New Testament's use of the Old Testament, and addresses an issue of perennial concern: how to hear both testaments as Christian witness. This volume will be useful for biblical studies scholars and grad students, and will be utilized by professors and students in biblical studies, theological interpretation of Scripture, and hermeneutics courses.

"In this learned, astute, and graceful study, Seitz reflects on the significance of the two-testament form of the Bible for understanding the character of Christian Scripture. It is a commanding account of the matter from a master of biblical theology."

"In The Character of Christian Scripture, Seitz carries forward the work of Brevard Childs and his canonical approach to the theological interpretation of Scripture. In contrast to some recent hermeneutical proposals that read the Old Testament in a restricted way only through the lens of the New Testament, Seitz argues that the rich, diverse, and unique theological resources of the Old Testament should be allowed their own integrity in dialogue with the witness of the New Testament. Seitz rightly argues that the Christian Bible is unique in its bi-testamentality and thus requires a correspondingly unique theological hermeneutic as it testifies to the Triune God of Christian faith."

"What does it mean for the Christian Bible to have two testaments? Christopher Seitz, the foremost proponent of the canonical approach today, demonstrates how this deceptively simple question leads us to the heart of the challenge of reading the Bible theologically. Incisive in its criticisms, sound in its proposals, and ecclesial in its concerns, this is an exhilarating contribution to biblical theology. Required reading for anyone trying to think clearly about how to read Scripture in and for the church."

"Seitz has long been blazing an exciting trail in thinking through the theological reality of a single, two-testament Bible. Here--in vigorous, challenging, and learned argumentation--he brings his reflections to a magnificent maturity and shows a way beyond the too-facile formulae of relating Old and New that have ultimately stripped the Old Testament of its power and substance as God's living Word. Among the volume's many gifts is Seitz's convincing reassessment of the character of the early church's 'rule of faith' in reading Israel's Scriptures and the emerging New Testament--a key demonstration of how the peculiarity of maintaining a Bible of two distinct witnesses held 'in accord' can open up and guard a complexity and richness of Scriptural meaning. Seitz's rigorous book constitutes a major contribution to both theological and practical hermeneutics that should fruitfully reorient the church's reading of the Bible."

"Beginning with the Bible's unique character as a two-testament book, Seitz traces a theocentric path through issues of historicity, the final form of the canon, the providential location of the church's exegetical task, the distinctiveness of the Old Testament's voice, the rule of faith, contemporary Anglican debates, and more. A work of maturity and grace, this is Seitz's best book yet--necessary reading both for its answers and, equally important, its questions."

"Since Christianity must primarily be regarded as a particular interpretation of the Old Testament (Luke 24:25-27), Seitz's essays are welcome, timely, and erudite. They deeply and faithfully recognize the significance of the Old Testament--first alone and then as part of a two-Testament witness--as the hermeneutical problem of Christian theology. . . . [This book] will help frame the discussion for years to come."

"[A] provocative book. . . . These essays are timely, well informed, and motivated by a deep religious faith and an evident love for Scripture. . . . The essays go far toward establishing the point that Childs's canonical method is suppler and subtler than most of his critics have recognized."

"Setiz's ability to set up his arguments is masterful and is the real strength of this book. His questions are penetrating and invariably lead to a more nuanced line of questioning and theological implications. . . . At the very least, Seitz's work should serve as a serious caution against any hermeneutic that denies the OT its status as Christian in its own right."

"Seitz asks whether both Old and New Testaments witness to Christ in their own distinct way[s]. . . . Seitz makes a convincing case that how one lands on this issue affects how one uses Scripture to address contemporary ethical concerns. . . . The Character of Christian Scripture successfully brings to light a root question fueling contemporary debates surrounding our canon. . . . Seitz's book is a contribution to the continued refinement of the canonical approach and an important voice to consider when formulating contemporary doctrines of Scripture."

"This thorough and closely reasoned study probes what it calls the 'character' of the Christian Scriptures. Seitz . . . wants to properly understand the meaning of the fact that the Christian Scriptures contain both the Old and the New Testaments. . . . Seitz's thoughtful and nuanced discussion wrestles with how Christians now must read the Old Testament from the vantage point of Christian faith but without diminishing its intrinsic scriptural authority. This is an important theological and pastoral question, particularly now in the light of the maturing Jewish-Christian dialogue."

"Biblical theology is an important topic for preachers as it addresses how the Bible fits together and how any particular text we might preach fits in the storyline of the whole Bible. Getting this trajectory of the Bible story right is what helps us keep our interpretation on the right track. . . . Christopher Seitz . . . has been a key voice, and his The Character of Christian Scripture . . . is a significant contribution."

"This is an important examination of the Bible's character, deserving careful reading in its own right and also so that those whose work Seitz questions can better contextualize their approaches by explaining their positions. . . . The essay on the canonical approach . . . is the best-updated summary of the contours of the approach in print."

"Carrying forward the prodigious efforts of Brevard Childs, [Seitz] has given a sterling treatment of the subject of the Bible as a two-Testament canon testifying to one God and one Lord Jesus Christ. . . . I heartily commend this book to its readers. . . . By diligent and even repeated readings, much help can be afforded--intellectually, historically, and spiritually."

"I . . . find much that is commendable in Seitz's proposal. First, he correctly avoids an overemphasis on historical reconstruction and history-of-religions approaches to the text, which are too often merely conjectural. Second, it is certainly enriching to focus on the final form of the text, not simply in individual writings but also in broader canonical relationships. . . .Third, I am in substantial agreement that the OT makes its own contribution to Christian theology, in its own plain sense and idiom, which is not limited to what the NT makes of it. . . . Fourth, I appreciate the emphasis on retrieving pre-critical scriptural interpretation from the early fathers through the Reformation. . . . Fifth, I also appreciate Seitz's willingness to incorporate certain gains from various quarters. . . . There is a commendable effort toward balance throughout his proposal. . . . I believe that Seitz's proposal is worth hearing and heeding in many respects."

"[This book] is complex and learned. . . . It is not an easy book to read, but worth the effort. The book is important for the questions it raises--and for some it does not--many of which will never have occurred to people who seek to study the Bible. It should be compulsory--at least in a summarized form--for the crypto-Marcionites who are so vocal in many discussions."

"Seitz makes a strong case for the abiding theological significance of the Old Testament, taken on its own plain-sense terms in a canonical context, which is neither limited to nor isolated from its interpretations in the New Testament. Especially interesting are Seitz's critiques of the developmental-historicist account of the Old Testament. . . . Seitz has provided a dense, thought provoking piece of fine scholarship, which leaves the reader pondering the issues raised and solutions proffered. He does an admirable job of renewing readers' appreciation for the two-testament form of the Christian Bible and its real implications for theological thinking."