How Chemistry Reveals the Creator’s Artistry 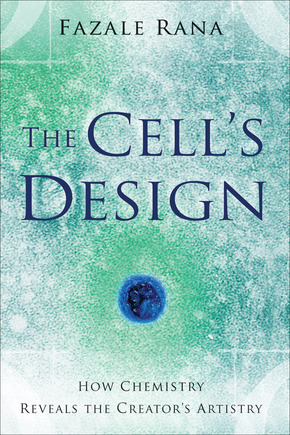 The scientific evidence of design just got stronger.

Armed with cutting-edge techniques, today's biochemists have uncovered startling molecular features inside the cell that can compel only one reasonable conclusion--a supernatural agent must be responsible for life.

Destined to be a landmark apologetic work, The Cell's Design explores the scientific and theological impact of these discoveries. Instead of focusing on the inability of natural processes to generate life's chemical systems (as nearly all apologetics works do), Fazale Rana makes a positive case for life's supernatural origin by highlighting the many biochemical features that reflect the Creator's signature.

This breakthrough book extends the case for design beyond irreducible complexity. These never-before-discussed evidences will evoke awe and amazement at God's creative majesty in the remarkable elegance of the cell's chemistry.

"In Darwin's day, a living cell was thought to be quite simply--for all practical purposes--little more than a microscopic blob of gelatin. Today we know that the cell is among the most organized, complex structures in the universe. Through clear and engaging writing, Fuz Rana lays out what contemporary science has learned about the cell's design, and he poignantly (and provocatively) shows that it is the handiwork of not only an Intelligent Designer but specifically the God revealed in Scripture."--Hank Hanegraaff, president, Christian Research Institute; host, Bible Answer Man broadcast

"As I sat in a class on cell biology at MIT, a thought kept going through my head: This cannot have just happened; someone must have made it this way! I am not the only one who ever thought this. In this book Dr. Rana takes us on a far more detailed tour of the inner chemistry of the cell and shows why that intuition is indeed well-founded; in fact, many new discoveries in biochemistry only make the conclusion stronger. Like William Paley's Natural Theology, which aimed to overwhelm the skeptics with example after example of 'contrivance,' or design, Dr. Rana's book builds a strong cumulative case for design, and thus a Designer, from the way the cell works. Those of us who know the Designer can rejoice with awe at the magnificence of these designs, and we can pray that this book will help those who do not know the Designer to seek after him."--C. John Collins, professor and chairman, department of Old Testament, Covenant Theological Seminary

"Zoologist Richard Dawkins defines biology as 'the study of complicated things that give the appearance of having been designed for a purpose.' Fazale Rana's book plausibly argues that we are dealing with more than the appearance of design. In his well-researched, carefully argued book, he further advances the case for the complex cell's actual design. The remarkable phenomenon of the cell is one that naturalism is profoundly hard-pressed to explain."--Paul Copan, Pledger Family Chair of Philosophy and Ethics, Palm Beach Atlantic University

"Fazale Rana's welcome sequel to Origins of Life makes a significant contribution to the growing scientific literature pointing to intelligent design. This comprehensive and clearly written book develops a panoply of converging biochemical arguments that demonstrate that the best explanation points to a mind of unimaginable proportions. The Cell's Design aptly uses the metaphor of an artistic masterpiece in its development of an analogy between human and biological designs."--Kenneth Boa, president, Reflections Ministries, Atlanta; president, Trinity House Publishers, Atlanta